This antique classic still has plenty of utilitarian value. 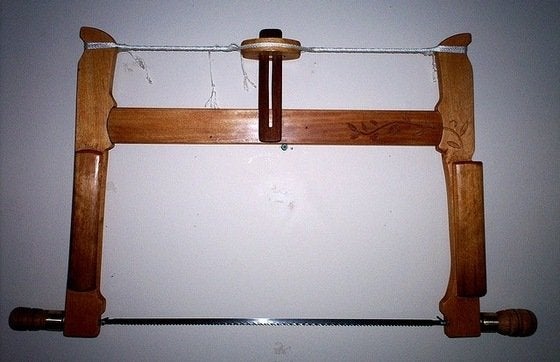 One reason for the fascination of antique tools is their visual ap­peal. For many people, the bow saw has just such an attraction; to my eye, even its shape looks tried-and-true, as handsome as it is utilitarian.

The bow saw is of ancient design; the hacksaw and coping saws are its diminutive and distant contemporary cousins. More than likely, the bow saw was devised to utilize to best advantage a small amount of an expensive material, such as iron and, later, steel. Thus, the sub­stantial wooden elements of the saw provide a framework for holding the metal blade in tension. A woodsman or toolmaker could easily shape these of beech, birch, cherry, or other hardwood, and have to purchase only the long, thin metal blade.

The ends of the blade attach to the cheeks, as the wooden mem­bers perpendicular to the blade are called. Running parallel to the blade across the center of the bow saw is a stretcher. Atop the cheeks is a cord and winding stick that is turned to tighten or loosen the blade. The closer the upper ends of the cheeks are drawn together, the tighter becomes the tension on the blade.

The bow saw can be used for a variety of tasks, both on site and in the shop. In some European countries, the bow saw is a standard woodworker’s tool; in others it is rarely found in the workshop but is often used in the forest. The explanation is more a matter of tradi­tion than of function.

As with any tool, the bow saw takes a bit of practice to master. The larger models require two hands (some users prefer a two-handed grip that distantly resembles that used on a golf-club handle, others like a front-and-back grip similar to that used when hacksawing). A well-balanced smaller bow saw can be comfortably used one-handed. The blade length may range from as little as 15 to as much as 40 inches.

The bow saw is sometimes called a frame saw, although some frame saws are not bow saws. The broader category of frame saws in­cludes those that have two blades (one each at the top and bottom, flanking a wooden stretcher) and some with single blades at the cen­ter. Some frame saws have larger blades and are intended for cutoff work; others have thinner blades that can be turned in the frame so that the tool can be used like an oversized coping or fretsaw.

Not everyone needs a bow saw, of course, but if looks are part of the appeal tools have for you, few tools are more impressive than a handsome bow saw.

The Latest and Greatest Power Tools to Gift Your Favorite DIYer T...