There are many types of wrenches at the disposal of today's DIYers. This guide can help you understand their differences and decide which wrench to use for your next project. 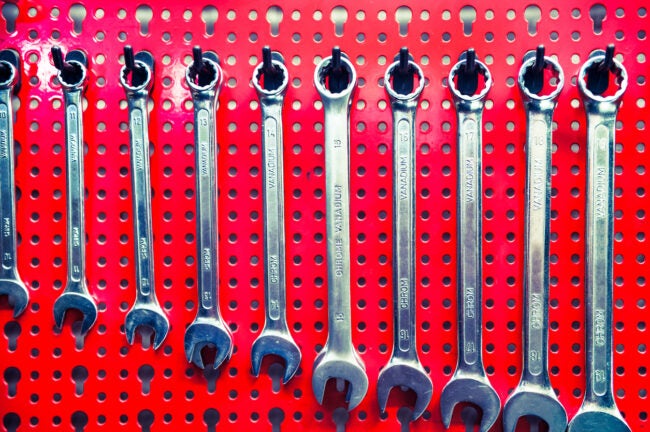 The first nuts and bolts, which were put to use during the early years of the Renaissance, had square heads. The hexagonal (six-sided) design followed soon afterward and remains the dominant variety today, although square heads are still the rule on carriage and lag bolts.

Whatever the number of sides (called flats) on a nut or bolt head, there are several tools designed specifically to tighten or remove them. Each of the different types have significant attributes and dis­advantages, but there are some dissimilarities between box-end, open-end, and combination wrenches.

Wrenches are made with openings that are slightly larger than the nuts or bolts they are designed to fit (typically, the clearance is a few thousandths of an inch). If the fit of the wrench is too loose, however, it will round off the points of the nut or bolt head.

All wrenches are available in many sizes, and can be purchased in­dividually or in sets. A small set may have six to 10 wrenches, ranging in size from perhaps five-sixteenths to one inch. Standard wrenches are sold in sixteenth-inch increments up to one and a half inches (and in metric sizes, too, of course). The length of the tool varies in proportion to its size, ranging from about four inches to almost two feet. The logic is that the shorter (or longer) tool minimizes (or maximizes) the amount of force you can use to tighten a smaller (or larger) nut. This helps avoid shearing off bolts through the application of too much pressure.

Box-end and open-end wrenches are both sold with different-sized wrenches at either end of individual tools. This economical approach means that a five-piece set will actually contain twice that many sizes of wrench.

You’ll also find that two wrenches of the same size and kind can have wildly different price tags. The explanation lies in the materials and manufacturing process. The best wrenches are made of alloys like chrome or vanadium, while less expensive tools are made from molybdenum steel or are simply stamped from sheet metal. The stamped wrenches are bulkier (more material is needed for strength), and are quite useful for occasional light duty. For frequent use, however, and for virtually any automobile applications, more expensive tools will prove the better investment.

These are closed-end wrenches, typically with six or 12 points around the inside diameter of the jaws. The six-pointed jaw is designed to fit hexagonal heads and nuts, while the 12-point configuration will also accommodate a square nut. The ends of the wrench are offset slightly. Box-end wrenches usually offer a firmer grip than do open-end wrenches. The thin wall of the jaw also makes access to nuts in tight spaces easier, but there are situations where these wrenches cannot be used, since they have to be slid on over the end of the bolt. (View example on Amazon.)

The flat jaws of these wrenches are slid around nuts or bolt heads and levered for loosening or tightening. The open ends allow the tool to be slid over the nut in tight quarters where there would be insufficient space for a box wrench or a socket, or where the length of a shaft or pipe interferes. Open-end wrenches are the quickest and easiest wrenches to use, but they will not always fit into tight quarters. (View example on Amazon.)

If space or budget considerations dictate buying only one wrench, an adjustable wrench is likely to be your best investment. The most widely used kind of adjustable is called a crescent wrench in honor of the shape of its jaws; another, called a monkey wrench, is less often used today. (View example on Amazon.)

An adjustable wrench is larger than a fixed open-end or box-end wrench, but one adjustable alone can do the work of a number of fixed wrenches. The crescent has one jaw that is fixed and one that is adjusted by turning a worm screw. Both are open-ended, but their adjustable nature also means that they can be used on inch, metric, Whitworth and other dimensioned bolts.

As flexible a tool as the adjustable wrench is, the limitations of its design prevent it from having the gripping strength of a fixed wrench. It is more likely to round the points on a nut or bolt head: especially when working with machinery, fixed wrenches are preferable. As you use the adjustable, check it periodically for tightness, as sometimes the wrench will loosen.

When using an adjustable wrench, set the jaws to fit precisely over the nut, rocking the wrench slightly as you tighten the jaws to help as­sure a firm fit. Make sure as well that for added strength the nut is positioned as deep as it will go into the throat of the adjustable wrench.

Adjustables can be bought in different sizes. A four-inch wrench, for example, has a maximum “bite” of half an inch, while a 12-inch model opens to one and five-sixteenths inches. Both larger and smaller models, as well as a number of sizes in between, are available.

A sensible strategy is to buy two adjustable wrenches of com­plementary sizes, say, one that is six or eight inches long and another, larger wrench perhaps twelve or fifteen inches in length.

Allen wrenches are steel bars, hexagonal in section, bent into L-shapes. The shorter length is called the head, the longer one the handle. Either end can be slid into matching openings in the tops of bolts or machine screws, most often set screws used in tools and machinery to hold one part firmly in position with respect to another. Pulleys on shafts, for example, are often fixed with set screws that are recessed into the body of the pulley. (View example on Amazon.)

Also known as alien keys, set-screw wrenches, and hex wrenches, these small tools seem utterly irrelevant – until the moment you need one. Then they are the only solution to the problem.

They are manufactured in a variety of sizes, from a sixteenth of an inch up to three-quarters of an inch, though alien wrenches larger than three-eighths of an inch are rare except in working with very large machinery.

Either end of an alien wrench can be used to drive the set screws, but the handle provides more leverage. In some cramped spaces, the shorter one must be used. If added torque is required, a pair of Vicegrips or pliers may prove useful in grasping the handle of the wrench and turning it.

Sockets are another option in the world of wrenches. They are highly convenient and, in experienced hands, allow for remarkably speedy tightening and loosening of nuts or bolts. While they are standard in automobile shops, they have a number of uses elsewhere, in particular when working with machines. (View example on Amazon.)

The sockets themselves are cylindrical receptacles. One end has points that resemble those in the jaw of a box wrench, while the other has a square hole into which the driver mechanism fits. In­dividual sockets are referred to by the square opening (the drive size) and the dimension of nut over which the opposite end will fit.

The handle that drives the sockets may resemble a screwdriver, though more common are ratchet handles. The ratchet eliminates the necessity of removing the socket from a nut only to refit it for another stroke when working in tight quarters where there is limited room to swing the handle. The tool will turn the bolt when swung in one direction, but will return without backing up the socket. A lever allows the process to be reversed, so that the tool can be used alter­nately for tightening or loosening.

There are also cranks, extensions, hinged handles, universal joints, and other devices that are used to drive the sockets.

The sockets, and the attendant mechanisms, come in many sizes. A truly complete socket set, in fact, might well consist of several hundred pieces at a cost of many hundreds of dollars. However, a good basic household socket set with about half a dozen sockets (ranging from a quarter inch to perhaps five-eighths of an inch) and a ratchet and extension will prove useful for driving lag bolts, oc­casional repairs, and other tasks.

The Best Adjustable Wrenches for Your Repair Needs

How To: Store Your Tools in Your Workshop (and Keep Them Accessible)

The Best Wrench Organizers to Keep Your Tool Box Tidy

The Best Allen Wrench Sets for Your Tool Box