Go into your local lumber yard with confidence once you understand the basics of lumber grades and numbers. 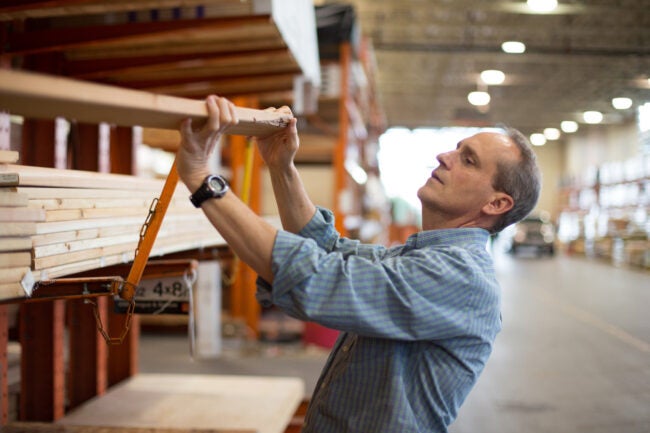 Lumber grading is tricky and often counterintuitive. The grading system for white pine alone consists of about ten levels. If you are going to work with wood professionally, I’d suggest you consult a basic reference work on wood and master some of the subtleties. But most of us need to know only a couple of basic facts.

Whatever the kind or size of wood you’re buying, the unit of mea­surement is usually the board foot; one board foot is the equivalent of the cubic content of a piece of wood twelve inches by twelve inches square and one inch thick. Wood is usually priced on a board-foot basis, though some specialized stock like moldings is sold by the linear foot.

Standard dimension lumber, as well as pressure-treated stock, is sold in a wide array of two-inch pieces (the dimensions refer to sizes before planing, so nominal two-by stock is actually one and a half inches thick). Two-by-threes, fours, sixes, eights, tens, and 12s are standard (actual widths: three and a half, five and a half, seven and a quarter, nine and a quarter, and eleven and a quarter in­ches). Common lengths are eight, ten, 12, 14, 16, 20, and 24 feet. Four-inch thicknesses are also sold in some widths.

Plywood is made of thin layers (“plies”) of wood that are glued together to form panels. Each ply is glued with its grain per­pendicular to the adjacent plies for added strength.

Many varieties of plywood are sold. Finish plywood has at least one quality surface, while sheathing plywood, intended for use beneath siding, has rougher surfaces.

Most plywood is stamped with a letter designation that indicates the quality of its surfaces. The gradation extends from A to D, so a sheet graded A-A, for example, has quality surfaces on both sides, while A-C has one good surface and one rougher one. In brief:

Plywood is sold in a variety of thicknesses, commonly from a quarter to three-quarters of an inch. Some plywood is cemented using waterproof glues for exterior applications, and graded using the code “EXT” for exterior use (conversely, plywood marked “INT” is intended for interior use). Four-foot by eight-foot sheets of most plywood are standard.

Are You Buying the Right Amount of Lumber?