5 Tips for Building and Using a French Cleat Wall

Organize and store tools and other implements neatly by creating a wall of sturdy French cleats. 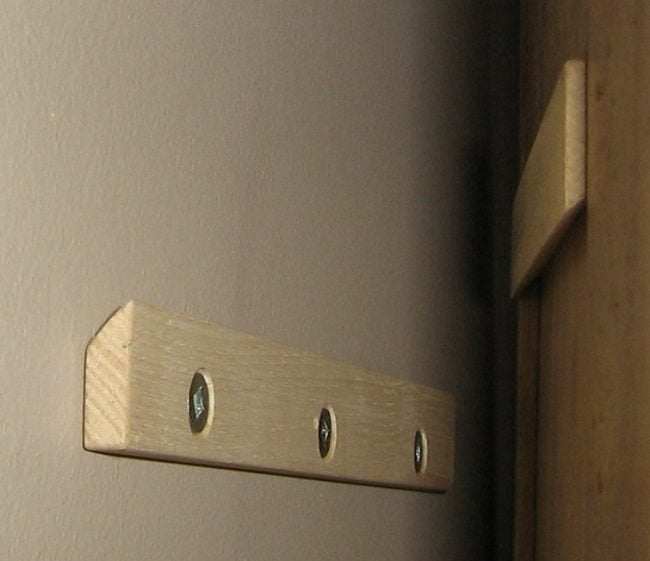 It may sound fancy, but a French cleat is simply a sturdy beveled support board, a secret that builders and craftsmen rely on to hang heavy items, such as large mirrors, artworks, and cabinets. It’s also become popular to cover as much as an entire wall with French cleats to organize and store tools and utensils. Similar to a pegboard wall but with far greater holding power, a French cleat wall is an excellent way to arrange a garage, workshop, or even pots and pans in a kitchen. If you’re looking to build a French cleat wall (including the tool holders that go on it), read on to understand the basics of how the mechanism works and then check out our five pro tips for success.

RELATED: 12 Ideas to Steal from the Most Organized Garages

The purpose of any cleat—a horizontal board attached to a wall—is to help support a heavy item, but a French cleat improves on the concept by beveling the top edge of the cleat to slope downward in back. If you feel the top of an installed French cleat with your fingers, you will notice how the front edge is higher than the back. To support a tool holder, a second, upside-down beveled cleat is attached to the back of the tool holder: Position the second cleat over the lip of the installed wall cleat and—voila!—the two cleats interlock securely.

By installing multiple French cleats, parallel to each other and spaced a few inches apart, you can build a French cleat wall of any size and design that enhances your workspace needs. You can cover an entire wall with French cleats or install them only on the top half, leaving the bottom open for workbenches or rolling tool chests.

Building a French cleat wall involves cutting the cleats on angles and then attaching them securely to an existing wall, so you’ll need a basic knowledge of carpentry principles, including the ability to measure accurately and make clean cuts using a table saw.

French cleat walls are usually made from plywood, but don’t use the cheapest plywood (Grades C and D), which often contains knots and weak spots that would compromise the results. Opt instead for Grade A or Grade B plywood, which is denser, smoother, and less likely to warp and splinter. You’ll also decide between ½-inch or ¾-inch thick plywood; for storing power tools and other heavy objects in a typical garage or workshop setup, ¾-inch plywood will offer better support. If building a French cleat wall in a home office or kitchen and hope to avoid a bulky appearance, ½-inch plywood will provide a leaner look while offering adequate support for items like pots and pans.

The angle of the beveled top edge of a French cleat is 45-degrees, and if you have a miter saw or table saw, cutting the cleats will be a snap. Cutting bevels on any other type of saw is more difficult, so if you don’t have a table saw, ask the folks at the lumberyard where you purchase the plywood to rip it into cleats for you.

The width of the cleats is up to you. To get, for example, 2½-inch wide cleats, first “rip” the plywood into straight five-inch strips on the table saw (ripping refers to cutting the material lengthwise). After all the strips are ripped, adjust the saw blade to cut on a 45-degree angle and rip each board down the center to create two French cleats. Each narrower board will now have a 45-degree angle and can be installed as a cleat on the wall.

Trying to balance and level a cleat as you attach it to the wall can be tricky, so rather than attempt it freehand, draw a guideline on the wall. You’ll need a carpenter’s level (the longer the better) and a pencil. Position the carpenter’s level where you want the bottom of the lowest cleat on your wall, and draw a line along the level’s top edge. If possible, recruit a helper for this task so you can hold the level perfectly still with both hands as your helper draws the line. This will give you a level guideline for the first cleat, and after the first cleat is in place, simply position another cleat on top of it, hold it there, and then draw another line along its top—that’s the second guideline for the next cleat. Continue to make a new guideline for every cleat you install and each one will be level.

In order for a cleat wall to be strong enough to hold numerous heavy items, the cleats must be securely attached to the wall. Use a stud finder to locate the center of a stud, and then snap a vertical chalk line from the top to the bottom of the stud. (Don’t have one? Pick up one of the recommendations for the best stud finder that we shared in our shopping guide.) Do this for every stud that lies beneath the intended cleat wall. The lines will serve as guides for positioning the screws.

To attach a cleat, you’ll need to insert one, three-inch #10 screw through the cleat into every stud it crosses (use the vertical guidelines for reference). But before you can insert a screw, you’ll need to drill a pilot hole in the cleat. Because the tool holders need to sit flush along the surface of the cleats, the screw heads must be recessed. Use a 7/16-inch countersink bit to drill the pilot holes. The countersink bit will drill a hole with a slightly wider indentation at the top, which will allow you to recess the #10 screw heads just below the surface of the cleats.

5. Finish and Use the Cleat Wall

After installing as many cleats as necessary to complete your French cleat wall, sand the cleats to smooth away any splintery edges. Painting isn’t required, but brushing on a clear coat of polyurethane will protect the wood and make it easier to wipe away spills. The design of the tool holders you build for your cleat wall is totally up to you (you’ll find numerous design ideas online), but remember to install a short upside down cleat on the back of each one to place the tool holder on the cleat wall. Depending on how large a tool holder is, you may want to install two or more cleats along its backside to offer additional support when you hang it on the cleat wall.

10 Things You Should Never Store Under Your Bed

10 Ways to Furnish Your Home at Target for Under $50

18 Photos That Prove Home Organization Is an Art Form