Learn about the pros and cons of these popular power tools to decide what’s best for your woodworking projects and level of carpentry skill. 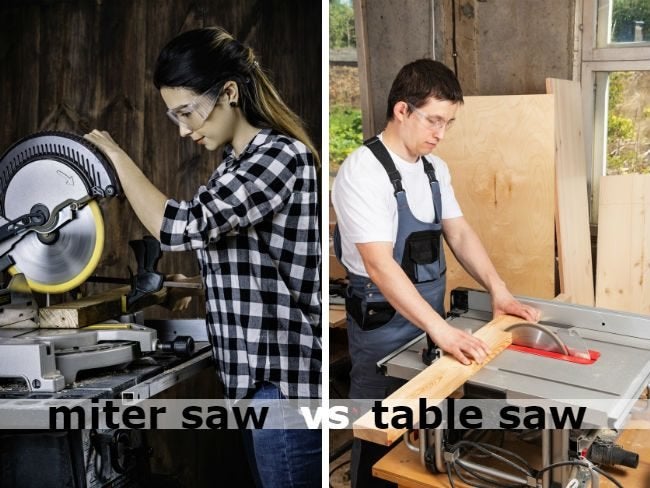 Power saws have changed the woodworking industry, giving DIYers the muscle they need to create large projects in a short amount of time. Table saws and miter saws are two of today’s standouts, popular in home workshops. While each one relies on different principles to cut wood, their uses overlap in a number of areas. If you’re ready to take your carpentry skills to the next level, you ultimately may want to own both of these saws! But to be sure, first examine the two side by side—miter saw vs. table saw—in this guide to learn how they differ and to understand the pros and cons of each.

RELATED: 7 Types of Saw Every DIYer Should Get to Know

Table saws are better at cutting large pieces of wood.

A table saw features a flat table that supports wood as it’s being cut. The user controls and pushes the wood, feeding it into a spinning saw blade in the center of the table, making it an excellent tool for cutting large pieces, such as four-foot-by-eight-foot sheets of plywood. With a miter saw, the user places a strip of wood, such as a trim board or a siding plank, on a narrow base at the front of the saw, and then manually lowers the spinning blade (via a handle encased in a moveable head) to cut off the end of the strip.

The verb “miter” means to join two pieces at a 90° angle, such as the way the corners of a picture frame meet, and a miter saw makes cutting angles a snap. The head of a miter saw can be swiveled from side to cut any degree angle necessary. For this reason, miter saws are a staple of the trim carpentry industry, as they cut the complex angles necessary for installing trim and crown molding It’s more difficult to cut angles with a table saw because the user must position the wood at the correct angle and hold it steady while feeding it through the spinning blade.

In addition to cutting off the end of a board on an angle, the head of a miter saw can be tilted laterally to cut a bevel at the same time, creating a sloped edge instead of a flat edge. Beveled cuts are used mainly in trim work to allow for seamless transitions when installing trim in corners. The blade on a table saw can be adjusted from beneath the table to cut on a bevel as well but, like cutting angles, cutting bevels is also more challenging on a table saw. Cutting bevels on a table saw is an advanced carpentry technique; woodworking newbies will be more successful using a miter saw.

The width of the blade defines the length of cut on a miter saw.

Since a miter saw is operated by lowering a spinning blade, it cannot make a cut that’s longer than the width of the blade. Miter saws come in eight-inch, 10-inch, and 12-inch blade widths. The wider blades are necessary for cutting wider material, such as siding planks and large crown molding. An exception to the blade-width rule is the sliding-arm miter saw, which comes with a handle that can be pulled outward while the blade is spinning to make a longer cut—up to 16 inches long. A table saw, on the other hand, can cut any length of the board because the blade is stationary, and the wood is fed into the blade.

Although some table saws come with wheeled stands that allow the user to roll them from place to place, most table saws are considered stationary and are bolted to solid steel legs or built into a cabinet, making them heavy (up to 300 pounds), unwieldy, and difficult to move. Most miter saws are in the 50- to 60-pound range and can be loaded in the back of a pickup or the trunk of a car, or just carried where needed. If you intend to create all your woodworking projects in a workshop, the miter saw can be bolted to an immobile countertop to make it stationary.

A miter saw is more precise because the wood is held snugly against the back of the saw (called the fence) during the entire cut. With a table saw, the wood is constantly in motion, and if the user varies the pressure on the wood as it’s being pushed into the blade, it can cause slightly jagged areas on the cut edge of the board. The slight imprecision that can occur on table saw cuts usually won’t affect large projects, such as building a storage shed, but can result in an amateurish look if installing trim. When precise cuts are vital, use a miter saw.

A table saw can have potentially dangerous kickback.

A table saw is more versatile than a miter saw.

While a miter saw cannot cut large pieces of wood, a table saw can make virtually any cut a miter saw can make—with a lower level of precision. A variety of accessories can be purchased to use with a table saw, such as a miter gauge to simplify making angle cuts, but it’s important to understand that while a table saw is more versatile, making complex cuts on it requires advanced carpentry knowledge and skill. Beginner woodworkers should not attempt to make angled and beveled cuts on a table saw because doing so increases the risk of injury.

A table saw is more expensive.

Miter saws start around $100 for a compact eight-inch model and run as much as $1,900 for a contractor-quality sliding miter saw. Table saws with an attachable stand start around $200 and run up to $2,800 for a high-end saw in a built-in cabinet. Serious DIYers can get a decent miter saw for around $250 (view example on Amazon) and a good table saw for around $450 (view example on Amazon).

The First Power Saw New DIYers Should Buy, According to Experts
Advertisement

Chop Saw vs. Miter Saw: What’s the Difference Between These Cutti...

Jigsaw vs. Reciprocating Saw: Which Cutting Tool is Best for Your...

The Best DeWalt Table Saws of 2022

The Best Miter Gauge to Add to Your Worktable