Compare single-stage vs. two-stage vs. three-stage snow removal machines to pick the one that’s best to help you breeze through a predictable winter chore. 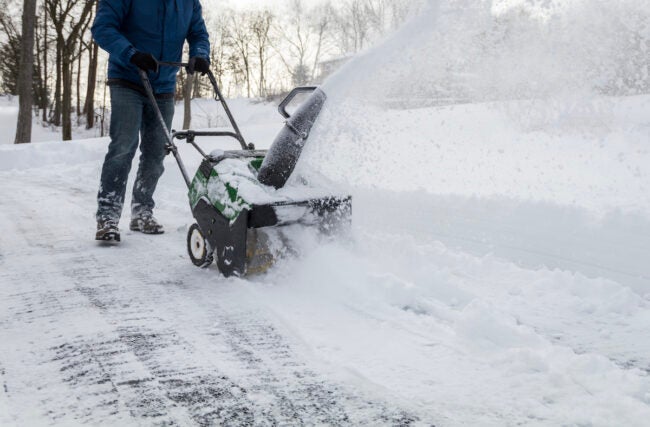 Today’s snow removal machines make quick work of clearing the white stuff from driveways and sidewalks—saving your back from the strain of shoveling and tossing aside heavy snow. Yet while the terms “snow blower” and “snow thrower” are often used interchangeably (even by manufacturers at times), the two machines are actually quite dissimilar in terms of power, functionality, and price. We’ve put these two side by side—snow blower vs. snow thrower—to identify six notable differences. Keep reading to find out which snow removal machine is best suited to your climate, property, and budget.

A snow blower is more powerful than a snow thrower.

A snow thrower is single-stage machine, meaning it gathers snow and tosses it out a chute in a single motion. The power generated by a horizontal spinning auger picks up the snow while also creating the force that expels snow out of a discharge chute, usually to a distance of 15 to 25 feet away.

A snow blower works in two stages; like a snow thrower, it has a rotating auger to scoop up snow, but the snow is then fed into an impeller, which is akin to a powerful fan that launches the snow up to 35 feet away, or farther. At the even more powerful end of the snow blower spectrum are three-stage blowers that feature accelerators that chew through hard-packed snow and even ice, crushing it and feeding it into a mighty impeller that can launch snow up to 50 feet away.

Single-stage snow throwers are on the smaller side, and they remove snow in swath widths between 11 inches and 22 inches, depending on the individual machine. Two-stage snow blowers can clear up to a 26-inch swath of snow, while three-stage snow blowers can remove as much as 30 inches of snow in a single swath. In areas that get frequent snows, a snow blower that removes a wider swath will significantly reduce the amount of time spent clearing away snow.

Single-stage snow throwers are often powered by an extension cord, which limits their use to the length of the cord and requires access to an electrical outlet. Some newer snow throwers are powered by rechargeable lithium-ion batteries, so they are not limited by distance, and they will run 20 to 45 minutes on a single battery charge. Snow blowers, on the other hand, are usually powered by gasoline or diesel, so they’re not restricted by the length of a cord and allow the user to clear snow until they run out fuel.

Snow throwers are easier to store and maintain.

Corded and battery-operated snow throwers tend to be smaller machines that don’t take up much room in a garage or shed, whereas some gas-powered two- and three-stage snow blowers are nearly as large as a garden tractor and require ample room for storage. Because they don’t use fuel, battery-operated and corded snow throwers don’t require the storage of flammable gasoline (nor do they don’t create fumes while in use). Plus, a gas-powered engine must be regularly maintained, which includes checking and adding oil when necessary and changing the gas filter and spark plug annually.

RELATED: What to Do When Your Snow Blower Won’t Start

As with most types of machines, as the price ticks up, so do the bells and whistles. Check out some of the most common options for each type of snow thrower and snow blower.

Pro Tips: The Best Ways to Deal with Snow and Ice

Turn Your Lawn Tractor into a Snow Plow or Blower

7 Mistakes Not to Make in Your Bathroom Remodel

The 10 Most Indestructible Dishes You Can Buy