How To: Use a Speed Square

This nifty measuring miracle will guide you through all sorts of DIY carpentry projects. Learn the basics here! 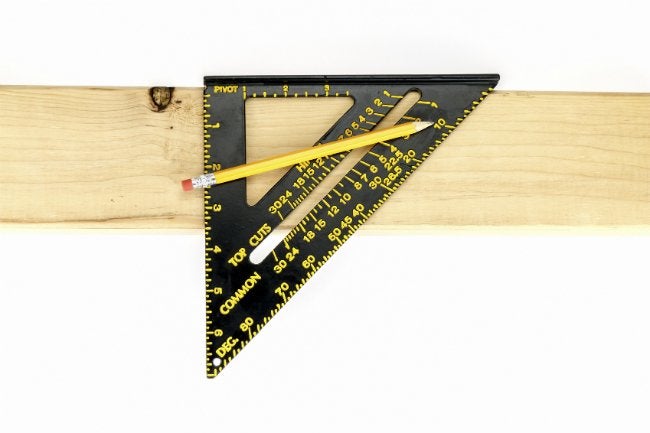 Planning a carpentry project? Quick, grab a speed square! Also known as a rafter square or triangle square, this simple tool, invented by Albert Swanson, has been making woodworkers’ lives easier since 1925, thanks to its versatility and affordability. More than 80 years later, you can still use this multitasking wonder as a scribing tool, a protractor, a miter square, a try square, or even a saw guide. It makes easy work of everything from building stairs and cabinets to measuring roof pitches to making picture frames and birdhouses.

Before we get started, here are a few pieces of terminology you’ll need to know:

Once you get the hang of the speed square, you’ll find few tools quite as handy. Below, learn how to use a speed square to its fullest potential!

Line Scribing with a Speed Square

When you’re constructing cabinetry, building sheds, or working on other projects that necessitate lots of long, straight cuts, line scribing makes your job easier by letting you quickly mark exactly where to saw. When I was a kid, my dad made cut lines on plywood so fast with his speed square that I’d be boggle-eyed impressed.

Not every speed square has the markings and notches needed for scribing. Look for one or two rows of notches, each a quarter inch apart, in the open middle of the speed square. Fit your pencil’s tip into the desired notch (if, for example, you’re looking to cut two inches from a plywood board, you’d choose the notch at the two-inch mark), then drag both your square and pencil along the edge of the board. In seconds, you’ll have marked a straight line completely parallel to the edge and as long as you need, potentially as long as the board itself.

The square can be flipped over to be butted on any side of the board, allowing for perpendicular scribing so long as that line is within the width of your square. For lines further into the center of the board, brace the square’s lip against the board so that the tool can act as a firm perpendicular edge to butt a ruler or yardstick up against.

Finding Angles with a Speed Square

Whether you want to make a nice pitched roof on your kids’ treehouse or you need a utility ramp for your shed entrance, getting the right angle on every side is tricky work that can be simplified with your speed square. First, brace the speed square lip against the side of the board you’re working with. The other arm of the right angle will point away from you. Look at the degree marks along the hypotenuse, and you’ll see that this arm marks a 90-degree angle. Holding the pivot point in place, swing the speed square lip away from the board. Find your desired angle along the hypotenuse—for instance, if you want to mark a 30-degree angle, perfectly align the 30-degree tick mark with the edge of your board—then hold the square firmly in place, and draw your 30-degree line along the edge of the speed square that is opposite the angle readings and also perpendicular to the tool’s lip. Always use this edge to mark angles; use the hypotenuse for marking only 45-degree cuts. (See the next section on using the tool as a miter square to learn how to do this.)

Using the Speed Square as a Miter Square

Using a Speed Square as a Try Square

The 90-degree right angle leading out from the pivot and the lip makes quickly and accurately finding right angles a no-brainer. This is especially helpful when you’re faced with repetitive cuts in projects like deck-building. Simply brace the lip against the edge of your board, run your pencil straight up the right angle, and there’s your 90-degree line for cutting!

Using the Speed Square as a Saw Guide

When you’re looking to save time on sawing the endless boards needed for that new deck, a quality metal speed square can be a real asset as a saw guide. By skipping pencil lines and setting the tool directly on the board you’re cutting, you both eliminate steps and offer a sturdy edge for straighter, faster cuts. Pro safety tip: Brace the square’s lip on the side of the lumber that’s away from you so that as you hold the square in place, you’re practically pulling the braced square and lumber toward you. Then, when you’re running your circular saw against the square’s edge and pushing the saw away from you, you’ll have better control of the lumber. The opposing forces cancel each other out, making the board more stable.

Look for a strong, large speed square with as many features as possible—maybe even a built-in level—and you’ll never start another DIY job without it.

TAGS:
HOW TO
USE
TOOLS
More From Bob Vila

How To: Use a Fireplace
Advertisement

The 11 Handiest Ways to Use a Hot Glue Gun