The drill press is a fixed-in-place version of the simple hand drill with a worktable beneath. 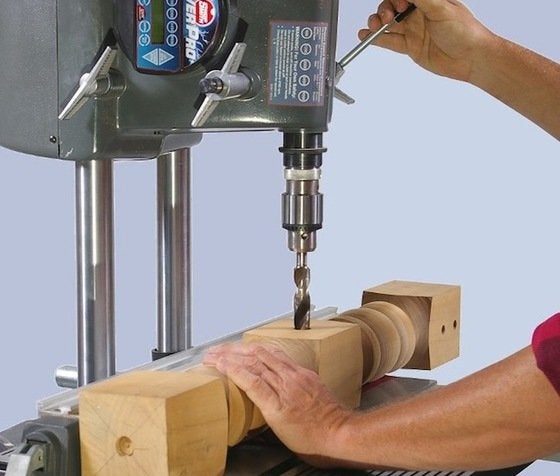 The drill press is a fixed-in-place version of the simple hand drill with a worktable beneath. A hole at the center of the table allows the drill bit to pass cleanly through the workpiece. A drill press can be purchased as a benchtop tool or as a freestanding floor model. For most home workshops, a benchtop model will perform all jobs asked of it at a somewhat lesser cost.

The drill press has significant advantages over the hand-held drill, the principal one being accuracy. Its design means that it will drill at precise angles to the workpiece (usually ninety degrees); and it will drill holes of identical size and depth and position as many times as you wish.

As with a band saw and jigsaw, the flexibility of the tool is determined by the size of the throat, the distance between the supporting column at the rear and the axis on which the spindle of the drill turns. A throat of seven and a half inches is common; such drill presses are referred to as fifteen-inch models because they will cut to the center of a fifteen-inch workpiece.

The depth of cut is determined by the length of the hit. of course, but also by the length of the column. Benchtop models are, obviously, shorter than freestanding presses. Both benchtop and freestanding models have heavy cast-iron bases that can be bolted in place. The worktable slides up (or down) along the column; in the case of the free standing models, the travel is much greater. Some models are designed so that the worktable can be tilted for drilling angled holes.

Bench drills, as bench-mounted models are often called, are powered by electric motors mounted behind their columns. The motor spins the drill itself, driving it via a system of belts and pulleys or gear wheels, depending upon the model.

At the lower end of the spindle is the chuck, into which the bits are inserted and tightened, just as they are in a hand drill. The spindle itself slides in and out of the head of the drill press in a cylinder called the quill; a hand-powered lever mechanism drives the drill down as it spins; a spring pushes it back up when pressure on the lever is released. Half-inch chucks are usual on home workshop presses, but five-eighths-inch and three-quarter-inch chucks are found on the largest tools.

The throw of the drill is adjustable, depending upon where the depth stop is set. When countersinking screws, for example, setting the depth stop makes the work faster and more accurate.

Horsepower ratings vary depending upon the size of the drill, ranging from as little as one-sixth horsepower to two horsepower or more on the largest presses. However, it is the variability of the speed at which the drill is driven that determines the versatility of a particular drill press. As with other cutting tools, slower speeds are suited to cutting metals, higher ones to wood. Exceptions are large-diameter drill bits or attachments like a circle-and-hole cutter, which should be used at slower speeds.

Attachments. There’s a remarkable range of drills available to cut circular holes, including spade, brad point, twist, extension, and Forstner drills. And there are plug cutters, too. Router bits can also be fitted to a drill press, although the rotation speed of most drill presses isn’t fast enough to make good, clean router cuts. Rotary rasps, dovetail groovers, and even a mortising attachment can be used.

The Best Magnetic Drill Presses to Add to Your Workshop

The Best Drill Presses of 2022