It’s All In The Details—Acanthus Leaves 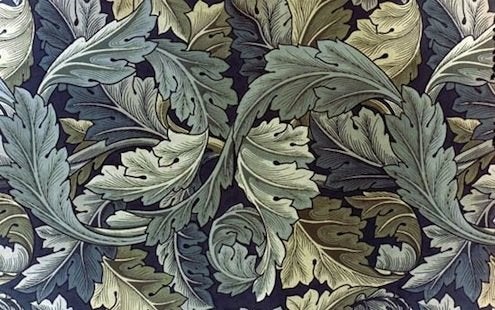 Leaves are very much on my mind these days, what with all of the raking, blowing, bagging and mulching that goes along with having a yard full of maple trees. However, a different type of leaf has remained in the forefront of architecture and design since ancient Greeks first used it to adorn the tops of columns: the acanthus leaf.

Acanthus leaves are among the most common plants to be used as ornamental elements in architecture and interior design, and historians say the earliest known example is the Temple of Apollo Epicurius at Bassae, dated 450-420 BC.

There are several species of acanthus plants found throughout the Mediterranean region. The two most common varieties found in early architecture are Acanthus spinosus and Acanthus mollis. Both varieties feature deeply cut leaves that lend a graphic and sculptural element to columns, borders, and corners. In fact, the prefix acantho- means thorny, and the scientific name is drawn from ake, meaning a sharp point.

Carved stone, wooden, and metal acanthus leaves are found throughout ancient Greece, particularly in Corinthian columns and friezes. The Romans adopted the motif and used it extensively on nearly all important public and private buildings.

A Roman writer named Vitruvius (75 BC to 15 BC) relates a story about the origin of acanthus leaves as a pattern, stating that the Greek architect and sculptor Callimachus had been moved by the sight of a basket that was left on the grave of a young girl.

According to legend, the basket contained the child’s toys, and a tile had been placed over the basket to protect them from the weather. An acanthus plant had grown around and through the basket, mixing its leaves with the weave of the basket, thereby inspiring Callimachus—credited as being the inventor of the Corinthian order—to use the same images in his architecture.

The original, acanthus leaf motif on the Corinthian capitals of the Pallazo Ducale a Venezia. Photo courtesy of Giovanni Dall’Orto

The use of acanthus leaves continued to grow throughout the Roman Empire and reached its height during the Byzantine period, when many buildings featured allover acanthus decoration. The motif was also used in medieval art, tapestries, and sculpture and is found in many of the illuminated manuscripts of the period.

The Renaissance saw a veritable explosion of acanthus leaves, with the pattern showing up in architecture, sculpture, painting, tapestries, furniture and textiles.

The motif also was particularly popular in the court appointments and furnishings of Louis XVI in France.

Modern popularity of acanthus leaves can be traced to the English Arts and Crafts Movement of the late 1800s, most closely associated with William Morris, the famed English textile designer, artist, and writer. Morris used acanthus leaves extensively in nearly all of his designs.

Today, the acanthus leaf is used extensively throughout home design in structural elements, including moldings and hardware, and in decorative components, such as furniture, lighting, decorative hardware, carpets and area rugs, mirrors, upholstery fabrics, window treatments, and bed and bath fashions.

These are leaves that you actually want in your home—no raking required!

For more on architectural and interior design history, consider:

It’s All In The Details—Pineapple Style
Advertisement

It's All in the Details—The Greek Key