How to Grow Agave

These drought-tolerant plants are attractive even without their flowers, which might not appear for years or decades. 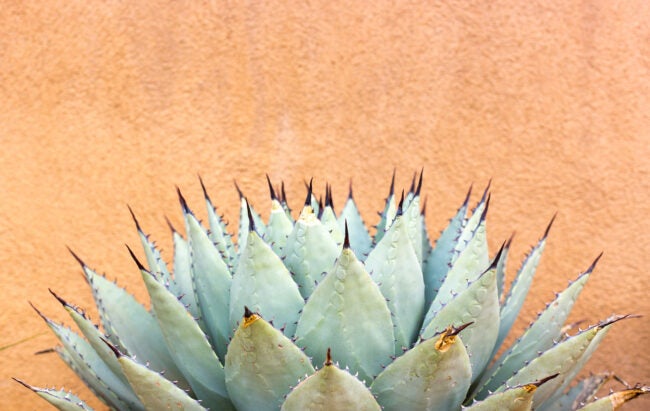 Agave americana is called the American century plant because grumbling gardeners once thought it took that long to flower. However, the wait usually isn’t more than 30 years, with some agaves blooming within 10 years. If you were to pass on after flowering, you might put it off, too!

Fortunately, agave plant care is easy, and the plant usually makes pups that carry on after it dies. If provided with its preferred conditions, this type of succulent can take care of itself and is as tough as the “nails” which often tip its leaves. With its bad-boy good looks, who needs an agave plant flower, anyway?

Growing Agave at a Glance

Native to Mexico, the West Indies, and the U.S. Southwest, agaves make rosettes of green, gray, blue, or variegated—often toothed and spiny—succulent leaves, some sword-shaped, some shorter and squatter. At maturity, the different types of agave plants vary in height from 1 foot to 6 feet and their flower spikes from 6 feet to 35 feet.

An agave plant bloom is hard to predict, since most species don’t flower until near the end of their lifespans—a period as short as 5 years or as long as 30 years or more. Each rosette produces only one spike, initially resembling an asparagus spear, which shoots up to look more like a telephone pole. Some species flower on that spike and others make horizontal branches that bear panicles of white, green, or yellow tubular blooms. After they wither, so does the original plant in most—though not all—agave species.

Proper planting sets an agave plant up for success in its long life to come. When choosing an agave, consider the hardiness zone you live in if you plan to grow it outdoors, as well as its size if you’re planting it in a container. (A. bracteosa and A. colorata are a couple of container options.)

If you have children or pets who will be playing in the vicinity of your agave plants, you’ll probably want to choose softer, “friendlier” species such as A. attenuata. It doesn’t have spines, making foxtail agave plant care a bit easier than that of more prickly types.

When is the best time to plant agave?

Agaves should be planted in spring—between March and May, after the last frost passes. If you purchase one from a local nursery, take note of which side faces south so you can position the plant in the same way once you get it home, thus reducing transplant shock.

Where can agave grow?

Choose a site that receives at least 6 hours of sunlight per day and has excellent drainage. Preferably, place the agave at the top of a mound or slope with sandy or gravelly loam that doesn’t contain much humus. If you have clay soil instead, mix in decomposed granite or pumice to make it lighter.

How do you plant agave?

If the plant hasn’t already been growing outdoors, expose it to sunlight gradually over a period of a week or so.

Can you grow agave plants in containers?

Agaves grow well in pots and can serve as houseplants in climates where they aren’t hardy. Choose pots that are heavy, shallow, and wide for larger agaves—making sure that the containers have drainage holes—and fill them with a cactus and succulent potting mix. Potted agave plant care has requirements similar to that for plants in the ground: lots of sun and not much water.

Because agaves store moisture in their leaves, they don’t need large amounts of it to survive and are more likely to die from too much of it rather than too little. In summer, water them no more than once per week, cutting back to no more than once every 2 or 3 weeks in winter. Of course, If Mother Nature provides water through rainfall, you won’t have to. If she provides too much water in your climate, so that the agaves rot, consider placing them in raised beds, on mounds, or in containers for better drainage.

Agaves growing in containers need regular and sufficient watering. However, always check to make sure the container’s mix is at least half-dry before giving it more water.

Because they originated in “poor” soil, agaves don’t need many nutrients to survive, and some gardeners don’t fertilize them at all. If you prefer to do so, use a type of plant food intended for cacti and succulents such as 1-2-2, in which the first (nitrogen) number of the ratio generally is smaller than the last two. If you prefer to use a balanced all-purpose fertilizer such as 10-10-10, apply only about a fourth of the amount recommended once in early summer.

Fertilizing agave might force it to bloom sooner, so keep that in mind. If you fertilize an agave, only do so during its growing season, not in winter. Container-grown agaves might benefit more from fertilizer.

RELATED: 13 Types of Cactus Plants You Can Grow At Home

To propagate these succulents by offsets, simply find one of those agave “pups,” which has its own roots, and cut it free from the mother plant, potting it up separately.

Charles Merbs of the Central Arizona Cactus and Succulent Society recommends sowing agave seeds in a container filled with a mix of one part potting soil and one part sifted crushed granite. Lightly cover the seeds to a depth of only half their diameter with the mix. If the container is kept warm in bright, indirect light, the seeds should sprout in 4 to 8 days or so.

Many agaves have both jagged teeth on the edges of their leaves and sharp spines at the tips of those leaves. Some growers prefer to snip the spines off to prevent them jabbing passersby, but you may instead opt to keep the plants in an out-of-the-way spot where they can be admired from a distance.

Agave sap contains calcium oxalate crystals that could painfully irritate and ulcerate the mouth of any person or animal who tries to eat the plant. That sap also can cause a stinging and blistering rash wherever it comes into contact with bare skin.

Agaves commonly suffer from crown rot due to an overabundance of moisture collecting inside their rosettes of leaves. To prevent this, grow them in a very well-draining location and water the plants from the side to avoid pouring water directly into the rosettes.

The plants also attract inch-long black agave weevils, which chew holes in the agaves to lay their eggs there, introducing a bacterial rot exacerbated by larvae digging deeper into the foliage. Dispose of all affected plants. You could also try applying an organic insecticide that kills grubs in the soil.

Gardeners growing agaves in pots likely will want to bring them indoors over winter to protect them either from freezing temperatures or too much precipitation.

When is the best time to bring agave indoors?

In zones where agaves aren’t hardy, bring them indoors before your first fall frost. Although some tolerate mild frosts, freezing temperatures may turn the more tender types—such as the foxtail agave—to mush. Others, such as the artichoke agave, can survive temperatures below zero, but usually only in dry climates.

How do you overwinter agave?

Don’t fertilize your agave during fall or winter. Plants growing outdoors might need a blanket or thermal wrap if temperatures dip below normal lows for the region. For wintering agave indoors:

RELATED: Solved! Why Are My Succulents Dying?

If you are just learning about how to care for agave plant, consult the questions below for brief answers or the article above for more extensive ones.

Q. How often should agave be watered?

Water your agave about once a week when there isn’t any rainfall, only about once every 2 to 3 weeks during winter, but, again, only if there hasn’t been any precipitation or the container soil feels dry.

Most agave plants should receive at least 6 hours of sunlight per day, but some species such as the foxtail type can thrive in partial or full shade.

Q. How fast does agave grow?

As has been proved by how long they take to flower, agaves mature slowly. As they age, they also can spread as they produce pups.

Q. Is agave the same as aloe vera?

No. Although the century plant (Agave americana) sometimes is called American aloe, it is an entirely different plant than Aloe vera.

Q. Why is my agave plant dying?

Agave plants are most likely to die from overwatering, which rots their crowns or roots. If an agave bloomed recently, that signaled the end of its life and it’s time to transplant a pup or purchase a new plant.

Looking for more low-maintenance plants? Check out our guides on growing citronella, lantana, and marigold.

How To: Propagate Succulents
Advertisement

Could a Ban on Ornamental Grasses Aid Water Conservation?

How To: Grow Potatoes

How to Grow Hibiscus

How to Grow Petunias