How to Grow Marigolds

Grow marigolds for their many benefits, including beauty, summerlong blooms, and uncomplicated care. They can make even beginner gardeners feel like they have the Midas touch! 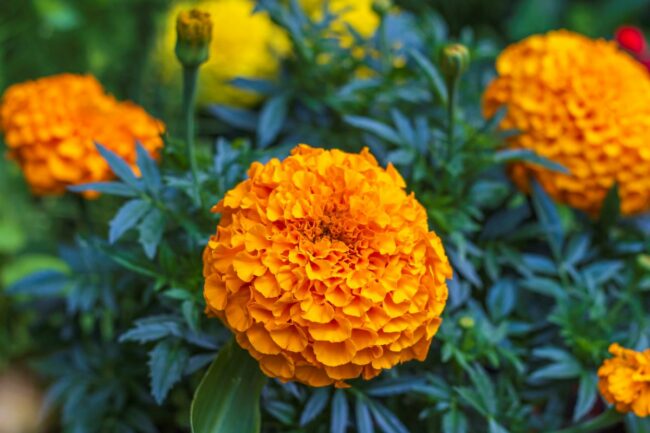 Marigold care is easy, since the plants thrive almost anywhere they have sun and well-draining soil. They are often grown as companions for vegetables because of their reputed ability to repel insect pests and parasitic nematodes. According to the University of Florida, however, “simply planting them alongside another crop has not been shown to reduce nematode populations.”

The best marigolds for vegetable gardens are low-growing French types not likely to shade your crops. You may also want to raise the gem variety there, since its marigold sprouts can be consumed as microgreens. Marigold companion plants include eggplant, potato, and squash.

Of course, plenty of gardeners of all skill levels grow these bright, easy-care flowers in containers, window boxes, or flower beds just for the joy they bring.

Growing Marigolds at a Glance

Marigold flowers can really brighten a garden. African cultivars measure up to 5 inches in diameter, while French varieties’ flowers generally don’t grow more than 2 inches wide. Those single or double blooms resemble a wide variety of other flowers, including anemones, carnations, and mums. Marigold colors naturally run to yellows and oranges, though whites have been added for the African cultivars and maroons and browns for the French varieties.

Marigolds can grow from 6 inches to 6 feet tall, and ferny marigold leaves have a pest-repellent scent that some gardeners consider pleasantly spicy, and others just find stinky. That odor isn’t obvious unless the foliage is crushed, and it does some good by potentially deterring insects, deer, and rabbits from entering your garden.

Most marigolds are grown as annuals, though some may be perennial in USDA Zones 8 or 9 through 11. Their common names can be misleading since most originated in Mexico and Central America rather than overseas in France or Africa.

RELATED: 8 Planting Mistakes That Can Ruin Your Garden Before it Even Gets Going

If you start marigolds indoors, be sure to accustom them to outdoor conditions gradually before you set them out in your garden.

When is the best time to plant marigolds?

After the last frost date in spring, you can either transplant or plant marigolds. Because taller African cultivars take longer to mature—70 to 90 days compared with the French varieties’ 60 days—you may want to start the former indoors and the latter outdoors.

Where can marigolds grow?

One reason marigold care is easy is that you can place marigold plants in nearly any spot with full sun and well-draining soil and they’ll survive with or without you. Marigolds can even tolerate shade for about a fifth of the day. They prefer soil with a pH that falls between 6 and 7.5. Avoid shady or soggy garden beds, and be careful not to overcrowd the plants; cold, wet conditions and lack of air movement all can contribute to fungus diseases and rotting blooms.

How do you plant marigolds?

Whether you are easing marigold seedlings from containers or transplanting those that came up too thickly in your garden, water them first. Then, follow these tips for planting marigolds.

Can you grow marigolds in containers?

Yes, smaller marigold plants such as the French or signet type thrive in pots and window boxes, where they may bloom for most of the summer and early autumn. The taller ones will be more challenging, but one African cultivar could serve as the thriller at the center of a large pot surrounded by smaller filler and trailing spiller plants. Marigold containers should have drainage holes and fast-draining potting soil, since the plants won’t tolerate soggy soil.

RELATED: The Dos and Don’ts of Watering Plants

Marigolds need an average amount of water, the same 1 inch per week often recommended for vegetables. If your climate is dry, you may need to water the plants more, but avoid soaking their leaves when you do so. For larger African cultivars, saturated foliage can become heavy enough to break off. Overwatering and overly damp conditions—especially when accompanied by cool weather—also may bring on fungal diseases in marigolds.

Marigolds in containers will usually dry out faster and require more irrigation than those planted in the ground, requiring watering as often as once per day.

When feeding marigold flowers, keep in mind that high nitrogen levels might produce too much foliage at the expense of flowers. Therefore, it’s best to fertilize in-ground marigolds only once, working the fertilizer into the ground before you plant them.

Because nutrients leach quickly from containers, you’ll want to feed the plants in them more often with a water-soluble plant fertilizer, following the directions on its label. In either case, use a bloom-booster type of fertilizer or plant food, which is highest in its middle number (phosphorus)—rather than nitrogen—to encourage heavy flowering.

Pinch marigolds back when they are young to force them to branch out. You can do this by removing the tip and the first two leaves beneath it from each shoot.

Also pinch or deadhead withered flowers at least once per week to keep your marigolds flowering all summer. You want to prevent them from making seeds for as long as possible, since—as with other annuals—they often deteriorate and quit blooming after they have gone to seed.

Either sow marigold seeds indoors in seed starting mix about 4 to 6 weeks before your last frost date or directly into the ground outdoors after that date has passed and your soil has warmed to at least 65 degrees Fahrenheit. Cover them with ¼ inch of seed starting mix or soil and keep them at 70 to 75 degrees until they sprout—usually in 4 to 7 days. When planting marigold seeds, avoid any that have been saved from hybrids since those won’t come true (meaning they won’t be identical to the parent plants).

RELATED: 20 Outdoor Plants You Can Propagate From Cuttings

The ASPCA lists marigolds as nontoxic to dogs and cats. Since some marigold types can be used as edible herbs or greens, they are apparently nontoxic to humans as well. However, the North Carolina State Extension warns that marigolds can be harmful if eaten in large amounts. Also, the plant’s sap reportedly irritates sensitive skin. Gardeners with sensitive skin should wear gloves when pinching or pruning the plants and avoid the consumption of this edible flower, as well.

Marigolds reportedly have some allelopathic properties, which means they might poison the ground around them enough to suppress the growth of other plants, such as beans.

Although they may repel some pests, marigolds remain attractive to slugs, which will chew holes in their foliage at night. To rid yourself of those, purchase a slug bait made from iron phosphate, and scatter its pellets around your plants at the rate of about 1 teaspoon per square yard.

Long spells of cool, wet weather might give your marigolds a case of botrytis, which causes gray mold on the plants’ rotting blooms. Remove the affected flowers and spray the plants with a fungicide, applying it in the morning so that the marigolds dry off before nightfall.

Although marigold seedlings can tolerate indoor conditions for a while, mature plants seldom do well as houseplants, so you’ll need to let them go at the end of the growing season when frosty weather sets in. If you remember to save seeds from the best of your open-pollinated types, you can try sowing their progeny the following spring. The hardiest species, Tagetes lemmonii, blooms best during the short days of winter and reportedly rebounds well from any frost it receives in the warm zones in which it grows, so it shouldn’t require protection in those climates.

Looking for more sun-loving plants? Check out our guides on growing dahlias, geraniums, and hibiscus.

TAGS:
HOW TO
GARDENING
LANDSCAPING
More From Bob Vila

3 Reasons You Should Always Plant Marigolds in Your Garden
Advertisement

12 Snake-Repellent Plants That Can Help Pest-Proof Your Garden

How to Grow Hibiscus

10 Sustainable Gardening Trends to Try in 2022

Have a Green Thumb? These Side Hustles Could Make You Big Money

23 Annual Flowers That Add a Pop of Personality to Any Home Lands...