How to Grow Watermelon for the Perfect Summer Treat

If succulent watermelon makes your mouth water, try growing your own for even fresher flavor. 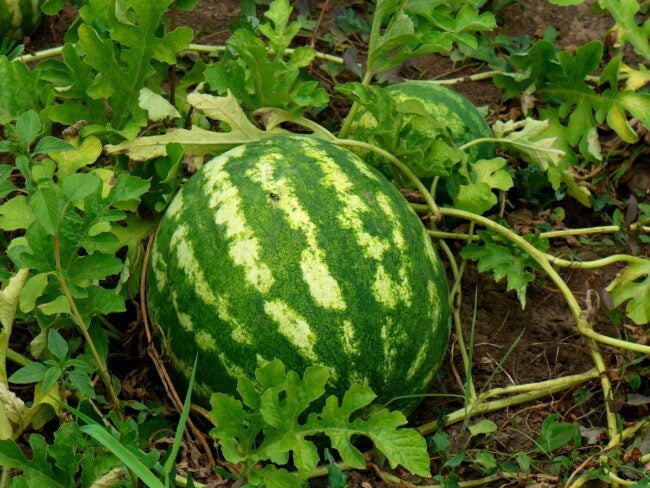 Growing a watermelon plant can be challenging since it requires plenty of space and heat in which to spread out and bask, in addition to its lengthy growing season. If yours doesn’t extend to the required 80 to 100 days, you can still grow the fruit if you start watermelon plants indoors and heat its soil quickly with black plastic mulch.

When reading up on how to grow watermelon, keep in mind that the cultivars vary from picnic types with 15- to 50-pound fruits to icebox varieties running from 3 to 15 pounds. Not surprisingly, the smaller watermelons are easier for northern gardeners to raise.

Growing Watermelon at a Glance

Considered a tender annual because it won’t survive frost, the watermelon vine can grow to 20 feet in length for larger cultivars, with lobed leaves, curly tendrils, and pale yellow blossoms—some male and some female. After pollination, the females produce oblong green fruits with darker or lighter markings that vary in size at maturity from 3 to 50 pounds—or more. Although watermelon flesh usually is red, it also can be pink, yellow, or orange.

Where are watermelons from? Although scientists once believed that they derived from a Kalahari bitter melon, recent genetic research reveals that they probably are the descendants of a sweeter, white-fleshed Sudanese species called the Kordofan melon instead. At any rate, watermelons did originate in Africa thousands of years ago and was eventually transformed into a more colorful fruit through selective breeding.

Most sources recommend that you plant watermelon in soil warmed by black plastic mulch. Cut a hole large enough for the seedlings and leave the mulch around the plant to warm the soil, conserve moisture, and suppress weeds. You can use organic mulch instead if you don’t apply it until after the soil temperature has risen to 75 degrees Fahrenheit.

When is the best time to plant watermelon?

Sow watermelon seeds outdoors—or set out purchased transplants—2 weeks after your last frost, when the soil temperature is at least 68 degrees Fahrenheit. Alternatively, start seeds indoors 2 to 4 weeks before you intend to set the seedlings out. Keep in mind that watermelon seeds usually sprout within 3 to 5 days if sown under very warm (90-degree) conditions but can take up to 10 days to germinate at 70 degrees.

Where can watermelon grow?

Choose a plot in full sun with well-draining soil and a pH between 6 and 7.5. If necessary, you can improve drainage by planting your hills (groups of seeds) on literal hills 3 feet across and at least 8 inches higher than the soil surrounding them. Space these mounds 4 to 8 feet apart from each other and near other compatible plants. Cover them with row cover for a couple weeks to protect the young plants.

How do you plant watermelon?

After the soil has been given time to heat up under the plastic, cut planting holes in it and follow these steps:

Can you grow watermelon in containers?

Due to their size, watermelons are challenging to grow in containers. For the best results, choose a very large “pot,” such as half of a wine or whiskey barrel with a sturdy trellis affixed to it. After filling the halved barrel with potting mix, plant a couple bush watermelon plants—such as Cal Sweet Bush—inside. You will need to train their vines up the trellis and provide “hammocks” of some sort to support the fruits.

As with many other container vegetables, you’ll want to mix slow-release fertilizer into the soil before setting out your plants and apply liquid fertilizer from mid to late summer as needed. Be careful that you never allow the soil to dry out completely.

Your watermelon plants will require the equivalent of 1 inch of rainfall a week, whether through actual rainfall or irrigation. For the latter, drip irrigation from a soaker hose or similar system works best, since it avoids the wet foliage that can contribute to fungal diseases.

If you are growing your plants in plastic mulch and hand watering them, you will need to aim the spout of your watering can at the hole in the plastic beneath each one. Doing so ensures the water goes into the soil and down toward the roots rather than splashing off of the plastic.

If you have access to composted manure, you may want to put a shovelful of it at the bottom of each hill you construct before sowing your watermelons and add several more shovelfuls of such compost along the sides later. Alternatively, dig fertilizer into the top 6 inches of soil before you plant your watermelons, using 3 pounds of a synthetic 10-10-10 type per every 100 square feet, or 4 pounds of an organic 4-3-4 type for the same amount of space.

Watermelon vines don’t require pruning except for the removal of fruits afflicted with blossom end rot or other maladies—such as inadequate pollination—which can cause fruits to become disfigured. If you want to produce the largest watermelons possible, prune out enough developing ones to leave only two or three of the best fruits on each vine.

Toward the end of the season, you might want to cut the vines back to stop new growth. That way, all of the plants’ energy goes into maturing existing fruits rather than making new ones, which won’t have time to grow large.

Watermelons are propagated from seed, which should be sown about 1 inch deep either in garden soil or in seed starting mix for plants started indoors. Those seeds generally sprout within 3 to 10 days, depending on the temperature, which should be between 60 and 95 degrees Fahrenheit. Young plants will require bright light to keep from becoming spindly, so—if started indoors—they should be placed in a greenhouse or under the center of a grow light.

Although watermelon plant leaves are not toxic, the fruits can become contaminated with bacteria such as E. coli or salmonella. Therefore, after bringing a melon in from the garden, thoroughly wash your hands with soap and water.

Next, rinse the watermelon thoroughly under running water, scouring it with a clean produce brush before cutting it open. Also, avoid eating any melon on which the rind cracked while it still was in the garden, since its flesh could be harboring bacteria.

To prevent blossom end rot, which is caused by a calcium deficiency and is indicated by sunken dark spots on the ends of the melons opposite the stems, mulch your plants to keep their soil evenly moist. Either drought or soggy conditions can limit their uptake of calcium.

You can help protect your seedlings from disease-spreading cucumber beetles by placing a floating row cover over those young plants until they mature enough to bloom. At that point, you will need to remove the cover so that the blossoms can be pollinated by more beneficial insects.

When considering when to harvest watermelon, test your watermelons to be sure that they are ripe.

When is the best time to harvest watermelon?

As a watermelon nears maturity, the curly tendril opposite its stem should turn brown and its rind appear matte rather than glossy. At that time, check the fruit as you would a melon in a supermarket, by rapping it on the side to see whether it sounds hollow. A garden-grown melon also usually has a white spot on its underside which will yellow when it’s ripe.

How do you harvest watermelon?

When harvesting a melon, avoid yanking it off the vine. Follow these steps instead:

How do you store watermelons?

If a watermelon hasn’t been cut, you can keep it at room temperature for a week or so, or at 50 to 60 degrees Fahrenheit for up to 3 weeks. After it has been partially sliced, cover the cut surface of the remaining section of melon with plastic wrap and store it in a refrigerator for up to 4 days.

Looking for more fruit and vegetable articles? Check out our guides on growing berries, tomatoes, and cucumbers.

The Best Fertilizer for Watermelon Plants of 2022

10 Variegated Houseplants That Pack the Most Visual Interest