First and Last Frost Dates: What All Home Gardeners Should Know 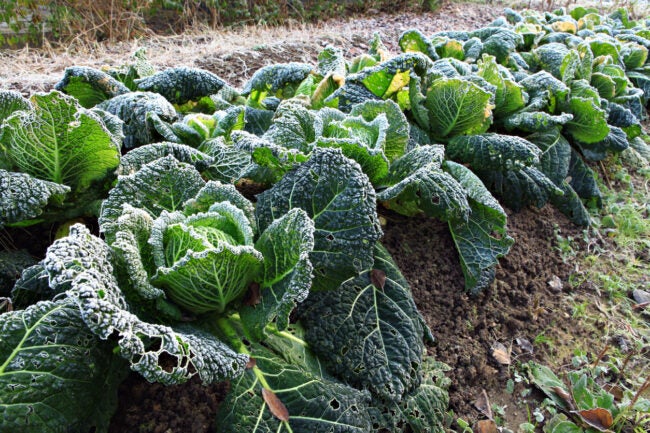 We know intuitively that climate affects gardening. Palm trees that thrive in Florida won’t survive in a suburban Chicago landscape because the winters are too cold. Many garden decisions, however, are not so clear-cut. Tomatoes grow well in both Florida and Illinois gardens, but not at the same time of year. The difference is the growing season itself, which is defined by the last and first frost dates.

What are frost dates?

Frost days happen during the cold season between fall and spring, when chilly conditions are often favorable for frost to form. In most of North America, this happens between October and March. Some areas have much shorter (or even nonexistent) frost seasons, and other areas could see frost any month of the year.

Know how to use frost dates for gardening.

Use your first frost date to plan a seed starting and outdoor planting schedule. Seed packets often have instructions such as, “Sow in seed trays indoors two weeks before your last frost date,” or, “Plant after all danger of frost has passed.” For the other end of the season, compare the number of days needed for a plant to grow to maturity to the number of days left until the first fall frost date. Using this climate information to guide planting activities in spring and fall minimizes the likelihood of cold weather damage and helps determine whether your season is long enough to grow a particular plant, like melons, for example.

Plan by the average dates, but keep an eye on the actual weather. As helpful as the average frost date information is for planning, the weather in a given year will vary significantly from the averages. The National Weather Service (NWS) issues several advisory types that gardeners should heed during the critical early and late portions of the growing season.

Freeze warnings are issued during the growing season when significant, widespread temperatures of 32 degrees Fahrenheit or lower are expected. A freeze warning may be issued at the start of the growing season, when it is late enough to damage new plants, or late in the season until the first widespread freezing weather occurs. You might need to add extra plant protection to keep tender plants alive during a freeze.

When the NWS warns of a hard freeze, it means that sustained temperatures below 28 degrees Fahrenheit are anticipated for at least an hour or so. These colder conditions kill most summer crops, even when you add protection, although many well-established cool weather crops are significantly more tolerant.

How to protect plants from frost.

Frost is formed either by deposition—when the dew point is below 32 degrees Fahrenheit and water vapor in the air changes from gas directly into ice crystals—or by freezing. When the dew point is above 32 degrees, water vapor in the air first condenses as dew before the surface temperature drops below 32 degrees, and the dew freezes to make frost. Frost formation requires air or surface temperatures below freezing.

Frost can form when official air temperature readings are above freezing. On cold, calm, clear nights, temperature often differs several degrees between grass-blade height and the approximately 5-feet aboveground spot where surface readings are taken. For instance, the grass surface may be 31 degrees, while the official reading could be 39. Also, radiational cooling lowers surface temperatures relative to the surrounding air temperature. For this reason, it is important to be proactive about frost protection whenever a frost advisory is in effect.

Even when you plant according to average frost dates, sometimes an unseasonable frost advisory late in spring or early in fall can threaten your garden. Frost formation causes ice crystals to form inside leaf tissue, causing irreparable damage. The most susceptible plants are tropicals and hardy plants with young leaves or tender new growth. Following are the best ways to prevent frost damage.

RELATED: 25 Ways to Enjoy Your Garden This Winter

Mulch insulates plant roots from temperature swings. For frost protection, mulch early in the afternoon while the soil surface is warm.

Water late in the day.

A boost of moisture hydrates a plant and increases the humidity in the immediate vicinity. The added water vapor creates a microclimate that resists temperature changes, helping to keep plant leaves above the critical freezing point.

Move potted plants indoors or to a sheltered location.

The easiest way to protect potted plants is to bring them indoors. An alternative is to cluster potted plants tightly in a sheltered location, and water them.

Add a breathable cover, such as a felt frost blanket or even a bedsheet. Use supports to elevate the cover above plant foliage. Even though frost will form on the surface of the fabric, it will still raise the temperature and protect plants beneath.

Place a fan on its lowest setting so that it provides a steady, gentle breeze across sensitive plants. Moving air has a drying effect that minimizes frost formation.

14 Ways to Help Your Garden Survive a Heat Wave

Frost Coming Your Way? What to Do With Veggies in the Garden
Advertisement

Closing Down Your Summer Garden: 5 Tips to Make the Most of This ...

4 Things to Know About Gardening Late in the Season

5 Things to Know About Succession Planting