When to Plant Tulip Bulbs for Successful Spring Blooms 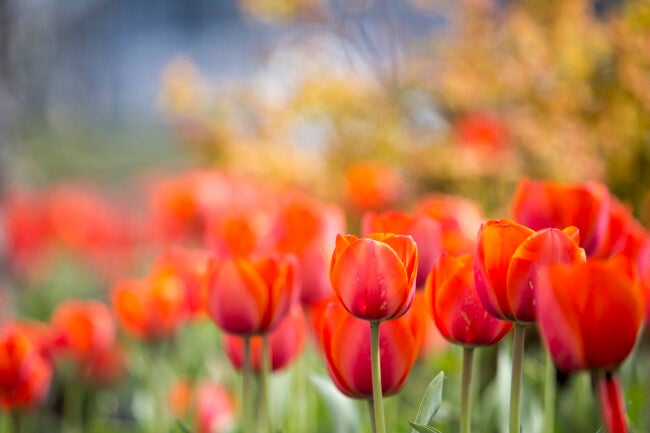 Q: I love how tulips look in gardens, but don’t know when to plant them or how long they take to grow. I’d appreciate any and all advice you have about when to plant tulip bulbs. Thanks!

A: The correct answer on when to plant tulip bulbs depends on your USDA zone, though in most areas, set out tulips in autumn or early winter. Keep in mind that, if you plant them at the proper time, no growth will emerge from those bulbs until late winter or spring.

Depending on whether they are early, mid-season, or late tulips, they will bloom at some point between the time your crocuses flower and the time your peonies do the same—usually 4 to 5 weeks after their first shoots appear aboveground.

In most areas, plant tulips in mid- to late fall.

A good rule of thumb is to plant your tulips after your first light frost and about 6 weeks before the usual date of your first heavy freeze. At that time, your nighttime temperatures should be between 40 and 50 degrees and your soil temperature at some point between 55 and 60 degrees. Gardeners in USDA zones 1 through 3 should aim for September or October, those in zones 4 and 5 for late September to early November, and those in zones 6 and 7 for October to mid-December.

Because tulip bulbs typically require 2½ to 3½ months of temperatures below 50 degrees to set flowers, gardeners who live in USDA zones 8 through 10 should purchase those that have been prechilled. Alternatively, gardeners can chill their own bulbs for 10 to 14 weeks—in a refrigerator set to between 35 and 45 degrees—before planting them.

Make sure the soil has cooled down before planting in September.

Early September usually is too early to plant tulip bulbs in any zones except 1 through 3, since the weather might still be balmy at that time. And tulip bulbs often will refuse to put down roots in soil warmer than 60 degrees. So, wait until those nighttime temps steadily hover lower than 50 degrees.

Gardeners in USDA zones 8 through 10 might want to purchase tulip bulbs in mid-September to mid-October and refrigerate them until early January inside a perforated plastic bag. This can give the bulbs an adequate prechilling period before planting. For the best results, store them in a garage refrigerator stocked only with cold drinks rather than in a produce crisper with fruits and vegetables, since ethylene from produce can have a detrimental effect on flower embryos.

Depending on your USDA zone, you might plant in November or even December.

Longfield Gardens recommends putting off planting tulip bulbs until November where that is possible, since the bulbs have less of a tendency to develop fungal problems when the soil is cooler. Also, your local rodents may already have squirreled away plenty of food by that time and won’t be as interested in digging up your tulip bulbs to add to the stash.

Gardeners in USDA zones 8 through 10 definitely should wait until at least November to plant their prechilled tulip bulbs and may want to put off planting until as late as early January. When stored and chilled correctly, the bulbs often will bloom within 4 to 6 weeks of planting and the blooms will last longer under cool conditions.

If the ground isn’t frozen, you can plant through late January.

If the ground freezes before you get your bulbs set out or if you find—in winter—some bulbs you forgot to plant in autumn, don’t despair. Stash them in a cool, dry place, at a temperature between 50 and 70 degrees, and hope for a thaw. If that occurs, you can plant those bulbs up until the end of January, provided that they haven’t shriveled in the meantime. Keep in mind, though, that the bulbs have to put down roots before they send up foliage, so those planted late probably will bloom later than is normal for them.

Plant the bulbs snugly for their winter nap.

Now that you know when to plant tulip bulbs, in USDA zones lower than 7, choose a location for them in full sun with well-drained soil. Elsewhere, place them where they will receive morning sun and afternoon shade to keep their blooms fresh longer. Measure the height of the bulbs and plant them—with their pointed ends up—at three times that depth. That usually will be between 6 to 8 inches deep for most tulip bulbs. Space them 4 to 5 inches apart, arranging them in informal clusters rather than straight lines.

Because tulips aren’t reliably perennial, it’s usually best to plant new bulbs each year. However, if you want to try to bring some back for a second year of bloom, snip off their stems after the flowers fade, but leave the foliage in place until it withers on its own, feeding energy back into the bulbs.

12 Bulbs to Plant in the Spring for Showstopping Summer Blooms

Monochromatic Gardens: The Best Flowers To Plant, Whatever Your F...

3 Reasons You Should Always Plant Marigolds in Your Garden