The 20 Best Lilac Varieties to Grow in Your Yard

If it’s been a while since “lilacs last in the dooryard bloom’d” at your house, try some of these scent-illating types. 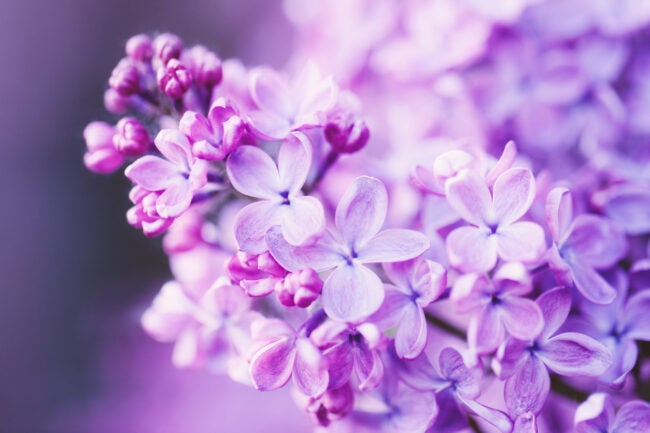 Among the most nostalgia-inducing flowers, lilac trees still grow near where many abandoned farmhouses once stood. That tough-as-nails disposition, which makes lilac bush care easy, as well as an unforgettable fragrance still keeps the blooms popular today.

Keep in mind that the showiest common lilac (Syringa vulgaris) species and hybrids usually thrive only where winters are cold, in USDA Zones 3 through 7. However, there are newer lilac varieties which can take the heat.

So, many can take cold or heat, but when do lilacs bloom? In most climates, hummingbird-attracting lilac flowers appear in mid to late spring, though everblooming types might continue to perform intermittently throughout the summer.

Related: 9 of the Best Shrubs for Any Garden

This is that previously mentioned “old farm lilac” from which most modern hybrids derived. It typically grows taller than they do, up to 16 feet or so, with single flowers whose color is—no surprise here—lilac. As with most of its single-flowered descendants, it produces panicles of highly fragrant, 4-petal florets at its branch ends. Vulgaris varieties usually take at least 2 years, sometimes up to 5 years, to bloom after they are planted.

The white-flowered version of the farm lilac, this one also grows tall—and wide due to a multiplicity of suckers. Keep in mind that, on grafted bushes, you should remove all suckers, as lilacs typically are grafted onto privet. However, you can leave the suckers in place on bushes growing on their own roots if you want those bushes to spread into a hedge or living fence.

Derived by Dutch breeder Garrit Maarse from an aberrant limb of the white ‘Marie Legraye’ variant, this lilac isn’t an intense yellow. In fact, the flowers reportedly start out cream and darken to pale yellow as they age. Still, a yellow lilac plant is unique and almost a contradiction in terms! This one tops out at 12 feet.

Also a sensation for its unusual coloring, this lilac produces panicles of purple blooms with a white picotee edging on each floret. It derived from a purple-flowered cultivar called ‘Hugo de Vries’, on which Dirk Eveleens Maarse of the Netherlands spotted one branch with laced lilacs. Reportedly a bit slow-growing, it probably won’t surpass 10 feet in height. However, that lighter edge gives it a distinct edge on the competition.

As is implied by its name, this dandy came from an American breeder, Father John Fiala, who founded the International Lilac Society and produced a large number of his own hybrids. This is one of the darkest purple color of lilac flowers, with just a few flecks of white at the centers of the florets. It grows to 8 feet high.

Introduced by another American breeder, John Dunbar, a horticulturist at Rochester’s Highland Park, this lilac was named for President Abraham Lincoln—perhaps in response to Walt Whitman’s elegy “When Lilacs Last in the Dooryard Bloom’d.” Its flowers appropriately put it among the bluest of the cultivars and it grows to more than 12 feet.

Related: These Trees and Shrubs Thrive in Containers

Speaking of presidents, this introduction from famed French lilac breeder Victor Lemoine was named for a 19th century president of France and co-prince of Andorra, Jules Grevy. It grows to a stately 12 feet, producing mauve buds followed by double bluish-lavender blooms impressive enough to cause viewers to do a double take.

Also from Lemoine, and probably named for one of his relatives, this lilac offers double white blooms. Keep in mind that there is an earlier lilac called ‘Madame Lemoine’ for the wife who helped him with his hybridizing, also with double white flowers. Don’t worry if you get the two confused, since either can produce resplendently bridal blooms on bushes 10 to 12 feet tall.

Another Lemoine French hybrid, this one was named for a Nancy Parks horticulturist. As with most of Lemoine’s cultivars, it produces double flowers, this time on an 8- to 10-foot bush. Those blooms are an interesting reddish pink described as either magenta or fuchsia, so Paul shouldn’t pall on you!

This lilac was named by Lemoine for Victor Charles Joly, a French physician and—probably more important to Lemoine—a writer on horticulture and vice president of the Central Horticultural Society of France. Like Paul, Charles, too, “wears” double magenta blooms on a bush that can reach 12 feet in height.

Unusual for Lemoine in that it has single flowers, this lilac was named for Gaspard Monge, Count de Peluse, a French mathematician and physicist. It still “adds up” to a highly impressive cultivar that can be “counted on” to grow to 12 feet and produce dark reddish purple blooms on panicles 9 inches long.

One of the most resplendent white varieties, growing to 12 feet and offering double white blooms that contrast with the pink buds, this Russian hybrid is attributed to Leonid Kolesnikov. His Moscow beauty blushes a bit at such praise, often showing a faint tinge of pink on “her” white flowers.

Speaking of Russian beauties, nada is prettier than Nadezhda—also from Kolesnikov—and its name means ‘hope.” It is somewhat similar in appearance to Lemoine’s President Grevy, with reddish-lavender buds followed by large panicles of double bluish-lavender flowers to help you double down on the hope that summer is really on the way.

Related: The Dos and Don’ts of Pruning a Bush

Although most lilacs are late spring bloomers, Declaration declares itself early and loudly with single reddish-purple blooms in panicles up to 15 inches long, about twice the size of other types. It reportedly begins to flower at least a week earlier than those other types on a bush that can grow to 8 feet.

Although lilacs have prettily heart-shaped foliage, they mostly just fade into the landscape after they bloom. This Japanese lilac tree introduced by J. C. Bakker and Sons of Canada is an exception to the rule. Its green foliage variegated with yellow will remain bright even after the white blooms fade. Take the “tree” in its description seriously, though, as it can grow to 30 feet high in USDA Zones 5 through 9.

This lilac definitely will be an angel for gardeners in warmer climates, since it is one of the few varieties that reportedly doesn’t require winter chilling to bloom. Bred by Walter Lammerts for Rancho del Descanso in California, it grows to 10 feet and produces its pristine and early white flowers in heat up to USDA Zone 9.

Those of you who prefer that your “no-chill” lilac be more of a lilac color might want to try one of Lammerts’ earlier Descanso hybrids. With lavender-hued blooms, this lady can grow to 15 feet tall, extend the lilac zones to at least USDA zone 8, and even endure some drought.

Popular for “her” petite size, Miss Kim seldom grows taller than 9 feet in USDA zones 3 through 8. In late spring or early summer she wears purple buds, which open into pale blue or lilac purple blooms smaller than those of vulgaris varieties but also quite fragrant. And, unlike the vulgaris varieties, this somewhat heat-tolerant one introduced by Meader & Yeager offers autumn color with burgundy foliage, which “wines” before it falls.

Another “little lady,” this everblooming lilac introduced by Georges Morel of France’s Minier Nursery seldom grows taller than 6 feet and features magenta buds followed by panicles of small pink fragrant flowers. Those blooms appear most profusely in late spring with the other lilacs but can pop up off and on again throughout the summer in cooler climates. In warmer ones, the bush might repeat its bloom only in autumn.

A series of lilacs produced by Tim Wood of Spring Meadow Nursery, Bloomerang now is available in Dwarf Pink, Dwarf Purple, Dark Purple, Purple, and Pink Perfume. Growing to 5 feet—3 feet for the dwarf varieties—these cultivars bloom in spring as most lilacs do, but after a rest in June, they will continue to flower with smaller, darker panicles throughout the rest of the summer.

14 Best Plants for Under Trees