The Dos and Don’ts of Pruning a Bush

Snip your front yard's shrubs into shape with our easy-to-follow pruning tips. 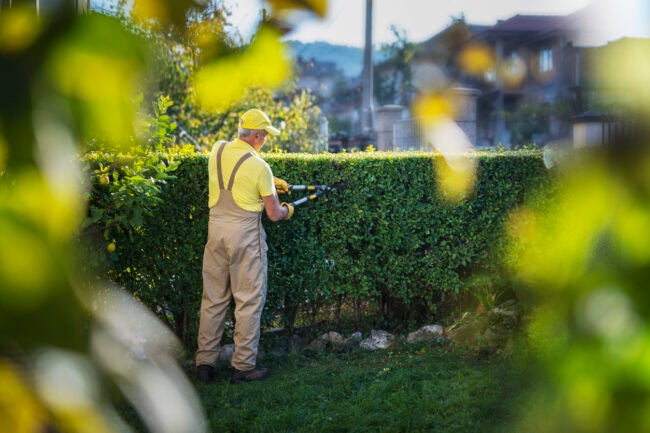 Shrubs play a vital role in the landscape, serving as decorative borders, living fences, and foundation plantings that add distinction and personality to a property. But if your private hedge is suddenly sprawling all over your sidewalk, it may be time to get out the pruning shears.

Whether you’re just trying to control the rapid growth of the hedges under your windows, or you want to increase the number of blooms on your snowball bush, correct pruning is the key. Whether you’re a seasoned gardener hoping to learn how to trim overgrown bushes without damaging them or are brand new to shrub pruning and wondering what is pruning, anyway?, this article is for you.

Before you start clipping away, prepare yourself with this list of common dos and don’ts when pruning a bush.

The Dos and Don’ts of Shrub Trimming

Trimming shrubs and small trees will keep them healthy while helping them look their best. In some cases, pruning a bush will even encourage abundant blooms on flowering species. Using high-quality tools and following the correct pruning techniques will make the project go more quickly and produce better results. Keep reading to find out how to trim bushes, hedges, trees, and shrubs to boost curb appeal.

DO use the correct tools for shearing hedges.

Using the correct pruning tools for the type and size of branch is vital, not only for your safety but also for the health of the tree or shrub. In general, pruning tools that make crisp, clean cuts on greenwood are preferable, while those that employ a crushing action work best on dry limbs. Choose the tool for shearing hedges or shrubs based on the type of pruning that’s necessary.

In addition to choosing the type of pruning tool based on the size of the branch, also consider the branch type. Pruning shears and loppers feature two basic types of cutting mechanisms for cutting either greenwood or dry wood branches.

Most gardeners prune away dead branches to ensure the health of the tree or shrub, as dead or damaged branches can draw energy away from the healthy ones. However, there’s another reason to trim off dead branches, and that’s to keep them from becoming dangerous airborne projectiles during high-wind events, such as hurricanes or tornadoes.

Dead branches are easier to dislodge from the rest of the tree than are healthy branches, and they’re also more likely to fall and damage a roof or fence. Plus, overgrown shrubs can block pedestrians’ and drivers’ views if planted near sidewalks or streets. If you have a dead bush, make sure to inspect it for disease and throw it in the compost pile to prevent the spread of pest or disease to your healthy shrubs.

DO use the correct technique for cutting hedges down to size.

Depending on the type of shrub or tree being pruned, two different kinds of cuts are typically called for: heading cuts or thinning cuts. Here’s how to choose the correct one.

DON’T give up on lopsided, dying, or tangled shrubs.

As long as you don’t have a dead bush, pruning away broken, dead, or tangled branches may be all that’s necessary for bolstering the health of a tree or shrub and encouraging new growth. This is especially true of native shrubs. But, even lopsided trees and shrubs can be pruned in a way to help them develop a more attractive growth pattern. Try the following:

RELATED: 14 Plants That Can Help You Sell Your House

DO prune shrubs when planting.

Get your shrub off to a good start. Immediately remove any dead branches by cutting them as close to the shrub’s main stem as possible. This also is the time to inspect the root ball and remove broken roots, which can spread disease to the rest of the shrub.

When first planting or transplanting a shrub, cut off any large roots (thicker than your little finger) that have grown in a circle around the root ball, as these “girdling” roots will never straighten out and could eventually kill the shrub.

RELATED: How to Plant a Bush or Shrub

DON’T forget to maintain your tools.

Cutting hedges with dull blades can damage branches, creating tears that lead to disease. Sharpen your pruning shears to ensure the smoothest cuts, and keep them clean to avoid transmitting infection from a diseased shrub to a healthy one.

Sterilize pruning tools before every bush trimming session and between uses on individual shrubs by wiping them down with rubbing alcohol, household disinfectant, or a 10-percent solution of household bleach and water.

RELATED: How to Care for Garden Tools

DO prune flowering shrubs at the right time of year.

Spring-flowering shrubs, such as lilac and forsythia, develop buds in late summer and early fall that will display the following year. If you prune them during fall or winter, you will cut off these potential blooms, resulting in little to no flowering the following spring.

The best time to trim bushes like spring-flowering shrubs is during their growing season, when you can easily identify blooms and prune around them. If you need to maintain size or remove dead wood, prune immediately after buds bloom to avoid snipping off next year’s blossoms.

Summer-flowering shrubs, such as roses and crape myrtle, develop buds in late spring and early summer, and should be pruned during dormancy in late winter or early spring to stimulate flower production.

No matter what type of shrub you have, fall pruning can stimulate late-season growth that may not have enough time to harden. This can weaken and damage the plant—especially if there’s an early frost. Instead, wait until winter and trim bushes when the plant is in deep dormancy.

DO maintain throughout the year.

Unlike seasonal pruning, maintenance pruning is an ongoing process. This includes removing diseased or broken branches and snipping away any fast-growing sprouts during the growing season. Limit maintenance pruning to fixing immediate problems, and never cut away more than is needed.

RELATED: How to Sharpen Loppers—and Why You Should

DON’T let shrubs get too dense.

Shrubs that get abundant light and air circulation are healthier than shrubs with compact centers. To thin a dense shrub, prune up to one-third of its side branches where they connect to the main stem. If it’s a multi-stem shrub, prune out the branches at ground level. By opening up the center of the shrub, you’ll ensure that it receives adequate air and light.

DO consider the natural shape of the shrub.

The simplest shape to maintain is the one that is most natural to your shrub. This factor is just as important during the shrub-buying stage as it is to the pruning process. By knowing what your shrub should look like as an established specimen, you’ll know where it will fit best in your landscape and how to prune it to maximize its display potential.

DON’T shear off the top to control vertical growth.

Cutting off the top of a shrub is a radical step, and it doesn’t work. By shearing off the top to obtain a cube look, you’ll stimulate leggy vertical growth, which leads to that unsightly “witches’ broom” effect. Unless you’re in the topiary business, you’re probably better off individually cutting back too-tall branches.

Keep in mind that whichever way a bud faces determines the direction of the new growth. The guiding principle here is to prune at a spot that’s just above an outward-facing branch bud. It takes a bit more time, but you’ll be happier with the results.

DO prune to rejuvenate a declining shrub.

Give that ancient woody spirea a new lease on life by pruning out the older wood to stimulate new growth. The new branch sprouts will produce more blossoms, so you’ll be able to keep an older shrub looking young for years.

When removing side branches, cut within ¼ inch of the main stem. Anything longer is susceptible to disease or infestation by insects. Pruning flush with the main stem at a branch’s point of origin gives the shrub its best chance of healing from the wound.

Pruning is essential for keeping trees and shrubs healthy and looking good, and in many cases, pruning a bush is a DIY-able project that a homeowner can perform with just a few good pruning tools.

Trimming away large branches on trees or tall privacy plantings, however, poses a safety risk and most DIYers don’t have the equipment to remove high branches easily. If the pruning task calls for using a power saw while on a ladder, it’s probably best to call a landscaping or tree trimming company rather than attempt to DIY the task.

Pruning to maintain the growth pattern and health of trees and shrubs is an ongoing process and should be done once or twice a year, or as needed. Before pruning a specific species of tree or shrub, it’s a good idea to research the plant in question because different species do better with different types and times of pruning.

In addition, most home gardeners and landscapers will likely have some general questions about the pruning process. Here are some of the most common FAQs around how to trim bushes:

Q. Can you kill a bush by trimming it?

If you’re learning how to trim hedges, it’s surprisingly easy to do more damage than good when you start trimming. This depends on the species though—so do your research. In general, don’t prune away more than ⅓ of a bush’s growth during its active growing season. Cutting back more than that can shock the specimen and kill it.

Q. What is the difference between pruning and cutting back?

“Cutting back” is a type of pruning to reduce the size of some or all of the branches. “Pruning,” however, encompasses other types of cutting, such as removing damaged limbs, correcting the growth of a lopsided tree, or increasing air circulation.

Q. Where do you cut when pruning?

For the health of the tree or shrub, the best place to cut is typically just outside a growth node or bud. Make an angled cut just above an outward-facing bud to trim a branch or close (within ¼ inch) to the main stem if removing an entire branch.

Q. Do branches grow back after pruning?

A branch that’s been removed will not regrow, but other branches may grow from off-shoots and buds in the same area.

Q. When is the best time to trim bushes?

The best time to trim bushes and shrubs depends on when the plants flower. Most shrubs bloom in summer and benefit from late winter or early spring pruning. This is because they form flower buds on new growth, so as long as you trim them as they just begin to green up after winter, you can shape them without reducing their flower power.

Spring-flowering shrubs form buds on old (last year’s) growth, and you should trim them while they are flowering in spring or immediately after flowers fade. If you wait until the next spring, you remove the branches and their winter-formed flower buds.

The Dos and Don'ts of Foundation Planting

How to Grow Boxwood Shrubs

How to Grow a Butterfly Bush

The Dos and Don'ts of Planting Ground Cover

The Dos and Don'ts of Cleaning Patio Furniture