11 Types of Edible Berry Bushes You Should Plant This Spring

Beautiful landscapes are not merely feasts for the eyes; these attractive berry bushes add taste to your lawn and your meals. 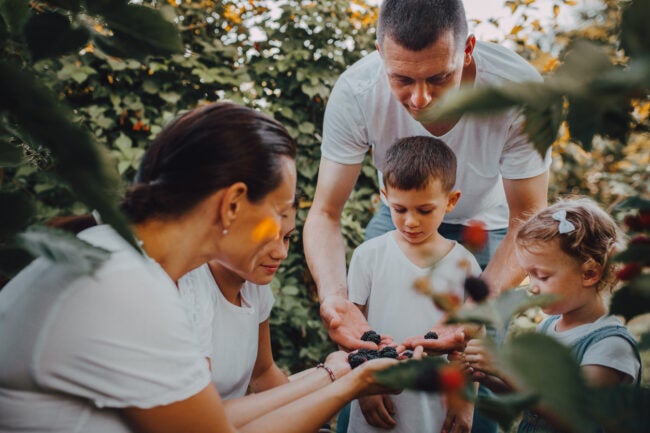 All too often, we think of landscaping in purely decorative terms. At most, we may consider what will sustain the birds over the winter. However, “foodscaping” offers a practical application for your landscape without sacrificing the ornamental aspect. As more people strive to add sustainability to their lives, they may want to consider introducing color and texture to their yards by adding some edible berry bushes or berry trees.

Several kinds of berries attract pollinators—another important aspect of sustainability that also adds an element of entertainment to the casual garden observer. There are many types of delicious berries, and these are some berry bushes one can plant in their own yard.

RELATED: How To: Plant a Bush or Shrub

The boysenberry looks and tastes a lot like a cross between a blackberry and a raspberry. For those who have never tried one, it’s probably because they are too fragile to transport easily. This makes them a good candidate for backyard berry growing. The shrubs prefer full sun (with some shade during hot summers) and rich soil in zones 5 through 9. As a member of the rose family, the boysenberry bush may have thorns, so care should be taken when pruning one. But it’s worth it when sampling their berries, which are so rich in anthocyanins (which are linked to improved eye health and other anti-inflammatory benefits) that they’re considered a superfood.

A significant source of antioxidants, flavonoids (which help preserve memory), and vitamin C, blueberries are popular in muffins, pancakes, pies, smoothies, and more. These fruit bushes grow best in northern climes, enjoying well-draining, highly acidic soil in sunny locations with some protection from strong winds. There are several cultivars available, most of which have a moderate to slow growth rate, meaning it could be as long as 6 years before harvest. Although they are self-pollinators, blueberry bushes fare better when planted in multiples.

Native to many parts of the U.S. and southern Canada, elderberry can grow in USDA hardiness zones 2 through 11, preferring moist soil and open areas. Black and blue varieties appeal to wildlife and people, although the CDC (Centers for Disease Control and Prevention) advises humans to consume only cooked berries or fermented berry juice. Packed with vitamins and antioxidants, elderberries can boost the immune system and provide other medicinal benefits. In the garden, plant a single elderberry or several to form a hedge. Either way, the shrub will attract butterflies.

Lingonberries are berry shrubs grown in full sun or partial shade in zones 3 through 8. A close relative of both the cranberry and the blueberry, lingonberries are small shrubs reaching 18 inches high and wide. They require rich soil (but little fertilizer) and don’t like competition in the garden. Even under the best conditions, they’re slow to mature, often taking up to 7 years. The pretty red berries they produce are smaller, softer, and juicier than cranberries, but equally sour, so growers rarely eat them raw. Lingonberries make good jams and sauces and are traditionally used in Swedish cooking.

Originating from Asia, the goji berry, or wolfberry, has become popular worldwide for its health benefits, such as boosting the immune system, regulating glucose, and providing some anti-aging properties. These antioxidant-laden berries might even help slow the spread of cancer. However, anyone taking blood thinners should avoid goji berries. Thriving in sun or partial shade in zones 5 through 9, these self-pollinating vine-like shrubs do best when grown against a trellis. Their bright red fruits are sweet and will continue to produce until frost.

Blackberries are a tasty source of antioxidants, vitamins, and other nutrients. Commonly referred to as caneberries, they are perennial berry plants that produce fruit from the previous year’s canes. While relatively easy to grow in zones 5 through 10—given plenty of sun and sandy loam that drains well—blackberry bushes come in semi-erect and trailing cultivars, each of which have varieties with and without thorns. Tolerant to both cold and heat, this rugged survivor’s tangy fruit can be eaten raw or cooked into jams, sauces, and a variety of dishes.

Sometimes called blue honeysuckle, honeyberry produces a fruit resembling an elongated blueberry, with a taste similar to an underripe blueberry or blackberry. Among the berry bunch, they produce the highest amount of anthocyanins. One reason for their surge in popularity is honeyberry’s fondness for cooler growing conditions, making them viable for zones 2 through 7. They’re not fussy about soil, as long as it drains well. The shrubs mature slowly, but they’re worth the wait.

A cross between the North American blackberry and the European raspberry, the loganberry resembles a reddish-purple blackberry and tastes like a combination of the two. More disease resistant than many berry shrubs, the loganberry produces long, trailing, undisciplined canes that die off after their second year. These self-propagating plants fruit earlier than blackberry bushes—generally from mid-summer to mid-autumn in zones 6 through 9.

The sun-loving miracle berry grows best in zones 9 through 11 in acidic soil with only partial sunlight and minimal watering. Because of this, the self-fruiting shrub makes an excellent container plant. A tropical native to West Africa, the miracle berry is so named for the effect its little red berries have on taste buds; it’s so sweet, it makes all foods consumed after it taste sweet, too. This can be a benefit for people undergoing chemotherapy or diabetes treatment or taking appetite-suppressing medication.

This small shrub, native to North America, has a vase-like shape that spreads to form a thicket. It’s perfect for providing a desirable shelter for birds, who like to nibble on its fruit through the winter. White flowers in May give way to very tart dark-purple fruit. Full of antioxidants, chokeberry is typically consumed in jams, jellies, baked goods, tea, and wine. The contrast of its golden-orange autumn leaves against the almost-black fruit makes an attractive garden addition.

RELATED: 9 of the Best Shrubs for Any Garden

A widespread favorite among garden berries, raspberries are another caneberry. Grow them in zones 3 through 9, being aware that cold, wet weather during flowering can produce gray mold. Avoid planting them near nightshade plants and other berries to prevent disease spread. Raspberries should start producing within 2 years. They grow best with ample sunlight and good drainage, but the canes don’t like to dry out.

Heavy feeders, raspberries will benefit from compost, mulch, and fertilizer. The canes will need pruning—and be on the lookout for suckers that spread by growing from the roots. These tasty berries contain potassium for cardiovascular health and blood pressure management, omega-3 fatty acids to help prevent stroke and heart disease, and manganese, which is necessary for healthy bones and skin.

12 Perennial Vegetables to Plant for Years of Fresh Produce

The Dos and Don’ts of Mulching the Garden

How to Grow Your Own Food

6 Types of Berries That Are Easy to Grow in Containers