The War on Leaf Blowers: Why Some Communities Are Up in Arms Over the Loud Lawn Tools

Gas-powered leaf blowers aren’t just loud—their emissions could be contributing to global warming. Here's why towns around the nation are restricting their use (or banning them altogether), and what you should do with yard leaves instead. 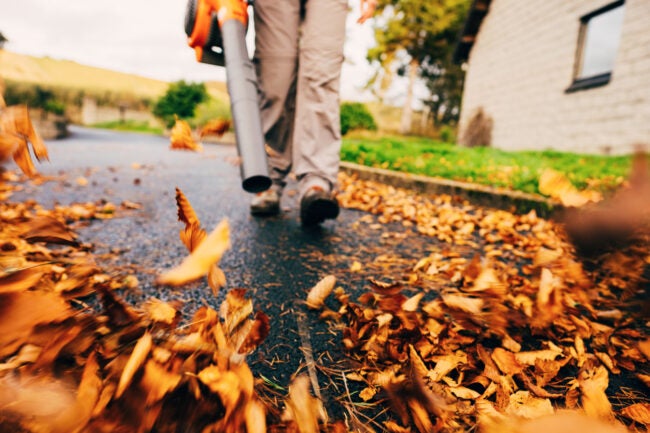 Leaf blowers have been around for decades. Today, there is the choice between battery-operated and gas-powered leaf blowers, but many landscaping companies and homeowners continue to use gas-powered versions to get the job done.

However, some people who have been affected by the noise and pollution have had enough. While a gas-powered blower’s two-stroke engine is efficient and reliable, the emissions and noise have led to communities around the nation restricting their use.

The Problems with Gas-Powered Leaf Blowers

Gas-powered leaf blowers have long been considered a nuisance of neighbors around the country. People complain about the noise, which can cause permanent hearing damage or other hearing issues such as tinnitus after just 2 hours of hearing a blower’s 65 to 80 decibels at 50 feet away. In densely settled communities, most people are usually much closer to leaf blowers than 50 feet.

“Noise is the problem that really drives our members crazy,” says Mike Christensen, spokesman for Quiet Clean NOVA, a grassroots citizens organization in Northern Virginia whose goal is to ban or restrict the use of gas-powered leaf blowers. “It’s what got most of them to become activists for the first time in their lives. But that’s partly because most people don’t have any idea how incredibly polluting the two-stroke engine leaf blowers are until they start researching the issue. Both problems are compelling.”

For those who live and work in the communities where gas-powered leaf blowing frequently happens, activists are trying to ban their existence, or at least limit their use, on account of their noise. But their impact on the environment isn’t exactly healthy, either.

“Gas-powered leaf blowers (GLBs) are amazingly polluting—much more polluting than most late-model cars. They burn a mixture of gasoline and oil. Because their two-stroke engines are so inefficient, more than 30 percent of that mixture is released unburnt as aerosol. These emissions contain an array of toxic pollutants, known carcinogens, and smog-forming chemicals,” says Christensen.

Almost 2.2 billion gallons of fuel are used on lawn care each year, which is the equivalent of powering millions of homes for a year. Gas-powered leaf blowers in particular have a negative effect on the environment because of their two-stroke engines. Research has shown these machines emit 23 times more carbon monoxide and nearly 300 times more non-methane hydrocarbons一toxic chemicals that contribute to ozone pollution一than a 2011 Ford F-150 SVT Raptor.

Communities All Over the Nation Support the Ban

Hundreds of municipalities, counties, and states are cracking down on the use of gas-powered leaf blowers, restricting the times these machines can be used, the seasons, and even outright banning them. These include the communities that have been most impacted by their noise, but some communities are concerned about air pollution and climate change, including many in California, partly because the state gets to set its own emissions standards.

What to Do Instead of Blowing Leaves

There are several alternatives to blowing that both homeowners and landscapers can do to move leaves. From shredding and composting to raking, here are a few options.

How to Use Electric and Gas-Powered Blowers Responsibly

Many municipalities that haven’t banned gas-powered leaf blowers are restricting their use. Nearly 20 cities in California; Brookline, Massachusetts; The Township of Montclair in New Jersey; more than 10 cities in New York; and Portland, Oregon have banned their use.

Given the environmental impact of gas-powered leaf blowers, the hearing damage they can cause, and their nuisance in neighborhoods all over the nation, it’s understandable that municipalities are demanding these machines become a thing of the past. Fortunately, there are plenty of electric leaf blowers available to get the job done if you still want to blow your leaves.

With Gas Leaf Blower Bans, Save Up to 41% on an Electric Alternative

How to Pick the Best Leaf Removal Service After Searching ‘Leaf R...

10 Weird But Useful Gadgets You Might Not Have Yet