How to Get Rid of Carnivorous Hammerhead Worms (Hint: You Definitely Shouldn’t Cut Them Into Pieces)

Your garden and the earthworms inhabiting it will thank you for getting rid of invasive hammerhead worms, but you’ll need to take special measures to eradicate them safely. 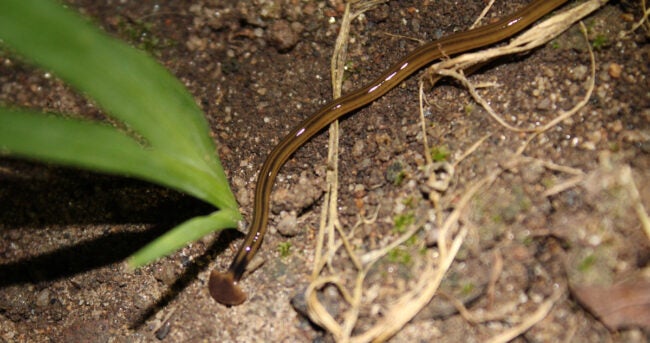 Native to Southeast Asia, hammerhead worms have been found in parts of the United States since 1980 and have become invasive around the world. However, their need for high humidity means they are most often found in tropical and subtropical regions. They prefer cool, damp habitats, and because they are light sensitive, they feed at night.

Like the hammerhead shark, the hammerhead worm gets its moniker from its distinctive spade-shaped head. It has a long, flattened body that ranges from 8 to 15 inches, and it can be found in shades of gray, brown, gold, and green. The worm secretes a potent neurotoxin, tetrodotoxin, which it uses to immobilize its prey and deter predators. The noxious chemicals it releases can cause skin irritation in humans and trigger nausea in animals who consume the worms.

Related: The Latest Invasive Insect Threat All Homeowners Should Know About

Because hammerhead worms consume beneficial worms, secrete poisonous toxins, and transmit harmful nematode parasites, they should be removed whenever found. Care should be taken to avoid touching them, but if you do, it’s advisable to wash and disinfect your hands.

This flathead worm was first brought to the United States in horticultural plants and has been found in greenhouses since 1901. Its inconspicuous eggs hide in plants, which are then distributed by landscapers, garden centers, and other retailers. With no known natural predators, the worms spread quickly.

The first U.S. spotting of hammerhead worms was in Texas approximately three to four decades ago. They have since spread to coastal regions, where they enjoy tropical and subtropical conditions, but they’ve been documented in greenhouses everywhere. Like the earthworms they devour, they need the moist environment of the soil. Like their prey, they can often be found on top of the soil after a rain.

STEP 2: If you spot a hammerhead worm, take a photo.

“Should I kill hammerhead worms?” Yes, but first take a photo and send it to your local cooperative extension service, your state’s department of natural resources, or, if you live in Texas, to the Texas Invasive Species Institute. These groups study and track invasive species like this worm, gathering numbers and locations of sightings. None of the hammerhead worm species have been evaluated for inclusion on the IUCN Red List, and there’s no evidence that their numbers are threatened.

If you find a hammerhead worm in your garden, capture it in a sealable plastic bag or some other sealable container. Don’t touch it with your hands; use a stick, gloves, or paper towel to place it into the container. If you do touch it, be sure to wash and disinfect your hands.

Placing the worms in a container ensures they won’t be able to get away and makes it easier to apply a solution to kill them.

Apply salt and/or grain vinegar concentrate to the hammerhead worms in the bag, seal the bag, and place it in the freezer for 48 hours to ensure that the worm has dissolved. Soapy water, neem oil, citrus oil, boric acid, or pesticides may also work.

Do not cut the worm into pieces. Each section can regenerate into a fully developed worm within a few weeks. One of the ways they reproduce is by asexual fragmentation, so you’ll only compound the problem if you cut up the worm in an attempt to kill it.

STEP 5: Discard the dissolved worms and sanitize the container.

After a hammerhead worm has been sealed in a plastic bag, treated with salt (or a combination of salt and vinegar), and placed in the freezer for 48 hours, the Texas Invasive Species Institute recommends discarding the still-sealed baggie in the trash.

Alternatively, you can use a glass jar with a lid or any kind of plastic sealable container. Most sources advise tossing the sealed container into the trash, but if you prefer to reuse it, it should be cleaned and disinfected with alcohol or another strong disinfectant.

STEP 6: Keep on the lookout for additional hammerhead worms and repeat Steps 3 through 5 as needed.

If you have found one hammerhead worm, there are probably more, so remain vigilant. Examine your garden, particularly in the early morning after a rain when they’re likely to be easily found on the surface. Be sure to take a photo to be sent along to the appropriate authority, then collect, kill, and freeze the worms before you dispose of them as described above. Because they secrete toxins, it’s imperative that you handle the worms properly, and since they can reproduce by division, ensure that they are completely dead before being discarded.

It’s important to keep an eye out for these invasive, toxic worms. The slimy predators threaten earthworms, which are vital to our ecosystem because they help decompose organic matter and incorporate soil amendments. Knowing how to identify and correctly kill and dispose of these nuisance worms will help keep your garden and your pets safe and healthy.

Related: How To: Get Rid of Armyworms

How to Get Rid of Cabbage Worms
Advertisement