Can Smart Home Technology Save Your Yard From Mosquitoes?

Thermacell’s latest mosquito repellent is like no other. Here's how it works. 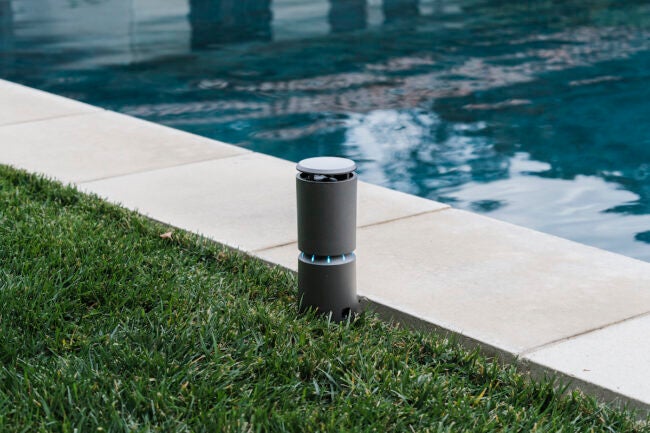 Nothing puts a damper on an outdoor meal or gathering like a swarm of mosquitoes—and they’re more than just a nuisance. They also can be incredibly dangerous as carriers of diseases like encephalitis, Chikungunya fever, West Nile virus, and Zika virus.

Those living in areas with high mosquito populations know how irritating they can be, and may even avoid using their outdoor living spaces during certain times of the year when mosquitoes are most prevalent. Luckily, there have been major advances in mosquito-repelling technology in recent years, meaning you’ll never need to light a citronella candle again.

Thermacell is known for their innovative mosquito-repelling devices, and the brand’s latest release is being touted as the first smart, on-demand mosquito-repellent system. CEO of Thermacell Repellents Steve Hill says, “Thermacell has been effectively fighting mosquitoes for the past 22 years and we are thrilled to step into the smart home space with the first connected mosquito repellent system,” adding, “It’s now easier and more convenient than ever to enjoy the outdoors with fewer mosquitoes.”

Rather than setting up your Thermacell when you’re already outdoors—and potentially being attacked by mosquitoes—the new system allows users to go through an app to power on their repellers from the comfort of their homes. It’s suitable for both small and large outdoor spaces, covering an area of between 945 and 1,600 square feet, depending on the kit you purchase.

Let’s explore how Thermacell’s devices work to repel mosquitoes and how the Liv system upgrades the brand’s existing functionality with smart technology.

Get the Thermacell Liv Smart Mosquito Repellent System at Thermacell.com

How does Thermacell mosquito repellent work?

All of Thermacell’s devices operate using the same basic technology. Users insert a repellent cartridge into the device. The cartridges contain 5.5 percent metofluthrin, a synthetic molecule inspired by a naturally occurring chemical that is completely odorless and undetectable to humans. The repellers warm up the cartridges, causing the chemical to disperse and create a protective zone in the surrounding area.

According to Thermacell, the Environmental Protection Agency (EPA) and the World Health Organization (WHO) have concluded that there is a reasonable certainty that no harm will result to bees or other terrestrial wildlife if using the product according to the label instructions.

What makes the Liv system unique?

The Liv system builds on Thermacell’s existing functionality and pairs it with smart home technology. Unlike many of Thermacell’s most popular products, which are portable, the Liv system includes repellers that are designed to be permanently installed on your property. They’re made from die-cast aluminum and are weather-resistant, meaning they can remain in place year-round.

The Liv system includes a hub and between three and five repellers. Each repeller creates a 20-foot zone of protection. The repellers are powered via an electrical outlet, eliminating the need for batteries.

The Liv system pairs with the Liv+ app, which allows users to schedule their repellers to power on at specific times. If you eat dinner outdoors every night, for example, you can ensure the area is mosquito-free by the time you head onto the patio. It can also be controlled via voice commands by pairing it with Amazon or Google smart speakers. The app also lets users see the repellent levels in the cartridges, so they can replace them as needed.

Get the Thermacell Liv Smart Mosquito Repellent System at Thermacell.com

So, You Want to... Plant an Herb Spiral Garden

3 Surefire Ways to Attract Dragonflies to Your Yard for Natural M...