Is Your Basement Tornado-Ready? How to Prep the Space—And What to Keep on Hand

A basement is the safest place to take cover during a tornado. Here's what you can do in advance so that your family is ready to shelter in place at a moment's notice. 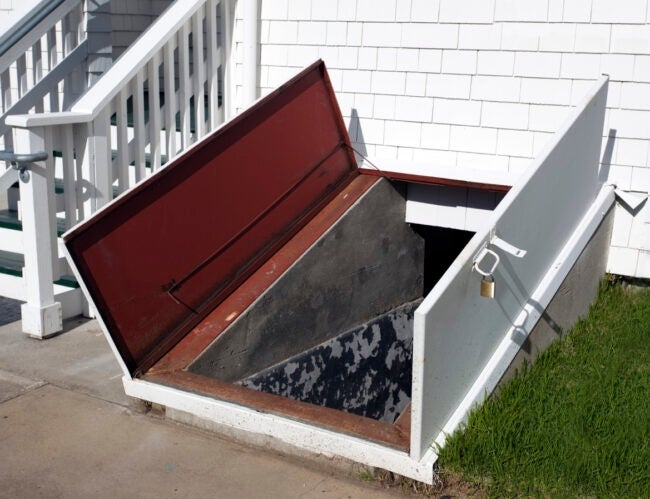 Tornadoes are violently rotating columns of air connecting a thunderstorm to the earth below, and they can occur at any time and anywhere. In fact, the National Centers for Environmental Information estimates the average number of tornadoes in the United States to be more than 1,000 annually, with peak numbers coming in April, May, and June.

Preparing for these events can be critical, and a basement is undoubtedly the best place to take shelter. But how do you prepare a basement for tornado readiness? Keep reading to find out what you need in your subterranean shelter.

Before Heading to the Basement

If a tornado warning is in effect, a funnel cloud can occur at any time, so getting to the basement ASAP is of the utmost importance. Immediately gather children and pets before heading downstairs.

If there is time and you know how to do so, shut off the home’s utilities. Shunting the electricity, gas, and water fed to the house can prevent making a dangerous situation worse due to fires, floods, and explosions.

Shelter Near the Center of the Basement

When choosing a spot in the basement to gather and shelter, there are a few considerations. For one, a spot near the center of the basement and away from any windows is key. Windows are susceptible to air pressure and flying objects, so it’s best to stay away from them in a tornado.

Second, consider the weight of objects on the floor above you. Heavy items like pianos, refrigerators, bookcases, and safes can make escape impossible if structural damage occurs, so it’s best not to be underneath them.

It’s also a good idea to stay away from any utilities or appliances that aren’t bolted down, such as furnaces, water heaters, washers, and dryers.

A Stash of Food and Water is Critical

Unfortunately, storms can last quite a while, and tornadoes can cause widespread damage that results in extended rescue efforts. For that reason, it’s essential to have enough food and water on hand for everyone, including the family pets.

Water is most important. Ready.gov suggests one gallon of water per person per day. So for a family of five, a good rule of thumb is to store 35 gallons of water, ensuring that there is enough water for a week-long emergency.

As for food, it’s important to keep at least a three or four-day supply of non-perishable foods like canned meats, beans, fruits, and vegetables. It’s possible to go much longer without food than water, but food can bring a critical boost in morale. And, don’t forget to pack the can opener!

Other Necessities for Tornado Readiness

Beyond just food and water, there are other necessities that every basement tornado preparedness kit requires. Many of these items can stay in the basement, but be sure to check them on a monthly basis to ensure they’ll still serve their purpose. These items include:

Helmets for everyone in the family can be a benefit, as well. The American Meteorology Society states that head injuries are one of the leading causes (23 percent) of deaths during tornadoes. Even a bike helmet can help.

When Sheltering in Place, Comfort Items Are Key

With the bare necessities covered, there are some other items that could make an extended shelter-in-place a little more comfortable (particularly for families). Items like sleeping bags, cots, extra clothing, and blankets can make a world of difference during the storm and the time thereafter. Also, beloved stuffed animals, board games, and coloring books can help distract children from the goings-on around them.

Families with pets need to make preparations for their furry friends as well. Dogs should be kept on leashes if possible, as the loud noises and uncertainty can make pups nervous and unpredictable. Cats and other small pets should be kept in crates other than to eat and relieve themselves (keeping litter on hand can be helpful). It’s also a good idea to keep some doggie waste bags for picking up solids.

Also, don’t forget to keep water and food on hand for the pets. While they could survive on human food, the disruption to their digestive systems can cause quite a mess—something you really don’t want to deal with in a shelter-in-place situation.

While the basement is the safest place during a tornado, there are items in the basement that are potentially dangerous. Appliances mentioned earlier, including washers and dryers, water heaters, and furnaces, should be avoided. Also, beware of basement refrigerators, large shelving units, and any other large objects that aren’t permanently mounted to the basement floor or walls. It’s also a good idea to look out for basement-exiled exercise equipment, as these apparatuses tend to be very heavy.

10 Total Kitchen Makeovers—and What They Cost

Realtors Expect These Neighborhoods to Sell Big in 2020

9 Cool Projects You Can Make with Pipe and Fittings