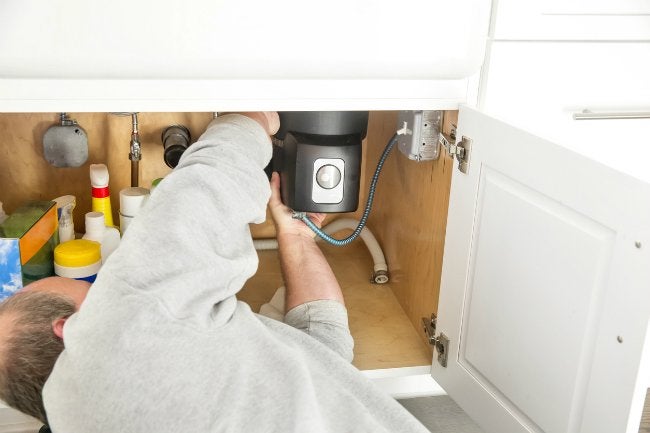 Q. After dinner, I rinsed off the dishes in the sink like I always do, and then I flipped on the garbage disposal switch to grind the food scraps. Nothing happened. Should I start shopping for a new disposal, or is there a way to fix it?

A. Garbage disposal stopped working? Well, while there’s a slim chance that you might have to replace your disposal, it’s unlikely. Odds are that the problem is something you can fix, often in just a few minutes. Proceed with the following DIY troubleshooting tips to get your garbage disposal back up and running.

Start with a power check.

Whenever an appliance like a garbage disposal is not working, the first thing to do is to check whether it’s still plugged in. While this step might sound overly simplistic, think about the under-sink area in your home: If you store cleaners or a wastebasket under your sink, the garbage disposal plug can easily get knocked loose or pushed out of the outlet. Plug it in, and you’re back in business!

In newer homes, local building codes typically require the electrician to run a single circuit for the garbage disposal and the dishwasher to share. In homes where additional outlets are on the same circuit, however, running the garbage disposal while something else is operating—such as a toaster or countertop griddle—could cause the breaker to trip.

Before you locate the tripped breaker in your home’s main electrical panel to flip it back on, test how many other outlets in the kitchen still have power. Plug something small, like a desk lamp, into any other outlets available in the kitchen; if additional outlets have no power, it’s likely that too many outlets are on the same circuit.

A simple workaround is to run the disposal only when no other appliance is going, but a more permanent fix would require an electrician to run one or more additional circuits in order to prevent overloading the one that powers the garbage disposal.

Rotate the flywheel and impellers.

A garbage disposal uses impeller arms attached to a flywheel that’s surrounded by a shredder ring. When the flywheel spins, the impellers and ring work together to shred anything that comes into contact with them. Sometimes pieces of metal or other materials that are too hard for the impeller arms to break down become caught in the impeller or between the flywheel and the shredder ring, jamming them. If this happens, you’ll need to remove these objects from the garbage disposal.

If the garbage disposal is indeed jammed, you might hear a telltale hum when you turn it on. Before fixing a jammed garbage disposal, first cut the power to the unit either by unplugging it, or if it’s hardwired, by flipping the power breaker.

Pro Tip: If you don’t already own a hex wrench set, get one! Handy for everything from IKEA furniture assembly to common home repairs like this, a good set of hex wrenches is a must-have.

Check under the sink for leaks.

Check the discharge tube that connects from the disposal to the sink drain line. If you only notice leaking when the dishwasher is running be sure to check the dishwasher drain line, which connects to the disposal near the top of the unit. If the leak is coming from one of the lines, the fix is fairly easy: Tighten the connections. If that doesn’t work, you’ll need to replace the lines.

Replace the garbage disposal, if it comes to that.

Learn how to keep your garbage disposal in top shape—and running for many years to come.

To avoid having to fix or replace a garbage disposal again anytime soon, learn how to maintain it properly. Remember, the machine works wonders grinding up soft bits of food that remain in the sink after meal preparation, but there are some things that you should never put down a garbage disposal. Avoid grinding animal bones, for instance, as well as nuts, certain shells, seeds, and potato peels. Even chunks of fibrous food scraps, like raw celery, carrots, or cabbage will wear down the impellers or strain the unit’s motor.

Certain foods can also create clogs in a garbage disposal. Avoid sending coffee grounds down the drain because they can build up in the drain pipe. The same goes for grease, oil and fat, which can stick to the insides of pipes.

Rather than putting food in the garbage disposal, put the bulk of these scraps in the trash can, or better yet—if they’re non-meat scraps—the compost pile.

Always run the garbage disposal with plenty of cold water and allow the unit to run a few seconds after the food grinding is complete to clear away residual bits of food that can cause odors.

TAGS:
APPLIANCE
HOW TO
REPAIR
KITCHEN
More From Bob Vila

Solved! What to Do When Your Kitchen Sink Is Clogged
Advertisement

5 Things to Know About Replacing a Garbage Disposal

Solved! This is How Long Refrigerators Last

Solved! What to Do When Your Oven Is Smoking