This sturdy laser light projector displays big, bold patterns in Yuletide colors and withstands wintry weather. I tested it to find out if it belongs under your tree. 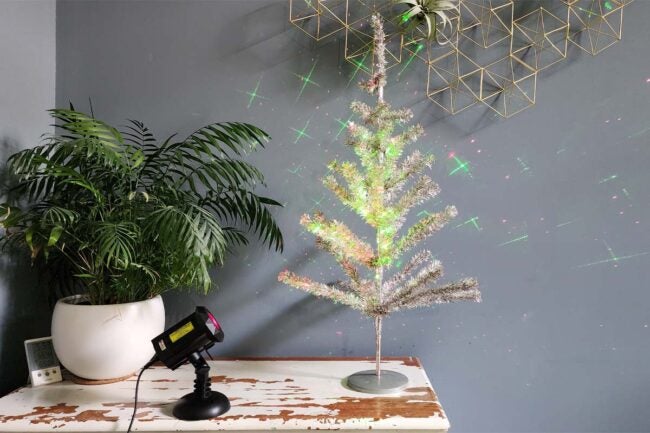 For some people and neighborhoods, decorating for Christmas has become something of a competitive sport or a yearly obsession, while others just want to turn on something festive quickly and get on with making merry. In either case, Christmas light projectors can help. They can put a final bow on a large, impressive Christmas display, or they can be quick and easy ways to save time and backbreaking labor from not having to put up stringed lights.

Within a large field of options, LedMall has built some standout options. Its Motion 8-Patterns-in-1 Christmas Lights Projector casts a wide net with features that make it suitable for most homes, both inside and out. I tested it thoroughly for about 2 weeks—day and night, both outside and inside—to find out if it’s an angel or a humbug.

The LedMall Motion 8-Patterns-in-1 Christmas Lights Projector: At a Glance

Most Christmas light projectors are either laser light projectors or lamp projectors that display images from internal slides. The LedMall Motion 8-Patterns-in-1 Christmas Lights Projector is a laser projector for outdoor and indoor use, and it displays patterns in red, green, and blue. Its laser patterns are combinations of spirals, crisscrosses, dot arrays, and other shapes.

It does not, however, display Christmas-specific graphics like Santas or candy canes, as some other Christmas light projectors do, but it’s positioned as a Christmas light projector because of its sharp, vibrant red and green colors. (The blue can be switched off from the remote control.) It can also easily blanket the entire side of a house or a large indoor wall or ceiling with its lasers for an expansive holiday display.

For example, at a distance of about 30 feet, its projection covers an area of about 1,650 square feet, according to the manual. The maximum recommended coverage area is 2,500 square feet (50 feet long by 50 feet wide). At a far enough distance, it can cover even larger areas than that, but at longer distances, the lasers’ brightness starts to decrease.

To protect against the snowy and/or rainy conditions that many experience during the yuletide season, the LedMall projector unit is IP67 weatherproof, meaning it is dustproof and resistant to heavy jets of water and temporary submersion in water. The power adapter on the included 25-foot power cable is IP44 rated, which means that it is not dustproof and resistant only to splashes of water—something to consider if it’s plugged into an extension cord outside.

How Easy Is the LedMall Projector to Set Up?

After some very basic assembly, I was enjoying the Motion 8-Patterns-in-1 Christmas Lights Projector’s dazzling display just a few minutes after unboxing it. An angle-adjustment screw attaches a strong plastic stand to the main projector unit, and two mounting options then easily screw into the stand: a tabletop base for setting the projector on a flat surface or a ground stake for mounting the projector in the soil of a yard or a garden planter. The power cable securely screws onto the projector, preventing accidental unplugging.

For a semipermanent installation, the box comes with three wall-mounting screws that can attach the tabletop base to a wall, floor, ceiling, etc. And for extra security outside, an included security cable with two keys locks to the projector and can wrap around a fence, lamppost, etc. It’s not absolutely theftproof, but should at least deter potential Grinches from making off with your laser lights.

Overall, I found setting up this projector to be hassle-free, fast, and intuitive; I didn’t even need the instructions.

Is the LedMall Motion Christmas Lights Projector Easy to Use?

The Motion 8-Patterns-in-1 Christmas Lights Projector turns on when first plugged into a power outlet and begins to cycle gradually through its patterns in all three colors. After that, the included remote control operates its functions since there are no onboard controls. With the remote, I could easily use the three dedicated color buttons to turn each color on or off and display one, two, or all three colors. The Auto button creates a randomly changing mix of colors and patterns, and the Flash button does the same but while flashing the light off and on intermittently. The “+” and “-” speed buttons adjust the motor to make the motion of the patterns fast, slow, or stationary. There’s nothing complicated about it.

I was always able to use the remote control wherever I needed it because its 50-foot operating range—without too many obstructions in the way of the projector—was enough for my needs, whether inside or outside.

While the remote control has a power button, it also has a handy timer function that lets users set it and forget it if they want the projector on at a certain time every day. The timer has four interval settings: 2, 4, 6, or 8 hours. Once the timer is on, the projector will run for the set interval and then go into standby mode until it powers on at the same time the next day.

For example, I wanted the projector on from 5 p.m. to 11 p.m. every day. I turned the timer on and selected the 6-hour interval at 5 p.m. one day, and then it shut down at 11 p.m. and turned it on again at 5 p.m. on each following day. The timer interval shuts off from the remote’s reset button or when the projector is unplugged. In my tests, the timer function worked well and made it very convenient to not have to worry about turning the projector on or off every day.

How Well Is the LedMall Motion Christmas Projector Designed?

Allow me to begin with the one design flaw I found with the Motion 8-Patterns-in-1 Christmas Lights Projector. The projector head has a good adjustment range from its stand of 180 degrees, meaning I could point it straight up or straight down from the stand. However, when the projector is used with the tabletop base and its head points straight up, it is too heavy to balance and it falls over. It has to be pointed a little bit forward to stay standing. That was not a problem when using the ground stake outside as long as the stake was secure enough in the ground.

Other than that, this model’s robust design makes it stand out among the best Christmas light projectors. The main projector unit that houses all the electronics is very solid metal. It suggests a high standard of durability that I inadvertently put to the test when my Roomba robot vacuum ran over the projector’s power cord, knocking it down a couple of feet onto the concrete floor. Fortunately, the unit showed no sign of damage and continued to function perfectly throughout my testing. Both the projector and its power adapter were also exposed to some light rain while I had it outside, but the unit’s weatherproofing proved more than enough to handle it without concern.

How Good Are the LedMall Projector’s Patterns and Lights?

All the other great attributes of a Christmas light projector won’t mean much if its actual images aren’t beautiful and appropriate for the most wonderful time of the year. But I’m telling you why you better not pout: The Motion 8-Patterns-in-1 Christmas Lights Projector adds festive ambience indoors and outdoors. Inside, users can set the projector’s display on a slow speed, adding to that sense of peace one gets from relaxing by the tree. Outside, users can make the brightest outdoor Christmas display even merrier with the projector’s display on its fastest flash setting.

During bright daylight, its laser patterns look much more subdued, but during overcast days or at dusk, they manage to make a good impression. They can stand out nicely when projected onto a Christmas tree or other trees as well. However, it’s on a dark night when these lights really shine, so to speak. That’s when the richness of their colors and the detail of their evolving lined and dotted patterns can be mesmerizing. That’s also when I most appreciated how well this projector can completely transform a large wall, wrapping it up like a shiny, glittering present.

Is the LedMall Projector Worth the Money?

When compared to some of the other best Christmas light projectors available, the LedMall Motion 8-Patterns-in-1 Christmas Lights Projector is priced near the top of the heap. However, I am a firm believer in paying for quality rather than saving some money on a product that may not survive the holiday season or that I may not enjoy as much.

After testing the unit as much as I could over about 2 weeks, the projector always functioned reliably and withstood some rain as well as a fall that could have damaged a less robustly built model. There’s always a chance for some variance from unit to unit, but the LedMall projector I tested inspired confidence that it was made to last. And not only did I enjoy the vibrancy of its lights and patterns, but my friends and family who saw it did as well.

Is the LedMall Christmas Light Projector Right for You?

For its combination of sturdy construction, mounting options, accessories, and its brilliant laser lights display, the Motion 8-Patterns-in-1 Christmas Lights Projector ranked very high when I tested a group of eight of the best Christmas light projectors. I would not recommend it to someone who would rather have a slide projector that shows cartoonlike Christmas illustrations rather than laser lights patterns. However, for anyone who likes the style of laser light projections, this model makes for an excellent choice.

There is one alternative though that for a little bit more money provides the same advantages of this projector with the addition of specifically Christmas-themed patterns. LedMall also makes the 3-Models-in-1 Christmas Lights Projector, which I also tested. It includes all the same features, weatherproofing, and build quality, but in addition also has six dedicated Christmas patterns (including Santas, bells, candy canes, snowflakes, and gingerbread houses) and six Halloween patterns. Dedicated buttons on its remote control cycle through the Christmas patterns, Halloween patterns, and the nonspecific laser patterns of red, green, and blue.

17 Design Inspirations for Mudrooms and Entryways

Under the Eaves: 21 Arresting Attic Rooms

You Never Knew These 12 Common Items Can Expire