Solved! 4 Fixes for When a Door Won’t Latch

Repair unreliable doors that won’t latch to regain a sense of security and privacy when you close the door to the bedroom, bathroom, or your home. 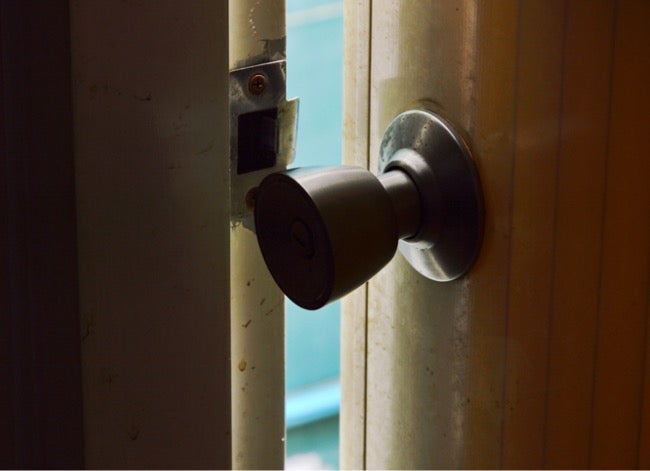 Q: We have a bathroom door that sometimes won’t latch, so the door can still be opened with a simple push. This has led to more than one embarrassed guest. Why won’t the door latch properly, and how can we fix this issue?

A: When a door won’t latch, the latch is missing the hole in the strike plate on the door frame. This misalignment often happens with frequent use of a door, as hinges can allow a door to sag over time.

Test to determine where the misalignment is happening.

1. Tighten the hinges using a screwdriver.

Older doors and doors that are frequently used may experience sagging at the hinges as gravity pulls the door down. This changes the swing of the door and can result in a misaligned door latch that contacts below the strike plate hole. Use a screwdriver to tighten the screws in the door hinges so that the door is properly supported by the door frame.

If tightening the screws doesn’t solve the problem, consider using a longer 3-inch screw on the door jamb side of the hinge to grab the wall framing and pull in the entire door frame slightly. Drive the 3-inch screw into the top hinge to help lift the door into position, if the latch contacts below the strike plate hole. Drive the screw into the bottom hole to help pull the door down, if the latch contacts above the strike plate hole.

It might be time to call a pro
Find licensed contractors in your area and get free, no-commitment estimates for your project.
Find Pros Now

2. Shim or sand down under hinges.

If the problem persists after adjusting the screws in the hinges, then the door frame may need to be shimmed or sanded. Shimming the hinges involves removing the hinges from the door frame and cutting a small piece of cardboard (or similar material) to fit into the hinge mortise. When the cardboard is in, replace the hinge and check the door. Shimming typically corrects the alignment of the door if the problem is related to sunken hinges. The extra material adds an additional cushion to support the hinge and balance the door.

3. Enlarge the strike plate hole with a metal file.

RELATED: What Would Bob Do? Repairing a Door That Sticks

RELATED: 3 Fixes for a Squeaky Door

4. Move the strike plate up or down.

RELATED: How to Install Door Hardware

Finish by filling any gaps with a wood filler and paint or stain.

If tightening the hinges or using longer screws to adjust the alignment of the door fixes the issue, then the problem is solved. However, if you shimmed or sand down the hinges, enlarged the strike plate hole, or moved the strike plate, then there may be some clean-up and touch-up required to finish the job.

It might be time to call a pro
Find licensed contractors in your area and get free, no-commitment estimates for your project.
Find Pros Now

How to Adjust Cabinet Hinges: Simple Solutions You Can DIY
Advertisement

3 Fixes for a Squeaky Door