Want a Better Night’s Rest? Try Sleeping Like a Scandinavian

Follow these slumber strategies to eliminate some common reasons why many Americans struggle to get a full night’s sleep. 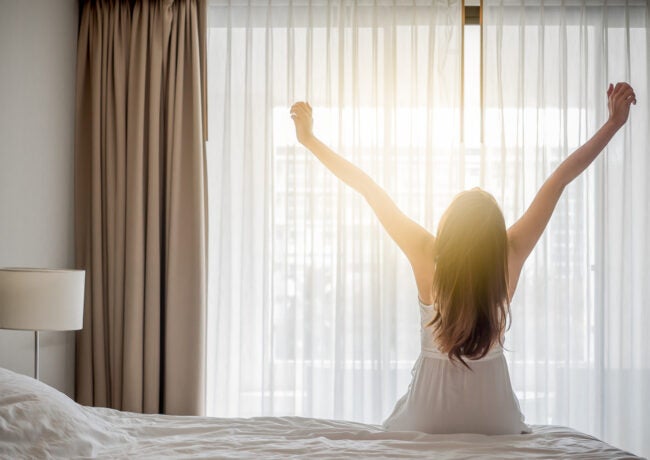 Sleep is one of those universal needs that you might assume looks the same in every country. Turns out it doesn’t. Scandinavians have sleep theories and traditions that are a little different from the American standard. The Scandinavian sleep method includes separate duvets for each partner, no top sheet, and open windows.

A quick question asked on social media revealed that many people have been using part or all of these sleep strategies for years, though many didn’t know it was common practice in other countries. With the help of American Karli Winters, who’s been living in Denmark for the past 2 years, we got the lowdown on why it’s worth trying the way Scandinavians sleep.

No More Fighting Over Covers

A third of American adults do not get the recommended 7 hours of sleep each night, according to the Centers for Disease Control and Prevention (CDC). While couples tend to sleep better than singles, fighting over covers is one reason why couples might not get a full night’s rest. In Scandinavia, they avoid this issue with separate duvet covers.

When Winters moved to Denmark, one of the first traditions she and her husband adopted was separate duvets. “It’s nice because we never fight over the blanket at night anymore,” says Winters. That nighttime tug-of-war, when neither person is as compassionate as when fully awake, no longer exists.

You Get to Choose Your Own Duvet

Since you’re the only one who uses the duvet, you get to choose the weight and style that works for you. No longer will one partner have to shiver or add extra blankets while the other tosses covers off from overheating.

Winters admits that she and her husband prefer different duvet weights. Since adopting the sleep traditions of their new country, they both sleep better. If you love down and your partner doesn’t, you can get the fluffy down duvet of your dreams, and your partner can get the streamlined microfiber duvet they’ve been eyeing.

Snuggle with Your Duvet

Snuggling with your duvet might be less important than not having to share, but it can make a difference in sleep comfort. Winters noted that this was one of her favorite benefits. She prefers to sleep with her feet outside the comforter. Now that she has her own, she can do that on either side of the cover rather than only on her side.

When it’s a duvet for one, it’s possible to wrap and twist into a knot or use the comforter as a pillow beneath your head, behind your back, or as a pillow between your knees. No matter how you use it, you get more options for better comfort, and you’re not stealing covers from your partner.

Sleeping with your own duvet might feel weird, but sleeping without the top sheet can also take some adjusting. However, Winters finds that she now prefers her duvet-only bed. As she puts it, “It’s the whole reason the separate duvet [thing] even works.”

There’s a good portion of couples who end up with the top sheet scrunched down at the bottom of the bed. Others find that one partner gets the top sheet, while the other uses the duvet, and both tug to get enough coverage. Without the top sheet, there’s no more shared bedding other than the fitted sheet on the mattress.

It also makes sense to nix the top sheet when you consider how duvets work. Duvets require a cover, which can essentially act as the top sheet. Instead of washing a top sheet every week, you can wash the duvet cover.

Changes in body temperature at both ends of the spectrum can disrupt your sleep cycle prematurely. Consequently, cold and hot sleepers alike can get behind a little separation at night. While each person can get a duvet of different weights, that’s not the only way this method helps temperature control.

Two bodies under the same set of covers trap a lot of body heat, which can become uncomfortable for those who sleep hot. And, of course, the battle for covers can leave one partner left out in the cold. Plus, if you need to throw off your duvet because you’re too warm, you won’t disturb your partner’s body temperature under their duvet.

The final part of the Scandinavian sleep method involves open air sleeping, which is also called plein air sleeping. If you want to sleep like a true Scandinavian, keep your windows open every night no matter the weather. In many Scandinavian countries, parents leave their babies outside to nap. If it’s cold, they wrap them warmly.

In Winters’ experience, plein air sleeping has done wonders for her sleep quality and temperature control. But there’s one part that hasn’t worked out as well, and that involves bugs. In Denmark, most windows don’t have screens. Most Americans have window screens to prevent bugs entering a home, so avoid the Scandinavian bug issue and keep the screens when you leave your windows open to sleep.

The Best Earplugs for Sleeping and Blocking Out Noise
Advertisement

The Best Firm Mattresses for Your Bed

The Best Wedge Pillows for Your Bed

The Best Camping Air Mattress for Comfort Anywhere You Go

The Best Organic Mattresses for a Good and "Green" Night's Rest