Don't shell out any cash for spades, shovels, or plant markers—you already have what you need to make your own! Rummage through your recycling bin to save on supplies with this clever 5-minute DIY. 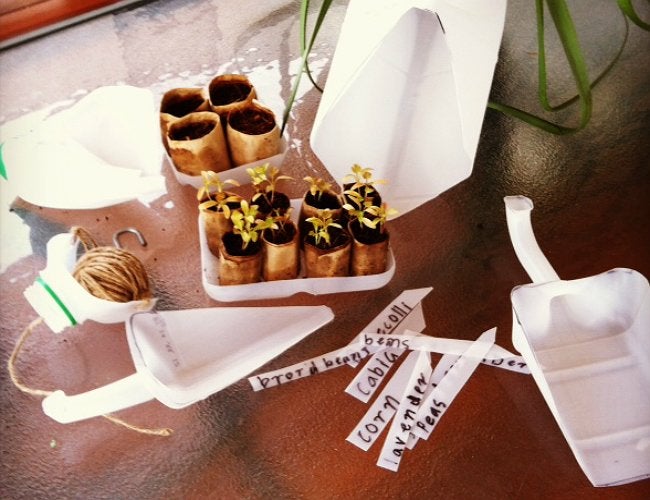 When A Farm of Your Home‘s blogger Melissa Barrett first moved to Australian city of Perth, her backyard was a tiny dirt plot with a few barren vegetable beds. But as she settled into her new home, a gardening obsession took root, followed by a greenhouse, a frog pond—even an apiary for visiting bees! Soon, the ever-expanding garden became a family project, and sometimes there weren’t enough tools to go around. Her two littlest helpers lost spades and shovels and bickered over what was left. Instead of wasting time hunting for her long-gone tools, she raided her recycling bin for a free (and briliant!) fix.

Armed with a Sharpie and a pair of scissors, Melissa traced and cut four spades and more out of emptied milk and juice jugs. Lightweight yet durable, the plastic containers boast an easy-carry handle and a wide, square base—two features that lend themselves to a variety of functions, given a little imagination. Melissa took advantage of the rounded corners and, depending on the jug’s shape, traced a scoop for a spade or shovel out of the side with the handle. Incorporating the hollow handle into the design provided a sturdy grip for her newest DIY digging implement. With the remains, she turned the uncut bottom into shallow seedling trays and the unused sides into a handful of inch-wide plant markers—easily doubling her supplies without spending a penny or driving to the store. For gardeners on a tight budget, getting resourceful with recyclables is an eco-friendly way to save some green.

Every homeowner knows that planting, weeding, and keeping the garden looking great means getting a little dirty. Even the best spades and shovels rust and break, so why not cut out a few spares?  It’s as Melissa says: “As long as we drink milk, we’ll have a supply of little scoops and shovels, tags, and trays.”

FOR MORE: A Farm of Your Home

Side Yard Upgrade: 14 Ideas for Transforming This Forgotten Outdo...
Advertisement

The Best Worm Composters of 2022

These 10 Renovation Trends Will Be Popular in 2020