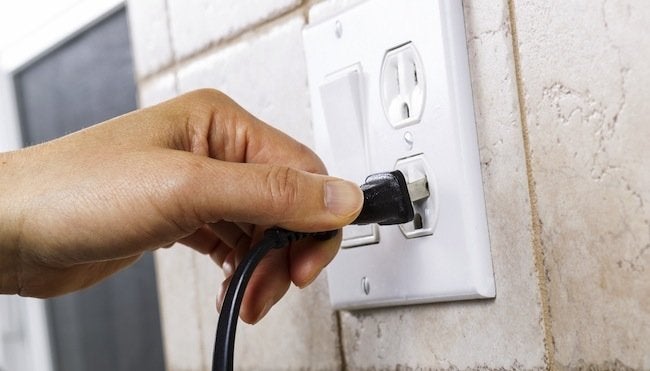 A home’s electrical system is prone to wear and tear. Regular testing and evaluation of receptacles, switches, and breakers can prevent dangerous situations down the road.

There are two electrical upgrades that should be installed to protect your home: ground fault circuit interrupters (GFCIs) and arc fault circuit interrupters (AFCIs). GFCIs protect against electrical shock caused by ground faults or leaking electrical current. These devices monitor the current in a circuit and interrupt or stop the flow of power to that circuit if a spike or loss of power is detected. In new construction, GFCI receptacles are required by code in bathrooms, kitchens, and garages, on outdoor outlets, and in crawl spaces or unfinished basements.

“Anywhere there is the chance of contact with water or the ground, there should be a GFCI,” says Brett Brenner, president of the Electrical Safety Foundation International (ESFI). “It’s estimated that GFCIs accounted for roughly a 70 percent reduction in electrocutions,” he says. GFCIs are also available as circuit breakers installed in the panel, giving ground fault protection to designated circuits in the home.

Arc fault circuit interrupters (AFCIs) protect a home against electrical fires. ACFIs protect against fire-causing arcing much like GFCI’s protect against stray current. When an arc is detected, power to the circuit is interrupted. Arcing can be caused by any number of factors, including damaged or worn wires, incorrect wiring, and loose or wet connections. Newer AFCIs are able to distinguish between dangerous arc faults and normal arcing caused by fluorescent lighting and some dimmers and switches.

“AFCI’s give great fire protection to homes with older wiring,” says Mike Holt, licensed electrician, electrical inspector, instructor, and founder of Mike Holt Enterprises, providers of educational resources to those in the electrical profession and related fields. Currently, the National Electric Code requires AFCI breakers for circuits providing power to bedrooms, living rooms, family rooms, and other common rooms in new construction. The cost for an AFCI breaker varies by manufacturer, but consumers can expect to pay around $30 to $35 apiece.

Some old homes were designed to run off less power than the modern home. Most states have a 100 amp minimum requirement. Homes running under that service could consider an upgrade to bring them to between 100 and 200 amps, which could run upwards of $2,000. Homeowners should evaluate their power demands first. “A homeowner can have an electrician test the system with an amp meter while all the big loads are on,” says Holt. “If the draw is over 75-80 percent of the service size, you might consider an upgrade. Otherwise you should be fine.”

Homeowners should also make routine checks of their receptacles and switches. Loose receptacles and switches,  as well as burn marks around outlets and receptacles, should be addressed immediately. Prompt repairs are also necessary if a receptacle is glowing or hot to the touch, or if a homeowner feels a tingle or similar sensation when touching something metal inside or outside the home.

Appliance cords, extension cords, and rarely used lights, like Christmas or patio lights,should also be inspected. “If a cord is worn, or the ground is broken, throw the cord away,” insists Holt.

One indicator of a potential wiring problem is if certain lights dim or brighten intermittently and for no apparent reason. “Lighting that flickers or acts erratically is a sign,” says Holt. Lighting can experience a momentary decrease in brightness when a large load has just started, or when a cycling appliance (an iron, for instance) is in use. If this is not the cause, homeowners should seek professional help.

The use and installation of generators has become a hot topic in the electrical community. Improper installation of a generator can lead to serious dangers in the home, to neighbors, and to utility workers addressing an outage. “Too many people are plugging their generators right into the panel without a transfer switch,” says Brenner. This can result in dangerous surges to houses on the grid, or fatal injury to workers restoring power.

Before doing any digging outside the home, homeowners should call “811.” This free national number connects the homeowner to professionals who will come to the home and mark the buried utility lines, preventing potentially fatal hazards.

Undertaking a project involving the home’s electrical system should not be taken lightly, and homeowners should hire a licensed electrician to handle maintenance or upgrades. “Working on the electrical system is a lot more dangerous than it appears,” Holt says. “Misconnecting one wire can result in death. It’s just not worth the risk.”

All You Need to Know About GFCI Outlets