From the presence of moisture to faulty electrical wiring, there are several reasons a GFCI outlet won’t reset. Here’s how to figure out what may have happened if an outlet isn’t working. 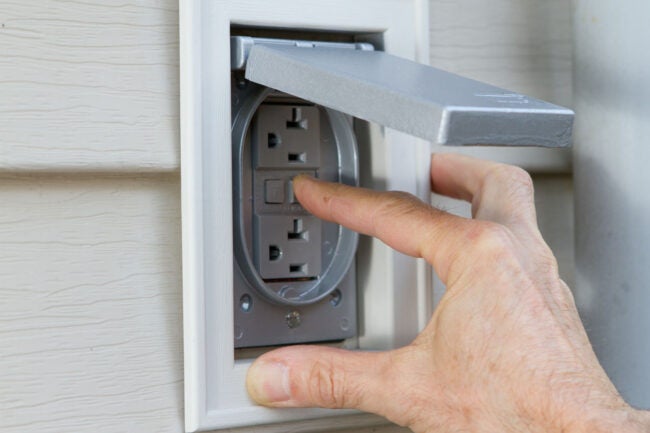 Q: I went to use my hairdryer in the bathroom, but I discovered some of the outlets have stopped working. My GFCI test button won’t push in when I try to reset it, but nothing has tripped in the breaker box, and the hairdryer works when I plug it into outlets down the hall. Why won’t my GFCI reset?

A: Ground fault circuit interrupters, or GFCIs, are outlets designed to shut off when it senses a ground fault or short in electricity. These outlets sense an overload or surge in electricity and instantly trip, triggering the breaker to cut off the electrical current to minimize the risk of electrocution. If an outlet is installed near any water source or moisture, building codes require that a GFCI outlet be used due to the increased risk of an appliance shorting.

When a GFCI won’t reset, it requires a bit of testing to figure out what’s going on. If a GFCI outlet isn’t working, triggers such as the presence of moisture or dust, bad electrical connections, or something more serious can cause the outlet to trip. Here are a few things homeowners can do to try and identify the problem before calling in an expert electrician.

Check if other outlets in the room are working.

If a GFCI outlet stopped working, it could cause issues with various outlets around the room it’s in, as multiple outlets may be connected to the same circuit. Understanding how the internal wiring is laid out in a home will make it easier to pinpoint the issue and determine if it’s a GFCI problem or something else that needs to be addressed by a professional.

Try testing a plug-in appliance to see if the issue persists in just one outlet, in outlets throughout the room, or if the issue expands throughout the entire home. If the outlets are only affected in the one room, there’s a good chance the GFCI outlet causes the problem. Be sure also to try testing multiple appliances to ensure that it is, in fact, an issue with the GFCI outlet not working and not an issue with the appliance itself.

Each GFCI outlet has a test and reset button, often labeled black for the test button and red for reset. These buttons can test the power running through the GFCI circuit and reset the outlets.

To properly test and reset the GFCI, unplug all appliances sharing the same circuit as the GFCI and then press the reset button on the GFCI outlet. If you hear a click once the button is pressed, try plugging in the appliances, as the outlet should be functioning again.

However, if the outlet continues to trip once it’s been reset, it may be getting overloaded by the number of appliances plugged into it around the room. To test if it’s the number of devices being plugged in, use a process of elimination to figure out which appliance is causing the issue by plugging in one appliance at a time until the GFCI outlet trips again.

Use a circuit tester to see if power is coming through.

In most newer homes today, updated GFCI outlets have a self-testing feature in which green and red LED indicators show whether an outlet is operating correctly or if it is faulty and needs to be replaced. Many homeowners will find that they have older GFCI outlets installed that need to be manually tested. Luckily, testing outlets can be an inexpensive task with life-saving benefits.

To manually test GFCI outlets, use a circuit breaker finder to check if an outlet is receiving any power or if it’s dead and needs to be replaced. Circuit breaker finders are tools that can read and display how strong of an electrical current each outlet is receiving and can determine if an outlet is functioning properly. Test all nearby outlets to see if just one outlet is being affected or if the entire room’s power is being affected.

Look for any tripped breakers.

A GFCI outlet won’t work if a breaker has tripped or if a fuse has blown. Check the main electrical panel to see if a blown fuse causes the issue and if so, replace the fuse and reset the GFCI outlet. Otherwise, check to see if the breaker for the corresponding room has tripped.

To determine if a breaker has tripped, look at the buttons inside the breaker box. The breaker switch should either be flipped to “off” or “on. However, if a switch is located in the middle position, that means it has tripped and needs to be reset. To reset it, first flip it to the “off” position, then switch it to the “on” position. Be sure to reset the GFCI outlet as well. If the breaker trips again after this fix, the issue could be a short circuit which can be dangerous and should be addressed by a licensed specialist.

If there’s moisture, try drying the outlet thoroughly with a hairdryer plugged into another outlet.

If a GFCI outlet senses that there is moisture present in or near the outlet, it will trip as a way to prevent electrocution. When it trips, it shuts off and stops electricity through the outlet as a safety measure. If moisture happens to be present in the outlet, it’s crucial to remove all traces of it before resetting the GFCI and attempting to plug anything into it.

To remove moisture, try plugging a hairdryer into a different outlet nearby and aim it at the GFCI outlet that has moisture present. Allow the hairdryer to thoroughly remove the moisture from the area before continuing, as any presence will cause the GFCI reset to be unsuccessful. Once the outlet has been completely dried, press the reset button and listen for the click noise, which indicates the outlet has been reset and power has been restored.

Check for bad electrical connections in the wiring.

Before checking the electrical connections in a GFCI outlet’s wiring, be sure to turn off the breaker connected to the outlet. After double-checking the breaker has been flipped to the “off” position, unscrew the faceplate from the outlet and remove the screws that hold the outlet in the wall. From there, the outlet can be pulled a little way out of the wall for easier access.

Call an electrician if the issue doesn’t seem to be a quick fix.

Sometimes, a seemingly faulty GFCI outlet can indicate a bigger problem that should be addressed by a professional who has a better understanding of the issue. Inexperienced homeowners should not try to perform extensive electrical repairs on their own, as this can pose a severe risk of injury, such as electrocution, as well as the increased risk of property damage.

If the issue seems to be more invasive than a quick DIY repair, contact a licensed electrician to have them take a look. Depending on location, licensed professionals can cost around $50 to $100 per hour or around $300 per project and have specialized, high-tech equipment that can help detect problems homeowners may not have known about. Professionals will be able to determine why the GFCI outlet isn’t working and can pinpoint and repair any additional electrical issues that may be present.

10 Mistakes Not to Make with a Home Generator

How to Replace a Circuit Breaker
Advertisement

Solved! What to Do If an Electrical Outlet Isn't Working

Solved! What to Do When Your Circuit Breaker Keeps Tripping