Solved! What Does It Mean to Say a House Is Settling?

Learn what it means for a house to settle normally and how to figure out if there is a bigger problem with the foundation. 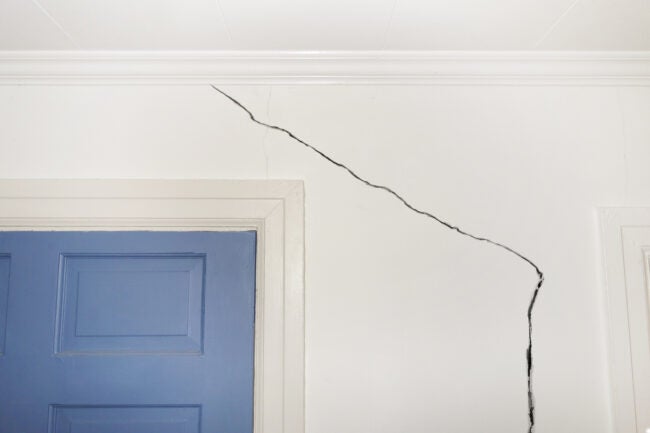 Q: I recently bought a newly built home, but I’ve noticed hairline cracks in the foundation over the last couple of months. A colleague said it was probably due to the house settling and that I shouldn’t worry too much. Is this really a normal thing that houses do? What does it mean to say a house is settling?

A: Your concern with seeing cracks in the foundation just after buying a new home is understandable. House settling is a normal process that all homes go through. It refers to different parts of a house, such as the foundation and framework, shifting over time. This can be due to climate, materials, or even the effect of the home’s weight on the soil. In most cases, a settling house won’t cause ongoing problems, though it is recommended to patch minor cracks and fill any air gaps caused by settling.

In some instances, a home may not settle correctly, leading to serious foundation issues. Watch out for large diagonal or horizontal cracks, sticking doors and windows, counters pulling away from walls, and damaged water lines. It’s always a good idea to have potential problems inspected by a professional if you aren’t sure about the extent or cause.

Need foundation repair?
A pro can help. Get free, no-commitment project estimates from foundation specialists near you.
Find a Pro

RELATED: How Much Does Foundation Repair Cost?

Why do houses settle? Typically, a new home naturally settles within about 1 to 2 months after being built as the wood and concrete lose moisture. However, a home can also settle over a longer period due to changes in climate, including heavy rain, humidity, and temperature changes. Similarly, a home can take time to compress the soil under the foundation, so you may experience normal home settling over the course of a 2-year period.

House settling is a normal process that shouldn’t cause significant issues, but it’s important to understand the differences between house settling vs. foundation problems. If your house-settling cracks run diagonally or horizontally through the foundation, then the home has not settled properly, and the settling may cause additional problems throughout the home. Loose soil rich in clay can lead to homes shifting and sinking. Uneven floors and discolored exterior walls can be a sign that the house is sinking. If there is flooding or improper drainage around the home, these factors can also cause the home to shift and sink, so it’s important to take action to resolve these issues immediately.

Factors inside and outside of the home can affect how much it settles.

Several interior and exterior factors can affect the degree to which a home settles and the amount of time it will take for the house to settle, including soil, materials, and climate.

Houses are heavy, so it shouldn’t come as a surprise that the weight of a home can compress the soil under the foundation, resulting in the house shifting or even sinking slightly. The degree to which a home compresses the soil depends on the house’s weight and the soil’s density and composition. If soil under the home is relatively loose or contains a lot of clay, expect the house to settle more than if the soil was tightly packed with little to no clay. Clay affects house settling because it expands and contracts under a home, shifting the foundation.

Wood and concrete are commonly used to build residential homes. After initial construction, the moisture in these materials begins to evaporate, which can cause a home to settle over its first month or two. This is one of the most typical reasons for a home to shift and settle, but it is also one of the least likely to cause serious house settling issues.

When the temperature changes from summer heat to winter cold, you can expect to hear house settling noises as the ground around the home freezes. In most cases, a home will shift and settle according to the normal yearly weather over the course of the first year. However, if the first winter season is relatively mild, it may continue to shift for up to 2 years before it finishes settling.

Heavy rain, snow, and/or poor drainage around a home can also cause it to shift in the loosened soil. Make sure drainage systems around the home redirect the flow of rain, meltwater, and other sources of moisture away from the foundation of the house to help mitigate this.

Normal house settling can cause minor cracks in drywall or hairline foundation cracks.

Normal house settling can result in minor cracks in the drywall or vertical hairline foundation cracks. While more of aesthetic problems, it’s still in your best interest to fix these issues when you spot them. Another symptom of normal home settling is the formation of air gaps between insulation and the house’s walls or siding. This makes heating and cooling more difficult, but these gaps can be filled with a spray foam or another suitable sealant.

Keep in mind that settling will not occur all at once, so give your home enough time to properly settle before trying to fix drywall cracks. Otherwise, you may end up repairing the same crack numerous times over the year. When you spot hairline foundation cracks, consider hiring a professional foundation expert to repair the problem. Of course, DIYers might want to learn how to repair cracks in drywall from house settling so they can resolve the issue on their own.

In some cases, a home won’t settle normally or it may shift due to flooding, frost heaves, and improper drainage. This can cause the home to shift in such a way that the foundation cracks diagonally or even horizontally, which can lead to severe foundational damage. Diagonal or horizontal cracks in the foundation or drywall are clear signs that there’s a problem.

An improperly settling house can also cause doors or windows to stick as the foundation and framework shift, pulling window and door frames out of alignment. Similarly, cupboards, cabinets, counters, and baseboards may pull away from walls and twist out of alignment. Severe settling issues can even lead to the water and gas lines that run through the foundation cracking or leaking if steps are not taken to resolve the problem.

If left unfixed, the foundation can continue to shift until the base of the home no longer properly supports the top of the structure, potentially resulting in collapse. Don’t wait until this house settling problem becomes unfixable. Contact a foundation repair company to assess and repair your home’s foundation.

Foundation problems?
Maybe it's time to call in the pros. Get free, no-commitment project estimates from foundation repair services near you.
Find a Pro

Foundation problems caused by abnormal settling can have a domino effect, damaging other parts of a house.

The foundation supports the framework of the rest of the house, so when the base of the structure shifts irregularly from improper settling, it can result in significant damage and cause a chain reaction throughout the home. Significant foundation cracks indicate that forces being exerted on the home are literally tearing it apart as parts of the house are pulled in different directions.

Watch out for signs of an improperly settling house, so you can take action before they have time to spread and wreak havoc throughout the home. Take a look at the following list of common problems and signs that a house is settling improperly.

Whether a home was built this month or a decade ago, it’s important to immediately address signs of house settling.

Generally, a newly constructed home should take a couple of months for moisture in the concrete and wood to evaporate. It can take another year or two for the home to finish settling due to weather and temperature changes. Heavy rain, improper drainage, frost heaves, and flooding can impact the house’s stability—even a decade after construction—so always be on the lookout for signs of home settling.

Take action as soon as possible to mitigate the risk to your foundation by fixing minor cracks, sealing air pockets, or hiring a foundation repair pro. Before purchasing a new home, speak with the builder to discuss a plan for minor and major damages that may occur due to house settling. Also, take some time to ensure the home’s drainage system redirects water away from the foundation to reduce erosion and prevent the house from shifting unnecessarily.

RELATED: Solved! Why is There a Crack in the Basement Wall, and What Do I Do About It?

Just Making These 8 Phone Calls Can Save You Money

Do These 12 Things Before a Home Appraisal