6 Signs of Structural Damage You Should Never Ignore

Here’s how to know whether a problem in the home is cosmetic, or if it signals something significant has gone wrong. 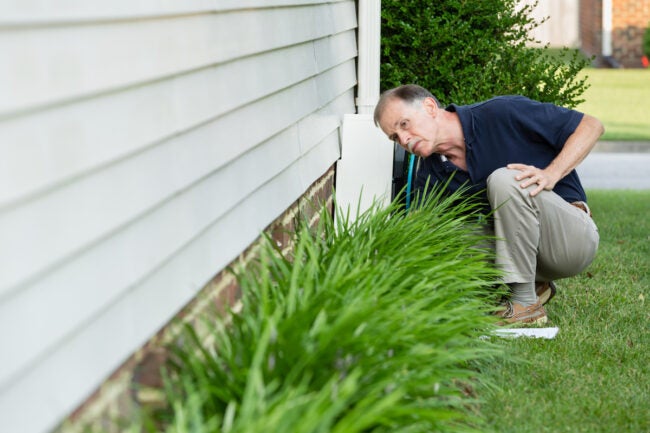 Owning a home comes with some inevitable responsibilities, including maintaining and repairing problems before they worsen. There are, perhaps, no issues as problematic for homeowners as structural problems—issues that affect the weight-bearing skeleton of the home—because, in some cases, these problems can lead to expensive repairs.

Ahead, find out why some home problems, which may seem minor at the onset, could be a sign of structural damage that requires prompt attention. We consulted Michael Russell, a Certified Home Inspector for API Home Inspections in Wichita, Kansas, and asked him to weigh in on a few signs that might indicate a home has a structural problem.

During installation, a builder levels and shims a door to ensure it opens and closes easily. If a door was once easy to open and close but suddenly won’t shut, it could signify a problem. When Russell inspects a home and finds a sticking door, he looks for additional indications of a structural problem, such as “diagonal crack in walls or unlevel floors in the area.” However, not all sticking doors indicate a structural problem: “It could be just a poorly fit door,” Russell says.

RELATED: 8 Dangerous Secrets Your Home May Be Hiding

Glass window panes are one of a home’s weakest elements and are prone to breaking on impact from misthrown balls or heavy hail. In some situations, cracked windows could mean that there’s a more significant problem with the home’s structure. Called “pressure cracks,” the fissures may first appear as a single crack running from side to side on a window.

According to Russell, if a foundation has a structural problem, basement windows are more likely to crack than windows in other parts of the house. Fortunately, he says, most cracked windows are not signs of structural damage.

Innocuous mud tubes may go unnoticed by a homeowner when they first appear on the exterior of a foundation, running in meandering paths from the soil to the sill plate. They’re anything but harmless, though—they’re protective tubes built by subterranean termites that keep them from being exposed to the sun as they travel from the earth into your home, munching on a home’s wood elements along the way.

Russell keeps an eye out for mud tubes during a house inspection, but he doesn’t perform in-depth checks that include removing drywall to see if there’s hidden damage to the structure. If homeowners discover mud tubes, a call to a certified termite inspector is in order.

Floors should feel solid underfoot. In some cases, bouncy floors may be related to undersized floor joists or trusses. If the floor just started feeling bouncy after years of feeling solid, however, something has changed with the floor’s structure. This could be a damaged joist, delaminated subflooring, or even a foundation problem.

Russell says most of the bouncy floors he finds in homes are on crawlspace foundations. When he notices an overly spongy floor, he checks the crawlspace to see if the beams are adequately supported.

Concrete is exceptionally rigid, so the natural settling of a house often results in a few cracks, especially in the first few years after construction. Vertical hairline cracks are “less concerning than other types of cracks,” explains Russell. These are typically normal and rarely indicate a problem.

However, if the cracks are large, especially if “they’re wider at one end than the other, or if they run diagonally,” the inspector says, it could indicate a structural problem. Foundation repairs are often costly and they won’t fix themselves. The longer they’re put off, the more expensive and extensive they’ll be to repair—in other words, address foundation concerns promptly.

Most ceilings in modern homes are covered with drywall panels, and if the house settles slightly, hairline cracks may appear around the perimeter of the room, where the panels join. These cracks are often cosmetic issues, but when ceiling cracks “are wide, or when a ceiling crack transitions to a wall crack” it may indicate a structural problem, Russell said.

A crack that appears between a ceiling and a non-load-bearing wall in a home with a truss roof may be the result of “truss uplift.” While this type of crack is unsightly, it usually isn’t indicative of a structural problem. It can be cosmetically repaired by a contractor by attaching the ceiling drywall panels to the top of the wall structure rather than to the trusses.

RELATED: 7 Ticking Time Bombs in Your House—and What to Do Next

Solved! What Does It Mean to Say a House Is Settling?

How Much Does Foundation Crack Repair Cost?

This Is How Long Each of Your Major Appliances Should Last