The Dos and Don’ts of Foundation Planting

Are you unsure about what to plant around your “nude” new house or determined to improve your ho-hum home landscaping? Learn foundation planting from the ground up! 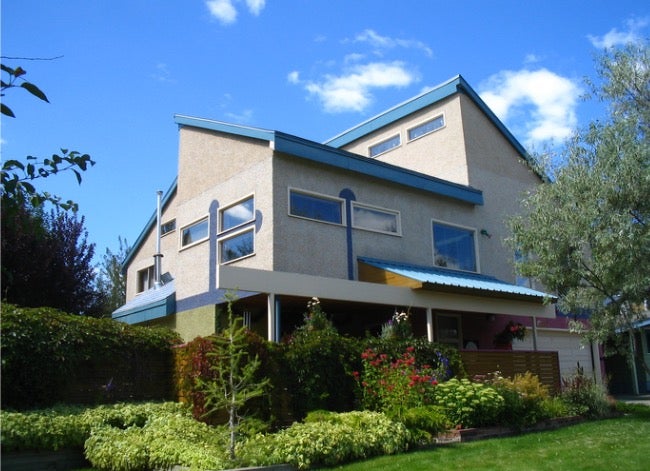 Foundation planting—placing plants near and along the edges of a home’s walls and foundation—helps blur the line between the building’s solid structure and its setting. When planning a foundation planting, keep in mind that its purpose is to frame the attractive aspects of your home rather than—as in previous eras—conceal that building’s naked underpinnings. But, if necessary, it can do both!

That surround of trees, shrubs, and perennials allows the house to nestle into the landscape rather than looking as if it simply was plunked down there. When done well, foundation planting also can contribute to an increase in the value of your property by more than 10 percent. Without it, your house just will look as bare as the day it was “born.”

DON’T plant trees and shrubs in areas that could interfere with utility lines or air-conditioning units.

Before you begin your planning, call 811 to determine the location of any underground utility lines on your property, so you can avoid those areas. When setting out trees near power lines, limit the choices to those that don’t surpass 25 feet when fully mature. Otherwise, you or your local power company might need to do some drastic pruning later.

Although it can be a good idea to conceal unattractive air-conditioning units behind shrubbery, you’ll need to allow those units 2 feet of clearance on all sides and 5 feet above so they can continue doing their jobs properly.

RELATED: Solved! When to Plant Hostas

DO give your plants enough space to grow properly without harming your house.

Trees or shrubs planted too close to a house can send down roots that harm the foundations or water and sewer pipes, or exclude breezes and cause mold and mildew on the siding. Plus, their mulch could invite termites.

Plant any trees or bushes that will reach 6 feet or more at maturity so that when fully grown, their foliage still will remain at least 5 feet away from the house, or 3 feet for smaller shrubs. To prevent an invasion of termites, keep wood mulch 1 foot away from the building, using a mulch of crushed gravel in the intervening space.

Finally, make sure that the ground is highest where it meets the house, sloping downward about 6 inches for every 10 feet away from the wall, so that excess rainwater drains into the lawn rather than into your home’s foundation.

DO choose plants that are proportional to your house and don’t block its windows.

A large tree towering over a bungalow will make the building look even smaller than it is by comparison, just as a mansion fronted only by trees half its size will appear to loom larger than it should. In general, you want trees growing near a house to reach no higher than just below the roofline of the structure. Place the tallest ones at the corners of the building, positioned so that they extend beyond those corners, to soften them.

Shrubs directly in front of the dwelling should mature at a height low enough that they will never block windows, while taller specimens should be set far enough out from the house that their branches won’t run into the gutters later.

DO remember design basics without allowing them to become rigorous requirements.

Usually, your planting bed should measure about 6 to 8 feet deep (from the building to the outer edge of the bed) and extend at least a little beyond the length of the structure. Keep in mind, however, that trees, shrubs, and perennials look more natural if allowed to stand about in odd-numbered triangular groups rather than being forced to marshal in obsessively straight ranks. Rigidly formal plantings generally are appropriate only for highly formal buildings.

A paved path from the driveway to the house, if you require one, should measure a comfortable 4½ feet across. Avoid island beds—those dropped down in the middle of the lawn without  connecting to anything—as they can give your landscaping a spotty and disconnected look.

RELATED: The 14 Best Plants for Under Trees

Be sure to check all potential plants’ preferences before you purchase them. Roses, for example, generally require at least 6 hours of sun per day to flower well, while some hydrangeas or camellias can bloom quite happily in partial or even full shade. So, before going shopping, you should take note of how many hours of sunlight your beds receive on a clear day.

If that number is less than 6 hours, opt for plants that tolerate partial shade; for 2 hours or less of sunlight per day, full-shade plants will do best. And there’s always the possibility that, if too closely planted, your new trees or shrubs might eventually shade each other.

DO consider symmetry around your front door.

Foundation planting is meant to draw attention to the house rather than to itself—and especially to the home’s entry. So landscapers often position an eye-catching specimen tree such as crabapple or dogwood not far from the front door.

Symmetry can be formal, meaning that the shrub or potted plant on the left side of your entrance is mirrored by another of precisely equal size and shape on the right. But, for a more informal look, just consider the visual “weight” of the plantings.

For example, if you have a 10-foot red-leafed Japanese maple situated in a corner to the left of your door, a single tiny green shrub to the right could throw off the balance. So you might want to place a couple medium-size bushes there instead to equal the visual impact of the tree.

DO consider when repetition can be a good thing.

Granted, repetition is boring when it consists of a half dozen of the same shrub marching in never-varying single file across the front of a house. It can be striking, however, when you repeat shapes or colors instead. For example, harking back to the previous illustration, a red-flowered bush to the right of your front door could also bring out the ruddy hues of that Japanese maple on the left.

An evergreen with a pointed tip might mimic those pointy-topped gable windows of which you are so proud. Use the same ground-cover plant under all the disparate shrubs in your bed to unify your planting without subtracting from those shrubs’ individuality.

RELATED: The Dos and Don’ts of Landscaping Around Trees

DON’T forget about all four seasons.

If all of your foundation shrubs are deciduous—that is, they drop their leaves in autumn—your design will look bare and twiggy during winter. If, on the other hand, you plant all evergreens, your landscape could appear gloomy and boring during what should be the blooming-est spring and summer months.

It’s best, therefore, to incorporate both deciduous and evergreen plants as well as a few perennials. Monrovia suggests that you aim for one-half evergreens, one-fourth flowering shrubs, and one-fourth perennial plants. Providing a dark backdrop to make the flowers “pop” during their season, evergreens then can take center stage themselves during the cold months.

The Dos and Don'ts of Planting Ground Cover
Advertisement

How To: Split Hostas for More (Free!) Landscaping Foliage

The Dos and Don’ts of Mulching the Garden

The Dos and Don'ts of Cleaning Patio Furniture