Understand the pros and cons of these two popular foundation types so you can choose what’s best for your new home construction. 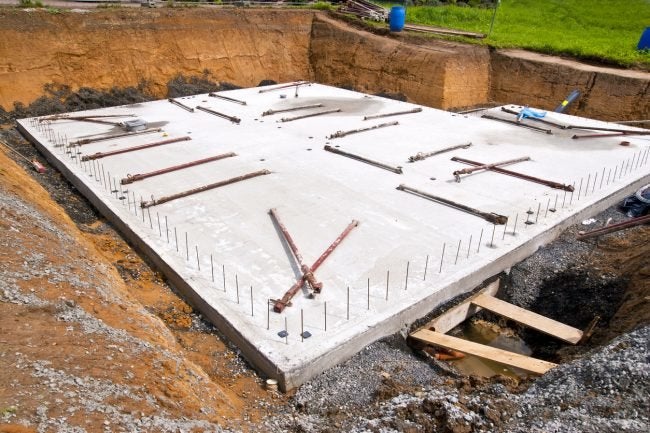 No matter what the architectural style, a house is only as good as its foundation, the lowest load-bearing aspect of the building that supports the floors, walls, basically everything that comprises the structure. There are three basic types of foundations: a full basement, slab, and crawl space (the latter two being most popular in new home construction).

As the term implies, a slab foundation is a thick concrete slab on top of which a house is built. A crawl space foundation features exterior concrete walls that elevate the bottom of the house 18 inches or higher above grade (ground level), providing an accessible area to reach plumbing and wiring should it need maintenance in the future. Crawl space foundations usually require additional support walls beneath the interior of the house as well.

While both foundation types are used extensively, each one is best suited to specific situations and conditions. Keep reading to find out the seven biggest differences between two popular foundation types—slab vs. crawl space—so you can make the best decision when you have a new home built.

Slab foundations with shallow footings (steel-reinforced concrete pads that support a foundation) are limited to flat or nearly flat lots where only minimum excavation is required to pour the concrete slab. When a lot is sloped, however, a slab would require extensive excavation because the high side of the lot would have to be dug out and made level with the low side. Crawlspace foundations are a better choice for slopes because less excavation is necessary (digging only for walls, not for an entire slab). For example, on the low side of the lot, a two-foot deep trench might be needed, while on the high side, a four- or five-foot trench might be necessary, but the trench need only be two feet wide (standard foundation wall trench width).

Slab foundations are not suitable in cold regions.

When soil freezes (due to its moisture contents), it can expand and heave, putting pressure on a foundation, which can cause it to crack or shift. In order to stabilize any foundation, its footings must lie beneath the frost level: the depth to which the ground will freeze in any given region. In southern states like Florida, the ground rarely freezes, and if it does, it’s only to a depth of an inch or two, so a slab foundation with typical footings 24 inches below grade is sufficient for stability. In a state such as Kansas, however, where the frost level is 34 inches below grade, a crawl space foundation is more suitable, and its support walls will have footings constructed below the 34-inch mark to stabilize the foundation.

In regions that see a lot of rain, the area within a crawl space can retain a measure of water, creating a moist, soggy environment that leads to mold growth and increased the risk of wood rot in floor joists and subflooring. Being constructed from solid concrete, slab foundations are impervious to moisture. Additionally, during construction, a vapor barrier (typically polyethylene or polyolefin sheeting) is placed beneath the slab to prevent the concrete from absorbing ground moisture and becoming damp. This is important because while concrete can’t be damaged by water, without a barrier it can absorb and transfer moisture through the slab, which could then affect the flooring above. Vapor barriers make slab foundations a better option in damp climates where the ground is often saturated.

The exception is if the house lies in a flood plain. In that case, a home on slab foundation has a greater chance of taking on water when floodwaters rise than a house that is elevated at least 18 inches on a crawl space. Fortunately, most communities enact strict building regulations that do not allow the construction of homes within designated flood plains.

Slabs are less expensive to build.

While the final cost of any foundation depends on the size and complexity of the home’s floor plan and the average cost of construction in a specific community, an average slab foundation runs approximately $7,500 to $12,000, while a crawl space foundation will cost approximately $8,000 to $21,000. In addition to higher excavation costs for crawl space walls, additional digging is required in order to bury water and sewer lines below the frost level. In a slab foundation, plumbing is located within the slab itself, so less work is required during installation and fewer labor costs are incurred.

When constructed correctly, both types of foundation can be expected to last 50 years or more, but crawl space foundations tend to require more maintenance to prevent mold and insect infestations. Crawl space walls are also more likely to require structural repairs, especially in regions where the soil is high in clay content. (Clay-type soil swells when it becomes saturated and puts lateral pressure on foundation walls, which can lead to cracks and foundation shifts.)

Slabs are solid and thick (24 inches compared to eight-inch-thick crawl space walls), making slabs stronger than crawl spaces. In addition, since slab foundations are not built in regions where the soil freezes, owners of homes on slabs have very little to worry about when it comes to soil movement. However, homeowners with slabs should not plant trees with invasive root systems, such as willows, less than 50 feet away from the foundation. Planted too close to the house, large roots could easily develop under the slab and push it upward, which can cause a slab to crack.

RELATED: Here’s When to Worry About a Foundation Crack

Also, though fairly rare, a plumbing pipe may spring a leak in a slab foundation. A portion of the slab might then have to be removed to fix the leak. Other options are available, however, including using an epoxy coating on the leaky portion of the pipe from within to seal it, or completely rerouting the pipe around the outside exterior of the home.

Crawl space foundations must be vented to reduce moisture accumulation, but that ventilation also permits frigid air to blow beneath the house. Cold temperatures in a crawl space can transfer through the floor joists and subflooring to the living areas above, so owners of houses on crawl space foundations will spend more to keep their homes comfortable. To combat this problem, most building codes require insulation to be installed on the interior of foundation walls and also between the floor joists. While this reduces cold transfer, it doesn’t completely eliminate it, and in cold regions, plumbing that lies within crawl spaces may also have to be insulated or require the application of electrical heat tape to keep pipes from freezing.

It’s difficult to change the floor plan of a house with a slab foundation. In a slab home, plumbing is embedded in the concrete itself, so changing its configuration requires breaking out portions of the slab, which can compromise the structural integrity of the entire slab. In a home on a crawl space, however, the kitchen and bathroom location can be moved from one side of the house to the other, and the plumbing can be reconfigured within the crawl space below.

How to Choose the Best Moving Company for Your Needs—10 Crucial C...

13 Maintenance Mistakes That Will Cost You the Most Money

10 Ways to Weather-Proof Your Garden

8 Plants You Can Grow Without Soil

50 Products for Quick Fixes Around the House