When a Chimney Tilts, A Foundation Problem Lurks Below 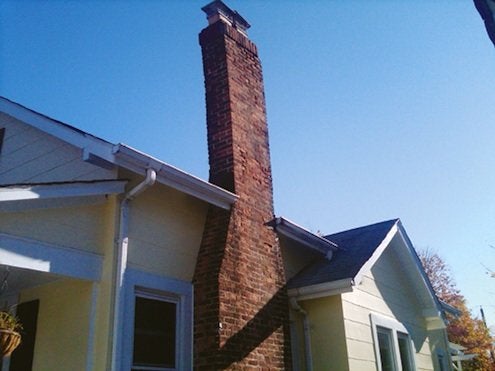 It’s not something you really want to acknowledge. You tell yourself it’s an optical illusion, or clutch to the consoling thought that, hey, the tower in Pisa has leaned for centuries.

But a tilting chimney is a serious home problem that should be dealt with as soon as possible. The bricks could fall on someone’s head or crash on your roof. Water and bugs could get in the gap where the chimney has pulled away from the siding. The chimney liner may even be cracked, leaking combustible gases into the home. And since the chimney is probably connected to the foundation, there could be problems there, too.

The good news is that with today’s foundation repair methods, it may be possible to move your chimney into its original plumb position without incurring the high cost and disruption of demolition and rebuilding.

How to Tell If a Chimney Is Tilted

Look at the joint between the house siding and an exterior chimney. If a gap has opened up, it’s a pretty sure sign the chimney has begun to lean. Previous owners may have filled the gap with mortar, caulk, or foam insulation, but these measures only mask the problem. You may also see metal straps that have been used to fasten the chimney in place.

If your chimney runs through the interior of the house, look in the attic to see if it is centered in its framed opening. If it’s pressing against the opening to one side or another, that means it is leaning.

Leaks due to dislodged flashing are another sign that a chimney has settled. You may also use a long level to check whether the chimney is plumb (vertical in two planes). Alternatively, check the horizontal mortar joints for level.

Be aware, however, that some chimneys are designed to “tilt”. If the fireplace is not centered, the builder may have chosen to offset the brick courses so the chimney could exit at the roof ridge, giving the house a more symmetrical appearance. In some cases, the offset is slight and it looks like tilting, but as long as the horizontal mortar joints are level, you can rest assured that the chimney was built that way.

Causes of a Tilting Chimney

Masonry chimneys weigh many tons, and that weight is concentrated on a small area. So a chimney needs to be built on a concrete footing, sometimes called a chimney pad, in order to keep from sinking. (A chimney may be attached to the house for stability as well, but that’s not what’s holding it up.) The footing may be poured at the same time as the foundation or afterwards, as would be the case if the chimney were an add-on.

A number of things can cause a footing to fail and undermine a chimney. They include:

Helical piers look a little like giant screws and can be installed with hydraulic rotary drive equipment. The piers are driven deep under your chimney until they reach a firm, load-bearing soil strata. Brackets are then placed on the piers and slipped under the chimney footing.

Once in place, hydraulic jacks are used to slowly lift the chimney back into its original position. The bracket is then secured to the pier and the jacks are removed. Because helical piers do not require excavation and bring up nothing in the way of spoils (stone and soil), your yard is virtually undisturbed.

The Best Foundation Repair Companies of 2022

16 Problems a Power Outage Can Cause at Home