Solved! How Long Does Gas Last?

Does gasoline go bad? How long can you store gas in cans? Learn how to recognize when it is past its prime, and how to dispose of it safely. 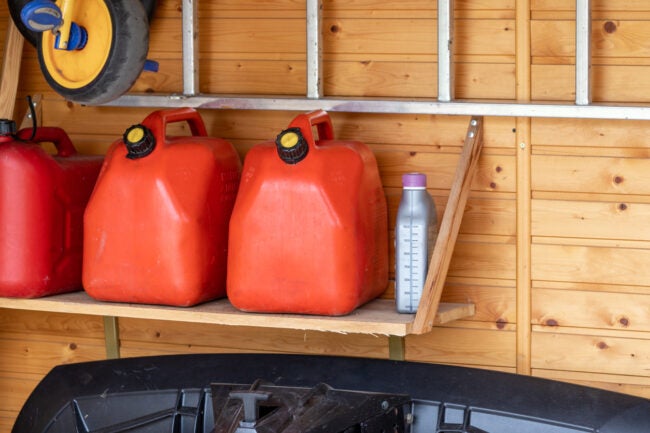 Q: I have a gas lawn mower and a gas generator, and I worry that the gas in those tanks has been in there too long. Does gas expire? And how long is gas good for if it’s in a gas can?

You’re wise to wonder about the shelf life of stored gasoline, because once gas loses its engine-igniting ability it could damage fuel system components. Indeed, before using any stored gas in a mower, tractor, or other machinery, first check the fuel storage time limits laid out in the manufacturer’s guidelines for that piece of equipment. Filling engines with gas that has been in storage for longer than that amount of time indicated could void the product warranty. Does gasoline go bad? Yes, it can. But “old” gas is not necessarily “bad” gas—in other words, old isn’t the same as contaminated. Read on to learn how long gas lasts in a container, along with tips on spotting and disposing of stale gas.

Properly stored gasoline can last up to half a year.

Though it naturally degrades and loses combustibility over time due to oxidation and evaporation of its volatile compounds, gasoline usually lasts 3 to 6 months when properly stored in a tightly sealed gas can or metal tank that’s within the capacity limits recommended by your local fire department (usually no more than 5 gallons). Factors that can shorten or lengthen gasoline’s life include how pure the gas is and whether it has been treated with a fuel stabilizer.

Ethanol-blended gas lasts up to 3 months.

According to the U.S. Energy Information Administration, most gasoline sold in the U.S. is E10 gas made of 90 percent petroleum-based gas and 10 percent ethanol (ethyl alcohol). The shelf life of gas that is ethanol-blended is usually about 3 months maximum because ethanol oxidizes pretty quickly. Because ethanol is hydrophilic (aka, water-loving), it will also readily absorb any water or humidity in a sealed container resulting from condensation, causing both moisture contamination of the fuel and the eventual separation of the fuel into distinct gas and ethanol layers. Generally, the higher the ethanol content in the gas, the shorter its shelf life, so E15 (15 percent ethanol content), E20 (20 percent ethanol), or E85 (85 percent ethanol) gas will expire sooner than E10 gas will.

Petroleum-based gasoline that does not contain ethanol will still succumb to oxidation and volatile compound evaporation in a sealed container or tank, but these processes usually occur more slowly in pure gasoline. Expect non-ethanol gas to last at least 6 months if it’s properly stored. Because pure gasoline is hydrophobic (aka, water-hating), it doesn’t absorb water or humidity as ethanol-blended gas does, which means that you won’t have the moisture contamination and fuel-separation issues you have when storing ethanol-blended gas.

Fuel-stabilized gasoline keeps for 1 to 3 years.

Fuel stabilizers, of which STA-BIL is probably the best known, are petroleum-based additives you can mix in with gasoline before storing it. These stabilizers slow oxidation and volatile compound evaporation, and extend the shelf life of the gas. That may lead you to wonder, “How long does gas last with a stabilizer versus without a stabilizer?” Here’s the deal: A stabilizer can lengthen gasoline’s shelf life to as long as 1 to 3 years, depending on which product you use. The other important thing to know about fuel stabilizers is that they work best when they’re added to new gasoline. They can’t slow the degradation of old gasoline, and they can’t make contaminated gas work effectively.

RELATED: 10 Things Homeowners Will Pay More for Due to Rising Gas Prices

Learn how to tell if gas is bad or contaminated by comparing it to a sample of freshly pumped gas.

The easiest way to assess the condition of gas is to pour a small amount of your stored gas and freshly pumped gas of the same type into two clear glass vessels and do a side-by-side comparison. If the gasoline smells sour or is only slightly darker than the fresh gas it’s probably just old and has probably lost efficacy, but isn’t contaminated.

If you observe separate layers of gas and ethanol in an ethanol-blended gas (generally, the gas layer will be darker and positioned above the lighter ethanol layer if the fuel has separated), or if the gas is significantly discolored (i.e., it’s the color of milk chocolate or rust) or contains sediment or sludge, it has been contaminated by moisture or the solid by-products of oxidation, respectively.

Contaminated gas should never be used to power equipment or vehicles; it can promote corrosion or leave sludge or varnish deposits (a thin, transparent brown or orange film) on fuel system components that can irreparably damage them. Dispose of contaminated gasoline at the earliest opportunity because, poor combustibility aside, both the gas and the vapors it emits are still flammable and could cause a fire or explosion if the storage container were to become damaged over time and the gas were to leak into its surroundings.

RELATED: How to Get Rid of Gasoline Smell

Old gas can still be used if it’s mixed with new fuel.

Old gas is still usable if it’s combined with fresh gasoline, though your engine might sputter—or may not start right away—because the fuel mixture’s combustibility is lower. To use old gas in gas-powered lawn equipment, fill the fuel tank with one-part fresh gas to one-part old gas. Starting a car will require more horsepower, so if you recently filled the gas tank three-quarters of the way with fresh gas, top it off with old gas and then try starting the car.

The gasoline lifespan for fuel in a car’s tank is about 6 months.

Whether you’re returning home from a long vacation or pulling the cover off of a car that’s been in long-term storage, you’re right to wonder how long gas can sit in the car. The answer is thankfully simple, as gasoline lasts about as long in a gas tank as long as it does in a gas can. Pure gasoline in a car’s gas tank should last for about 6 months, ethanol gas for up to 3 months, and fuel-stabilized gas for 1 to 3 years. Regardless of usage, these lifespans are still generally true for the gas tanks of small engines that run on gasoline, such as those in lawn mowers and some generators.

The real challenge with tracking the age of fuel in a gas tank is that it’s not freshly produced at the gas station, meaning it could be as much as a month old by the time it’s pumped into your car. If the gas in a vehicle’s tank is definitely stale, you can siphon the gas for proper disposal.

Dispose of gas at government-approved sites.

Never dispose of gasoline in trash cans, drains, sewers, lakes or streams, or on the ground—it’s highly flammable and can contaminate local water sources. To safely dispose of old or contaminated gas, contact your city waste or fire department for the approved disposal gasoline site. When you’ve identified a suitable site, ensure that the storage container is sealed, then stash it in a cooler or large bin to prevent gasoline leaks as it’s being transported. Empty the contents of your gas container into the waste receptacle at the disposal site so you can reuse the container in the future.

15 Safety Essentials That Most Homes Are Missing