How to Dispose of a Couch Properly

You’ve got several options for getting rid of that old sofa, and most of them don't involve a landfill. 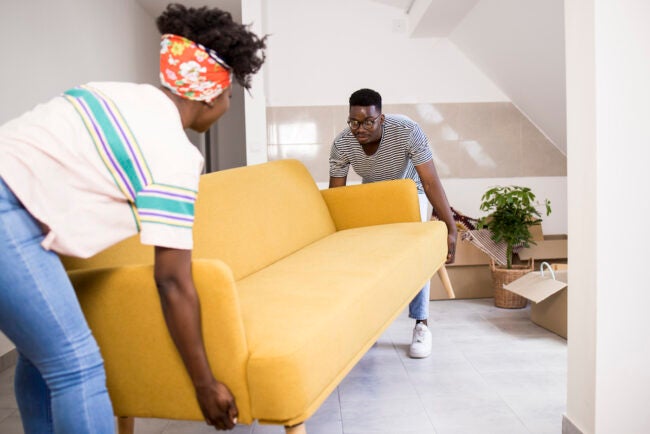 Q: I just bought a new couch, and it’s going to be delivered next week. My old couch has certainly seen better days, but I’m not sure how to dispose of it. Could you please help me understand how to get rid of a couch?

A: Purchasing a new couch to update a worn-out model can have a dramatic impact on the look of your living space. However, you’ll need space for your new furniture and fast, so you’re not alone in needing a crash course on how to get rid of a couch. When possible, avoid tossing an old couch in a landfill. According to the EPA, nearly 10 million tons of furniture ended up in landfills in 2018. Choose from alternative couch disposal options, such as those shared below, to reduce landfill waste and protect our environment.

If the couch is in good condition, donate it.

Rather than disposing of an old couch, consider donating it! If your sofa is still in good condition, it could greatly benefit a household in need of one. You might be able to give your couch to someone you know, such as a friend or family member. Ask around and see if anyone is looking to replace their couch or needs an extra couch for a movie room or game room.

If you’d like to make a community impact, look for a local charity that accepts furniture and confirm that they will be able to take your couch. You may even be able to arrange for it to be picked up from your home in some cases. When you donate your couch to charity, you can also claim it as a deduction when you file your taxes.

When thinking about what to do with an old couch, first consider whether it’s still in usable condition. If you’re only looking for a new couch for aesthetic reasons, look for ways to upcycle your current couch. For example, would adding a slipcover or some new pillows to your existing sofa make it more comfortable or cohesive in your space?

If you’re up for a bigger DIY project, consider reupholstering your existing couch. This could be a good option if you still find your sofa comfortable but are tired of the fabric, or if it has simply seen better days. However, if you don’t think you’re equipped for couch reupholstery, consider getting a quote from a professional—it still might cost less than buying a brand-new couch.

Some other ways to upcycle a couch include painting wood accents, upgrading the legs, and adding nailhead trim.

Another idea for how to get rid of old furniture that’s in good condition is to sell it locally. Not only is this one of the cheapest ways to get rid of an old couch, but you may even make some money on the deal and end up ahead. There are a few different options you can try if you decide to sell your couch. The first is to try to sell it in person at a yard or garage sale.

You could also try selling your couch online through Facebook Marketplace, local online yard sale groups, or Craigslist. When selling online, be on the lookout for scammers and stay away from anything that sounds phishy.

Before arranging to sell it, take some time to clean your couch. Not only will this help you maximize its profit potential, but you’ll be providing a ready-to-use piece of furniture to the new owner.

If your sofa is in unusable condition and requires major repairs, it may just be time to let it go. While dumping a couch in a dumpster may be an option where you live, it can be difficult. Hoisting the couch up and/or breaking it down is laborious, and you might need to find a large enough vehicle to transport the couch yourself. Moreover, placing upholstered furniture in dumpsters is often prohibited, and you could be subject to fines for doing so.

Instead of doing all the heavy lifting yourself, contact a junk removal company to haul away old furniture in your home, including your sofa. Not only will a furniture removal service take care of old couch removal for you, but they should also break the couch down and dispose of the different components in a responsible manner.

One downside of using a professional junk removal company is that you must pay for the services they provide. While the cost of junk removal can vary, expect to spend at least $50 to $75. However, the national average for junk removal is $233, so you may end up spending more.

RELATED: How to Turn Donated Goods Into a Bigger Tax Refund

Take it to a local scrap yard or recycling center.

Before searching for “where can I throw away a couch” online, first look for suitable ways to recycle furniture—ideally the whole thing, but, if not, as much of it as is possible. While you likely won’t be able to recycle the entire couch, you can take it apart and recycle some of its components.

After you’ve taken apart your old couch, you can recycle the fabric and cushions with other textiles. Take any wooden pieces to your local recycling center. The metal components can also likely be taken to the recycling center or a local scrap yard.

Give it away curbside.

If you live on a road that gets a fair amount of traffic and are looking for how to get rid of a couch for free, one option is to place your couch on the curb with a “free” sign. Someone driving by may be interested and take it—and all the hassle of figuring out how to dispose of a couch—off of your hands.

However, before you put your used couch out on the curb, make sure that your city or HOA does not have any rules or laws prohibiting it. You don’t want to face a fine for inadvertently breaking a rule.

Trade in an old couch when you buy a new one.

Trading in an old car when you purchase a new one is a standard process that nobody thinks twice about. However, did you know that you may also be able to trade in your old couch when you buy a new one? Some retailers offer couch trade-in or buyback programs that give eligible customers a discount towards new furniture when they bring in their old furniture.

Most companies running these programs will only let you trade in one of their products, so keep that in mind as you’re shopping around. Research the manufacturer of your current sofa and see if they offer a couch buyback or trade-in program. If they do, that may simplify your decision about where to purchase a new couch.

How to Dispose of a Microwave Properly

How to Dispose of Tires Properly

How to Dispose of a Refrigerator Properly

How to Dispose of Knives Properly: 3 Safe Solutions