How to Put on a Duvet Cover: 2 Stress-Free Methods

You’ll sleep easy after learning these simple tips and tricks. 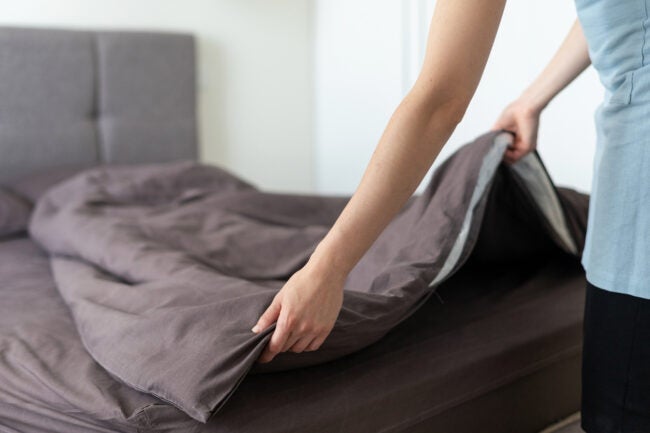 When it comes to choosing your bedding, there are plenty of options, from quilts to comforters. Duvet covers can also be a good option for the top layer of your bedding, but many people experience some confusion when trying to figure out how to put on a duvet cover.

A duvet cover is a cover for a duvet insert or comforter and is aesthetically pleasing as well as practical. The best duvet covers keep out dust, protect the insert, have a fluffy and luxurious look, and come in various patterns and colors to complement your bedroom. But, there’s a little skill involved when it comes to putting on a duvet cover. We’ll cover two easy methods on how to put on a duvet cover to make swapping your bedding a breeze.

How to Put on a Duvet Cover: California Roll Method

STEP 1: Turn the duvet cover inside out.

Flip the duvet cover inside out and lay the cover flat on the bed with the opening of the cover at the foot of the bed.

STEP 2: Place the duvet or comforter on top of the cover.

Lay the duvet insert or comforter on top of the duvet cover and make sure the corners of the insert and cover match up. If the cover and insert can be tied together at the corners, do that now.

STEP 3: Roll the duvet and cover together.

Once the corners are matched up, it’s time to roll. Start at the end opposite the duvet cover opening, and tightly roll the cover and duvet together. Take your time to make sure you roll the bedding tightly. Like its nickname, the roll should look like a burrito.

STEP 4: Stuff the remaining duvet in the cover and close the opening.

Place the rest of the duvet insert inside the cover by tucking in the corners, then zip it closed; this should turn it inside out. For duvet covers with buttons, make sure to close up all of the buttons.

Now it’s time to unroll the bedding carefully. Once laid out, give the cover a few shakes for a fluffy and full look. Smooth any wrinkles in the duvet cover filling.

And you’re done! You’ve successfully completed the burrito method for putting on a duvet cover.

RELATED: How to Make a Bed (the Right Way)

How to Put on a Duvet Cover: Traditional Method

While the California roll duvet method has been described as the easiest way to put a duvet cover on, there’s another simple way to do it. No rolling here—just a straightforward stuffing method.

STEP 1: Lay the duvet down on the bed.

Whether you choose a comforter or duvet, make sure the insert is flat on the bed.

STEP 2: Place the cover on top of the duvet inside out.

STEP 3: Flip the cover and duvet right side out.

Stuff any remaining duvet inside the cover and secure the opening with a zipper or buttons. Give your cover one last shake to help the insert lay flat and smooth any wrinkles.

Now that you’ve learned the two quick and easy methods to put on a duvet cover, you can focus on creating a bedroom retreat to relax and get your best rest.

To really elevate your bedding, pick a fluffy duvet insert. Choose a duvet insert that’s one size larger than your duvet cover (a king-size insert for a queen-size cover) so the cover looks full and soft once stuffed. Make sure to leave the opening of the duvet cover at the foot of the bed. Then, fold the duvet cover in half from the head of the bed to the foot, and fold the top layer back in half. This gives a rich and full look to your bedding and will give your bedroom a five-star hotel vibe.

You can also swap your duvet cover with the seasons to keep your bedding fresh and timely. For example, a floral cover might be a nice touch in the spring, while a jewel toned cover would be cozy in the fall. These duvet cover tricks make seasonal swapping a breeze to experiment with different styles and allow you to protect your bedding with little hassle.

RELATED: Too Hot to Sleep? This Bedding Will Keep You Cool at Night

Advertisement
TAGS:
HOW TO
BEDROOM
More From Bob Vila

How To: Clean a Down Comforter

Make Your Home Less Chaotic With These 12 Simple Changes