Duvet vs. Comforter: Which is Best for Your Bed?

Duvets and comforters aren’t the same thing, but how are they different? Learn what makes each of these bedding accessories unique. 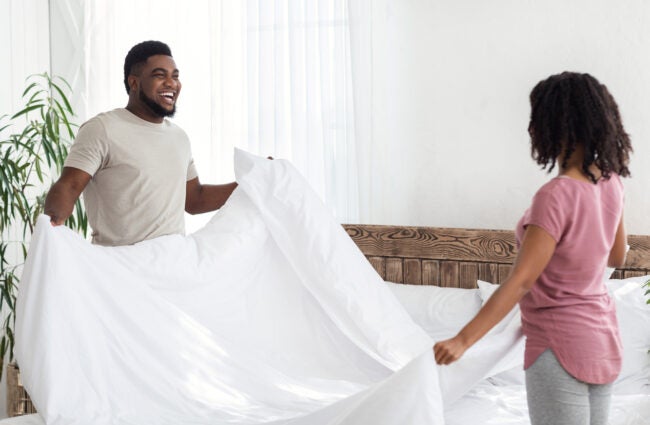 Have you ever wondered whether there is a real difference between a duvet and a comforter? These two bedding accessories are frequently confused with one another, and their names may be erroneously used interchangeably. You may have also heard the term “duvet comforter” thrown around, further complicating things. However, duvets and comforters are not the same thing.

If you’d like to learn about the key differences between duvets and comforters, continue reading. Once you’re able to distinguish what makes each of these bedding accessories unique, you can determine whether a duvet or comforter is best for you.

RELATED: The Best Throw Blankets for the Home

What is a duvet?

Duvets are warm, blanket-like inserts often filled with feathers or natural down. However, wool or synthetic materials may be used as well. Duvet inserts are designed to be placed inside a duvet cover; they are not meant to be used on their own without the cover.

Duvet covers, which function much like a pillow case, keep the inner duvet insert clean and prevent it from getting snagged or torn. The duvet cover adds an extra layer to prevent the quills from the feather or down filling from poking you as you rest.

Our Recommendation: Cosybay Cotton Quilted Duvet Insert on Amazon starting at $54.99
This luxurious feather and down duvet insert offers a baffle box design to keep the filling in place, four duvet loops for easily attaching it to a duvet cover, and a soft and breathable cotton shell.

With: Kotton Culture Plush Duvet Cover on Amazon starting at $49.00
This duvet cover is made from 100 percent soft and plush 600 thread count Egyptian cotton. It features an easy-to-use zippered closure and seven internal ties to keep your duvet in place. Additionally, there are 15 color options to match a variety of bedroom décors.

What is a comforter?

A comforter is a warm blanket designed to be used by itself without a cover. The filling used for a comforter can vary, but may include cotton, wool, or synthetic fibers. To keep the filling in place and prevent it from shifting, comforters feature a quilted pattern. However, comforters are not the same as quilts, either. The main difference between quilts and comforters lies in the thickness of each blanket type—comforters feature additional loft and offer more insulation and warmth than quilts.

Our Recommendation: SLEEP ZONE All Season Comforter on Amazon starting at $34.99
The temperature-regulating microfiber fabric used for this comforter is designed to keep you cool and comfortable as you sleep. The comforter features a down-alternative filling and is available in eight reversible color combinations.

RELATED: How to Wash a Comforter

Duvets are generally thicker and warmer than comforters.

One key comforter vs. duvet difference relates to warmth. In most cases, a duvet will keep the user warmer than a comforter. Duvets are generally designed to be used as the only cover atop the sheets on a bed, while comforters are often placed on top of another blanket.

The fill materials for duvets and comforters are often different as well. Comforters are more likely to be filled using synthetic materials, whereas duvets more commonly feature high-quality down or feather filling.

Duvets are available in specific weights that indicate the level of firmness they provide. This isn’t the case with comforters, which are primarily designed for their aesthetic appeal.

Another difference between a duvet and a comforter is their size. Duvets are approximately the same size as the mattress, while comforters are larger and designed to hang over the edges more.

Comforters are usually part of a bedding set.

Comforters often come as part of a complete bedding set. This means that you can often purchase coordinating pillows, pillow shams, or even sheets for a coordinated and composed look in your bedroom without too much extra work.

With comforters, you can find a wide range of color and design options to match your décor preferences. You won’t need to purchase an additional cover; once you open the bag, your comforter will be ready to use.

Duvets, on the other hand, are nearly always sold alone. You’ll need to purchase a separate duvet cover and any coordinating pillows, pillow shams, or sheets that you’d like.

A duvet is easier to clean than a comforter, but more difficult to assemble.

Because duvets are designed to be used with a duvet cover, the insert itself stays mostly clean and rarely requires washing. Washing a duvet cover is easy; most can simply be tossed in the washing machine and dried in the dryer before being put back over the insert.

When you compare comforter vs. duvet cover care, cleaning the comforter will require additional effort on your part. Many comforters are labeled dry-clean only. If you choose to wash your comforter in your own washing machine, you’ll have to take extra caution to make sure you don’t damage it or cause the filling to clump.

However, while a duvet cover is easier to wash than a comforter, it can be a bit of a challenge to get the insert back into the cover once it is clean. Lining the insert up properly, making sure nothing is getting bunched up, and tying the tabs to keep it all in place can take a while. With a comforter, once it is clean, it can immediately be placed back on the bed.

Duvets are more versatile than comforters when it comes to switching up décor.

One more key difference between a comforter and a duvet is that it will be easier and less expensive to change your décor with a duvet. If you grow tired of the color or pattern on your old comforter, you may have to purchase a whole new bedding set to get a new comforter.

With a duvet, you can simply swap out the cover for a new color or design; you won’t need to purchase an insert. Buying a duvet cover over a comforter will be significantly less expensive. You could even have a few inserts in rotation and switch them out whenever you do laundry or with the change of seasons to keep things fresh and lively in your bedroom.

Solved! What is a Duvet Cover?

The Best Comforters of 2022

The Best Duvet Inserts for Your Bedding

The Best Down Alternative Comforters of 2022

25 Smart, Inspiring Ways to Use a Spare Bedroom