How to Remove Carpet

Pulling up carpet that’s old and worn is a simple, speedy home DIY. Ready your floors for a refresh—or a refinishing—by following these easy steps. 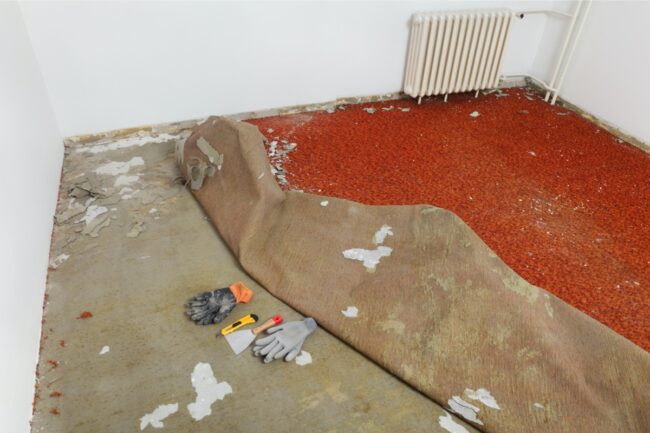 Even with regular vacuuming, carpeting accumulates a great deal of dust, dirt, and debris. When you finally decide to rip it up, be sure to give the carpeting one last thorough vacuuming. Empty the room of furnishings, open the windows, don your dust mask—then get to work.

STEP 1: Take off the shoe molding, if there is any.

Was your carpeting installed under shoe molding? Assuming it was, the first thing to do is remove that trimwork with your putty knife and pry bar. Chances are, the shoe molding is full of nails, so take care when pulling it out. Check the shoe molding for damage: If it looks like it’s in good shape, save it to be reused. If the molding looks a little worse for wear, consider giving it a fresh coat of paint before reinstalling it.

STEP 2: Use a carpet cutting knife to slice carpeting into narrow strips.

Now that there is no obstacle between you and the carpeting, use a utility knife or a sharpened pair of tin snips to cut the carpet material into three- or four-foot-wide strips. Cut all the way through the backing but stop short of the flooring beneath. Cutting carpet can be a difficult with a dull blade, so make sure your tool is sharp before you begin. Begin pulling the carpet away from the tack strips on the perimeter. Roll up the sections as you remove them, placing them into heavy-duty trash bags ready for disposal.

Begin at the top of the stairway. Cut the carpet just under the nose of the landing with the utility knife. Use the vice grip pliers to pull the carpet away from the riser. Grip the pulled up edge with both hands and begin ripping up carpet from the stairs, working from side to side as you move down the stairway. Periodically make cuts so you can pull the carpet up in manageable pieces.

STEP 4: Pry up the carpet tack strips along the room’s perimeter.

Begin removing carpet tack strips, which are typically nailed to the floor and have rows of staggered tacks that face up to “grab” the carpet. Because the tacks are so sharp, it’s wise to wear leather work gloves for this step. Insert the hooked end of your pry bar or a specialized tack strip remover under a tack strip, then press down on the long end to lever the strip upward. Dispose of the strips within rolls of carpeting, so the tacks can’t tear through the plastic garbage bags.

If the carpet padding has been installed with adhesive, laborious scraping may be necessary. An easier option is to apply a commercial adhesive remover to the adhesive. If the padding has been secured with carpet staples, you can rely on nail puller pliers to do the job without gouging your floor surface. Before grabbing the nails with pliers, you might first need to coax them upward a little with a putty knife.

STEP 7: Dispose of the old carpet and padding.

Disposing of your old carpet may be as easy as dragging the trash bags to the curb on waste pick-up day. Check to see if your garbage disposal service has bulk pickup days and if they’ll take large qualities of carpet. If not, you’ll need to take the carpet to a waste-dropoff facility.

If there is a recycling center near you that takes carpet, dispose of it there. Most carpet can actually be recycled into a broad range of products ranging from car interiors to parking barriers.

If carpet disposal sounds like too big of a job, you can hire a professional to do the job for you. According to HomeAdvisor, the cost of carpet removal ranges from $1 to $1.50 per square foot, which includes labor and waste disposal.

By following these simple steps for how to rip out carpet, you can begin the process of upgrading to luxurious new carpet or even a different type of flooring. Before installing new flooring, remember to make any necessary repairs to the subfloor so your brand new flooring doesn’t inherit the squeaks and creaks that plagued your old carpeting.

FAQs About How to Pull Up Carpet

Read on to learn about the health hazards an old carpet can pose and how to go about removing stubborn glued-on carpeting.

Q: Can you get sick from pulling up old carpet?

A. Agitating the carpeting by pulling it up will cause it to release all the dust, pet dander and other allergens that have built up inside of it over the years, irritating the eyes, nose, and throat. With that in mind, it’s a good idea to wear a respiratory mask and goggles when pulling up and disposing of old carpet.

Q: How do you remove glued carpet?

A. Glued-down carpet is easy enough to pull up; however, you’ll need to get rid of the glue that remains on the subfloor before installing new flooring or carpeting. Begin by using a scraper or spackling knife to remove as much dried glue as possible. Use boiling water or steam to soften any glue that remains. Attack stubborn glue with a reciprocating saw equipped with a scraper blade.

Q: How do you remove carpet from concrete?

A. After pulling up the carpet, use the same method described above. Scrape as much glue as possible away, using boiling water to soften any stubborn glue.

Q: What is the black stuff under carpet?

A. The black stuff under the carpet is most likely rubber pieces from old, worn out carpet padding. If there is a leak that’s found its way under the carpet pad, it could potentially be black mold, which should be cleaned immediately.

Q: How do you remove subfloor after removing carpet?

A. To remove the subfloor, use a pry bar to lift the edges of the plywood subfloor up as far as possible. Next, grab the pulled up section of the plywood and lift it up to free the panel from the nails on the opposite side. Use a claw hammer to extract any nails that remain in the floor joists.

TAGS:
CARPETING
HOW TO
MAINTENANCE
FLOORING
More From Bob Vila

How To: Dye Carpet

The 13 Best Carpet Colors for the Home