Solved! Is Earthquake Insurance Worth It? 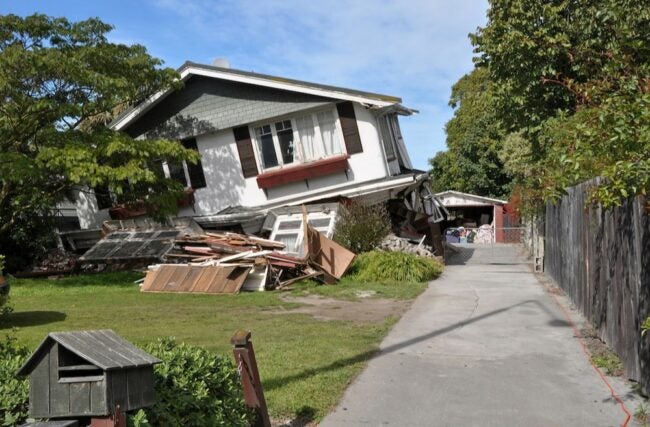 A: A large earthquake can be one of the most devastating natural disasters to hit structures such as houses. Shifting earth could snap structural supports or damage utility lines. Most types of homeowners insurance typically don’t cover damage caused by earthquakes. However, homeowners can usually purchase a separate earthquake insurance policy or add an earthquake endorsement to their existing policy. This might leave them wondering, however, “Is earthquake insurance worth it?”

Earthquake insurance is often recommended for people who live in areas with a high risk of earthquakes.

However, it only takes one large earthquake to cause severe damage to a home. Homeowners will want to consider their personal risk factors and risk tolerance when deciding if they need to get home earthquake insurance. Homeowners can easily see their potential earthquake risk using the U.S. Geological Survey earthquake map.

Homeowners in particularly high-risk areas may want to consider earthquake insurance. For example, much of the California coastline is regularly affected by earthquakes. A homeowner in this region may want to look into the price of earthquake insurance to protect their home. On the other hand, a home in northern Minnesota has a much lower risk of earthquake damage. Homeowners in this area might not consider the price of coverage worth it due to the lower risk.

While many earthquakes cause little to no damage, just one catastrophic event can destroy a home and leave the homeowner facing extortionate rebuilding costs.

Rebuilding a home after a large earthquake is no small project. Even a small, relatively simple house will likely cost hundreds of thousands of dollars to rebuild. In addition, there are costs related to the cleanup or removal of the existing damaged structure. If the earthquake causes any damage to gas or power lines, the homeowner may face hazardous material cleanup costs as well.

After a disaster like a large earthquake, homeowners can also expect building material costs to rise due to demand. For example, if an entire street of homes is destroyed in an earthquake, all of those homeowners will have to compete for resources including materials and builders. This could drive the cost of rebuilding even higher than it might during regular times.

Evaluating the cost of rebuilding a home is an important part of the process for homeowners when they’re comparing the pros and cons of earthquake insurance, as well as factors including:

Most homeowners, renters, and condo insurance policies do not cover damage caused by earthquakes.

Earthquake insurance can provide dwelling coverage for homeowners whose home suffers damage from an earthquake event.

Known as dwelling coverage, this insurance protection helps cover costs to repair or rebuild a homeowner’s house if an earthquake causes damage. It also usually covers any structures attached to the home, such as a garage. Some policies may include protection for detached structures on the property as well, like a garden shed or fence. Homeowners will want to carefully read their policies to know what structures are and aren’t covered by earthquake insurance.

In addition to dwelling coverage, most earthquake insurance policies help cover repair or replacement costs for the policyholder’s personal belongings. Personal property coverage helps homeowners replace any goods destroyed or damaged by an earthquake. Like dwelling coverage, personal property coverage usually has coverage limits. The policy may also have specific limits for types of items, like fine art or jewelry.

Earthquake insurance for renters and condo owners often works a little differently than homeowners earthquake insurance. Renters don’t have to cover the physical structure of their rental home—that’s generally their landlord’s responsibility. Likewise, condo owners typically own the interior of their units; the overall building or condo complex is protected by an insurance policy managed by the condo association.

This means a renter or condo owner usually only needs to protect their belongings in case of earthquake damage. Renters and condo insurance policies, like traditional homeowners insurance, usually don’t include earthquake coverage. Renters can purchase a policy with one of the best renters insurance companies in their area and then find out if they can add an earthquake endorsement or take out an earthquake-specific policy.

Additionally, earthquake insurance can cover the cost of extra living expenses incurred if the policyholder is required to relocate while repairs are made to their home.

What happens to the homeowner if their house is destroyed in an earthquake? They’ll need somewhere to stay while their home is being assessed and rebuilt—as well as a way to pay for it. For many homeowners who have earthquake insurance, their insurance policy takes care of at least some of these costs.

Additional living expenses coverage, which is also called loss of use coverage, helps homeowners pay for the cost of living outside their home during repairs. If an earthquake makes a home uninhabitable, the homeowner may choose to rent a room in a hotel or short-term rental, and loss of use coverage can reimburse the policyholder for these expenses. Additional living expenses coverage can also cover meals and transportation above normal living costs if the policyholder needs to eat meals in a restaurant rather than at home, or drive to work rather than walk.

For example, a homeowner’s house may be severely damaged in an earthquake, leaving them unable to live there for 6 months. The homeowner may rent an extended-stay hotel room to live in while their home is repaired. The hotel may be farther from their place of  work than their home is, making their transportation costs about $100 higher than usual per month. Their earthquake insurance policy could cover the additional $100 monthly cost incurred by commuting to their workplace from the temporary residence.

Policyholders may be able to opt for additional coverage for building cost upgrades and emergency repairs—but this comes at a higher cost.

Earthquakes are a unique type of natural disaster because they can do more than cause damage to walls, windows, and belongings. An earthquake could potentially alter how the land sits underneath a home. In turn, this could compromise a home’s foundation or foundational structure. Shifting earth and foundations could mean the homeowner needs to make emergency repairs to save the overall structure of the home.

Homeowners may also want to have their houses inspected after an earthquake to make sure they’re structurally sound. If the house doesn’t pass inspection, the homeowner could be on the hook for expensive foundation repairs or electrical upgrades.

Earthquake insurance premiums can be expensive, and deductibles tend to be on the higher end.

Ultimately, earthquake insurance can be well worth the cost for those who live in a high-risk area, such as California.

Solved! Is Renters Insurance Worth It?
Advertisement

The Best Homeowners Insurance in California of 2023

Solved! Is a Home Warranty Worth It?

The Best Homeowners Insurance Companies of 2023