How To: Dry a Wet Basement

Protect your possessions and home from mold, rot, and insects. 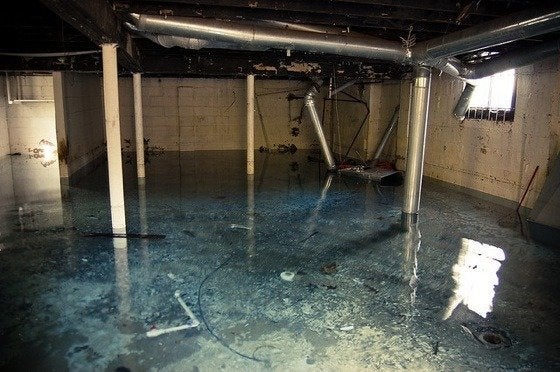 A basement water problem can be as obvious as there being several inches of floodwater standing at the base of the stairs. But runaway moisture doesn’t always manifest itself in plainly visible ways. For instance, it’s not uncommon for homeowners to notice the area feeling humid or smelling stuffy, despite close inspection not revealing the presence of any liquid droplets or small pools. In such cases, look for subtler signs to provide a clue as to what you’re dealing with. Rotting wood, efflorescence (a chalky white substance left by evaporation), spongy carpeting, loose floor tiles—all point to the same underlying issue.

In order to dry out a wet basement, you must begin by determining the cause. Common explanations include the infiltration of surface water, infiltration of groundwater, or air with an unusually high moisture content.

Even certain weather conditions can leave your basement in need of drying, and you can’t discount the possibility of indoor activities (something like an improperly vented dryer) resulting in uncomfortable, if not damaging moisture.

To avoid ongoing problems with mold or mildew, get rid of any water-damaged furnishings and possessions in the house, unless they can be properly cleaned. Then identify and treat the source of the problem.

If surface water is the culprit, then to make your basement dry again, begin by watching how the roof drainage system works and where rainwater flows during a storm.

A gutter or downspout plugged with debris may be sending rainwater over the gutter, down along the foundation, and into the house. Regular, twice-yearly gutter cleaning—or installing gutters that prevent debris from collecting in the first place—should do the trick.

If your gutters aren’t clogged but rainwater still flows over the sides, the snag may have to do with the downspouts being clogged or incorrectly sized for the roof area. In case of the latter, don’t worry—there’s no need to rip out your current gutters and start from scratch. Instead, common remedies include putting in additional downspouts (or increasing the downspout size and its corresponding gutter opening).

Another possibility: If you have downspout extensions to drain rainwater away from the house, it may be that they’ve been improperly placed, or that they simply aren’t long enough. Experts suggest extensions of at least 10 feet in length. That way, discharge gets deposited at a safe remove, without flooding into the neighbor’s yard.

You may also want to check the grade—the slope of the terrain around your house—to see if it has been improperly set or if it has settled in spots. Check paved areas, driveways, and walkways—any or all may be directing rain and snowmelt toward the house. Make no mistake: Your property must slope away from the house, not toward it.

Finally, note that window wells and stairwells can both collect precipitation, leaving the house vulnerable to leaks. To safeguard a window well, consider adding a drain system at its base or covering the opening with a clear plastic cover. If, on the other hand, a basement stairwell appears to be blame, you’ll want to add a raised-lip edge (or even a roof to cover the area).

Groundwater is difficult to control. No matter the cause—whether the ground saturation is due to rain or an underground spring—water pressure pushes moisture against the foundation of the house and, if the groundwater level rises above the level of the basement floor, leaking soon follows.

A homeowner may try patching foundation cracks from the inside, but doing so doesn’t prevent water from getting into the exterior section of the wall—something that can weaken the foundation. After pinpointing the source of the leak, you may want to dig along the foundation to see if the repairs needed on the outer wall would be large or small. Large cracks may require the services of a structural engineer or another repair specialist.

Whether it originates outdoors or indoors, warm, moist air can condense on the relatively cool concrete walls and floors of the basement. A fan to circulate household air may help matters, but it’s far better to employ a dehumidifier or air conditioner to prevent moist air from accumulating in the first place.

Note that if the moist air originates indoors, it may be coming from one or a combination of sources. For instance, even a working sump pump can produce unwanted humidity. That said, if you think your sump pump may be contributing to the problem, you can typically solve it by installing a floor drain and putting a tight-sealing cover over the pump.

A dirt floor or crawl space may also emit moisture. One possibility is to pour a concrete floor over a sealed polyethylene moisture barrier on the floor. For crawl spaces, a ground cover will reduce the moisture coming up through the earth. Insulate perimeter walls if water pipes or heating ducts are in that area. Insulate cold-water pipes and walls. Install proper dryer exhausts and vent basement showers directly outside. Don’t hang wet laundry inside.

In the course of drying a wet basement, you may also find it becomes necessary to replace decaying wood. If the wood elements in need of repair are part of the house framing, be sure to check with a professional to see if there are structural problems.

Basement Waterproofing: Here's How to Dry Out a Wet Basement—And ...

The 10 Best Colors for a Brighter Basement