7 Truths About Micro Apartments That May Surprise You

Micro apartments may be the smallest of living spaces with many benefits, but this housing trend is not for everyone. 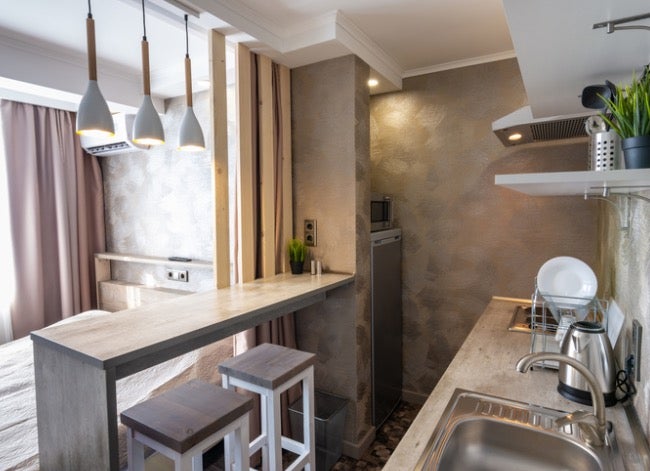 Micro apartments, which are generally less than 350 square feet, are tight on living space but offer gigantic benefits for the right person. These tiny—smaller even than studio apartments—living spaces are surging in popularity in many urban areas as they not only appeal to the budget-savvy renter, but they also offer other perks such as efficiency and location, and many come with amenities such as pools, common areas, and a feeling of community that may be hard to turn down.

Despite these benefits, micro apartments aren’t for everyone. So before you pack your bags and boxes and get ready to move, here are seven surprising truths about micro apartments you’ll want to know.

1. Micro apartments are designed for one occupant.

Consider this: The average size of a master bedroom in a home in the United States is 224 square feet, according to CRD Design and Build, a Seattle-based company. Imagine two people trying to live their entire lives in a space barely bigger than that. The storage, sleeping, and eating capacity of a micro apartment is much better suited to a single dweller rather than multiple people. When one person wants to be in the kitchen and one wants to be in the living room, but they’re actually the same space, things get crowded.

As with any other kind of real estate, the price of micro apartments varies from city to city. Since most micro apartments are found in bigger cities where rent prices may be high, these small apartments may be a financially good option for renters. Those looking for micro apartments can expect to spend about 20 to 30 percent less per month than they would for a traditional apartment, according to the Urban Land Institute Multifamily Housing Councils.

There’s a flip side to every story, of course, and it should be noted that, depending on location and design, rental rates for micro apartments can sometimes actually be equal to or higher than that of studio apartments with more square footage. That’s because construction costs aren’t necessarily less just because the space is smaller. Bathrooms and kitchens are expensive to build, with living space such as bedrooms and living rooms being the cheapest. Since micro apartments must have a kitchen and bathroom, the cost savings from smaller living spaces is negligible. Plus, many micro apartments come fully furnished and have more amenities than other traditional apartment buildings, pushing the cost higher.

The good news? Renters of micro apartments may find they pay less in utility bills since the space is smaller.

3. They are not ideal for pets.

Due to their size, micro apartments aren’t ideal for pets. In fact, many micro-apartment landlords have no-pet policies, or very strict limits on pets. Like people, pets often need personal space and room to exercise and relax that micro apartments just can’t offer. Pets underfoot in a tight space can be uncomfortable for both the human and the 4-legged occupants. If you have a pet, be sure to inquire about pet policies before signing a lease. You might end up deciding a goldfish is just right for your micro apartment.

Micro apartments are becoming big business in many expensive cities such as New York City, San Francisco, and Seattle. In fact, many cities are pushing for more micro apartments to help with the housing crunch. In 2015, New York City Mayor Bill de Blasio introduced a plan to use rezoning to create thousands of new, smaller apartments in the city by 2026 that would be rented for below market value. The craze makes sense, as two-thirds of the world’s population will live in cities by the year 2050, according to a United Nations report.

5. Small living spaces are easier to maintain and clean.

Not big into cleaning? That’s a benefit of micro apartments as there is less to clean and maintain. Think of it this way—since micro apartments are smaller, every item must have a purpose and place or the space will look crowded and cluttered. This forces you to keep only what you love and need. With less square footage to tidy up, many micro-apartment dwellers appreciate the time they gain for other activities.

Related: Here’s What Life Is Like in Some of NYC’s Tiniest Apartments

6. Furnishing a micro apartment could get expensive.

While some micro apartments may come fully furnished, if you do need to buy furniture you may end up spending a bit more than you would have expected to outfit such a small space. That’s because your furniture may have to do double-duty, such as a dresser that doubles as a nightstand or coffee table. Your bed may be lofted or in a fold-out design. Desks may need complex engineering in order to fold up out of the way. Plus, you may have to look for pieces that fit certain length or width specifications. These special requirements can increase the cost of each piece.

While furnishing a micro apartment may cost more than you’d expect, know that many micro apartment buildings have common areas for working, watching television, and relaxing, offering some flexibility as to how one would go about furnishing their private space.

Just because you live solo in a micro apartment doesn’t mean you’ll always go it alone. The communal spaces mentioned above can help foster community. Common spaces such as kitchens, work spaces, game rooms, gyms, and even rooftop decks help create a sense of community for micro apartment dwellers.

New York City-based leasing manager Brandon Ochs told the National Apartment Association that today’s younger residents require less living space and want more community space and builders are taking note. “They have less stuff and spend more time doing things. We used to create big lounges and libraries and people would use them to work in. Now we are creating purpose built co-worker spaces instead because a lot of our residents work from home and this type of community space is what they want,” he said.

10 Signs You're Paying Too Much for Your Mortgage
Advertisement

Condo vs. Apartment: What’s the Difference, and Which One Is Righ...

This is How the Pandemic has Changed What Renters Really Want

Relocating? 10 Factors to Consider as You Choose a New Place to Live