Modem vs. Router: What’s the Difference, and Do You Need Both Devices

Between the LANs, WANs, and ISPs, who knows what the average home needs for internet service? We do, and we explain it all in this modem vs. router guide. 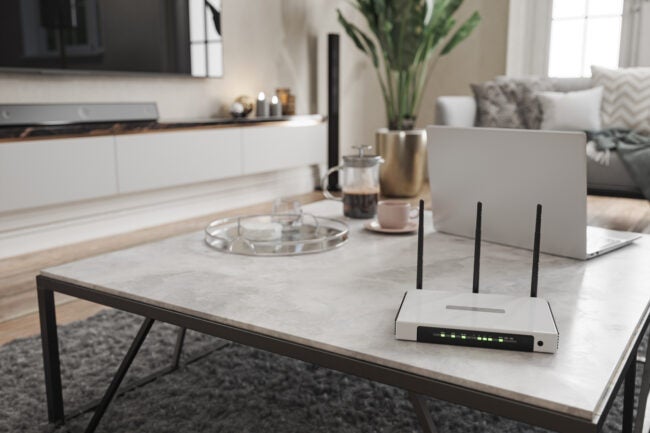 At this point, many folks have had internet in their homes for decades. In that time, they’ve been using modems and routers for internet access because, well, they have to. But many don’t really know what these devices do, even occasionally using the terms interchangeably. All we know is that they somehow magically connect us to the internet, but what is the difference between a modem and a router?

It’s not magic and there is a difference between these devices, and this modem vs. router guide will explain what those differences are.

What is a modem?

A modem is a device that provides a home with access to the internet. This device takes digital signals and converts or translates them into signals that a computing device like a desktop, laptop, or smartphone can use and understand.

There are three common types of modems: dial-up, DSL, and cable:

There are other modem types, as well, such as fiber optic. However, they’re not nearly as common as DSL and cable.

Modems have just a few ports for wires. The WAN (wide area network) port is for the cable coming from the internet service provider (also called an ISP), while the other port connects the modem to the router or electronic device. The ports that connect devices accept ethernet cables, which is a type of cable designed to carry broadband signals between internet-capable devices.

In many cases, an internet service provider will rent a modem to their customers. The customer pays monthly for the device, but it’s covered under a service contract and upgrades may be free at certain intervals.

Alternatively, internet customers can purchase their own modem and skip the monthly fee. This allows users to update their modem whenever they’d like and save money.

What is a router?

A router is a device that takes the signal a modem provides and distributes it to multiple devices. For instance, a standard modem can only connect to one device, such as a computer, and it will do so with a cable stretching from the computer to the modem. A router attaches to the modem in the same manner (with a cable), but allows multiple devices to access the internet by creating a local area network, also known as an LAN. Some ISPs rent routers, but more typically customers must purchase their own.

There are two different types of routers: wired or wireless. The distinction is how devices connect to the router, not how the router connects to the modem. All routers must connect to a modem with an ethernet cable, so don’t expect a wireless router to simply work on its own.

Wired routers have multiple ethernet ports in the back, and users can run cables from these ports to their devices. For instance, to connect a TV, computer, and game console, they’d have to run three separate cables plugged into three separate ports behind the router. While this is inconvenient, high-quality cables and wired routers can produce fast, uninterrupted speeds with very little fluctuation.

Wireless routers also have a few ethernet ports, but their main function is to connect to devices wirelessly. This includes devices like phones, laptops, and tablets, but also can include TVs, game consoles, security systems, digital voice assistants, and smart-enabled bulbs, switches, and door locks. They also prevent the need to hide cables, which can be difficult and detract from a home’s design.

Routers also help increase the home network’s security. Routers can act as firewalls to prevent outside attacks and security hacks. They can also prevent cyber criminals from accessing the data sent back and forth between the router and the connected devices. It’s important not to overlook this ability, as a data breach, even just within a simple family home, can lead to disastrous results.

Our Recommendation: TP-Link AX1800 WiFi 6 Router
TP-Link’s AX1800 provides speeds up to 1.8 GBps, offers wifi and 4 wired LAN connections, and it can handle up to 40 devices.

RELATED: 13 Ways to Boost Your WiFi Signal at Home

What is a modem router combo?

While most homes need the functions of both a modem and a router, it doesn’t necessarily mean they need two separate devices. There are modem-router combos that allow users to access the internet and spread it out to several devices within the home, all from one device. These devices are commonly called gateways, and they can be the right solution for many folks.

Using a modem router combo can save a homeowner quite a bit of money. Rather than renting or purchasing a modem and a router, they can make one purchase that covers both. Also, since everything is wrapped up into one device, gateways are typically less time-consuming to set up.

However, there are downsides to gateways. They’re typically a bit slower than separate devices, and their signal is often weaker. Also, they rarely allow for much customization, while separate devices allow for customizable parental controls and the ability to throttle access to different users and devices.

In a modern home, both technologies are necessary.

There really isn’t a WiFi modem vs. router debate. They’re both necessary for most homes.

There may be situations where a simple modem would do the trick. Folks who don’t use a smart phone, for example, and simply rely on the internet connection to their computer, don’t need a router. But, to truly take advantage of everything modern technology has to offer, both technologies are necessary.

A router without a modem is a paperweight, but a modem without a router is a log jam in today’s world. Having to switch an ethernet cable from the TV to the computer to the game console is a pain, and it’s this siloed frustration that makes routers so necessary. Add in wireless connectivity, and a router can handle dozens of devices, whereas a modem (regardless of its speed) can handle just one.

A mesh WiFi system can level up a home’s network.

There are additional types of devices or systems that shoppers should consider. For folks who need a fully connected home with strong signal regardless of where they are, a WiFi extender may be helpful. These devices can amplify the WiFi signal to provide a device with strong uninterrupted service from further away from the router that would otherwise be possible. But, a mesh system can do even better.

A mesh WiFi system is even more powerful than a WiFi extender. These systems take the place of a standard router (mesh systems include their own mesh routers), and transfer signal to modular nodes. Each node receives and sends data, allowing the user to increase their WiFi signal’s range. If the range isn’t reaching far enough, they can add more nodes. These systems are ideal for large properties with several buildings that require internet signal.

5 Tips for Finding the Best Internet Setup for Your Home

Choosing the best internet setup for a home comes down to several factors, and the answers are relative to each home’s needs and wants. However, the following are some of the most important tips or points to consider when making an internet modem vs. router decision.

RELATED: Solved! What is a Smart Plug?

How to Be Your Own Tech Support
Advertisement

9 Ways to Turn Your House into a Smart Home

12 Inventions That Do All Your Chores