A Brief History of Nutcrackers 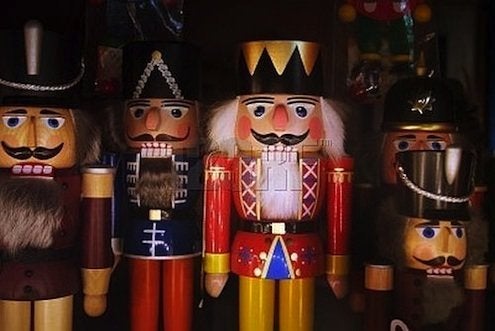 Before the term “nutcracker” conjured images of twirling ballerinas, it referred to a practical tool whose use dates back to Roman times.

Back then—and for much of its history—nutcrackers were made of various metals. The figural wooden designs that have become synonymous with the holiday season originated sometime in the 15th century in the forested regions of southern Germany, an area known for its woodcarving traditions (think cuckoo clocks and ornately detailed furniture).

We can thank writer E.T.A. Hoffmann for introducing the humble nutcracker—a traditional German woodcraft—to the international stage. It was Hoffmann’s 1816 novella “The Nutcracker and the Mouse King” that inspired The Nutcracker ballet, which went on to become a cherished Christmas event around the globe following its 1892 debut in St. Petersburg, Russia.

The first American productions of the ballet were performed in San Francisco in 1944 and New York City in 1954, sparking new interest and a collecting craze.

Today, the stern-faced figurines have become synonymous with Christmas, and homeowners often incorporate them into festive displays.

The most coveted designs on the market hail from the same German workshops that have made nutcrackers for generations, among them the Steinbach Family and Christian Ulbricht, which can cost $300 or more.

Replicas crafted in Asia are considerably less expensive, about $25 to $50 apiece, offering enthusiasts of any budget the opportunity to cluster a lively group of nutcrackers along a windowsill, shelf, or mantel.

For more on holiday decorating, consider:

It's All in the Details—The Greek Key
Advertisement