What is Reversible Architecture?

The key to reversible architecture lies in implementing building and design methods to produce structures that can be repurposed. 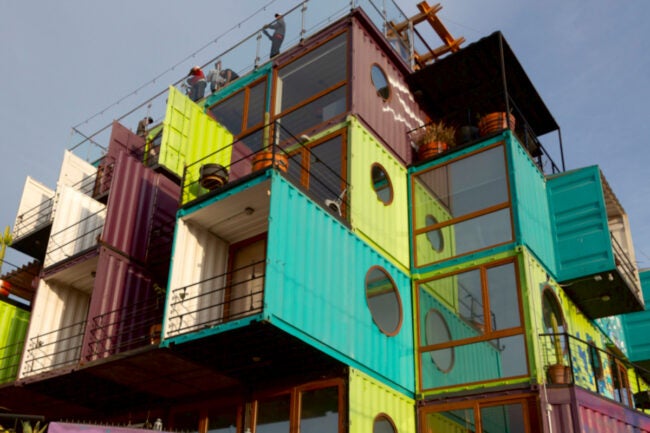 A drive through any American ghost town reveals buildings in various states of decay: collapsed roofs, fallen walls, and broken windows staring out from homes and businesses that have seen better days. Reversible architecture, also called “demountable construction” and “reversible design,” seeks to minimize (or eliminate) the waste that occurs when buildings no longer serve a vital purpose.

If you haven’t heard about reversible architecture, you’re not alone. The idea is still in its infancy, but a few notable examples of demountable buildings already exist, such as the Ras Abu Aboud Stadium in Qatar, which was built using shipping containers for walls. Designing to allow for construction materials to be repurposed later reduces the manufacturing processes needed to produce new materials. As a result, the construction’s carbon output is lowered.

Witnessing the razing of a high-rise building is an awesome yet unnerving experience. Within seconds of the explosive charges detonating, the entire structure collapses upon itself, reducing to a pile of rubble and a billowing cloud of dust. Very little is salvageable when buildings are demolished using traditional means, and tons of debris are dumped into landfills.

Advocates of reversible architecture seek to change that. Using inventive materials and assembly methods, a demountable structure can be disassembled rather than destroyed at the end of its useful life. The materials can then be used for other purposes.

RELATED: Check the Label: A Guide to Green Designations for the Home

The driving principle behind reversible architecture is the desire for greener construction methods. While there are no set rules guiding the practice, at least part of a demountable building should contain components that can be reused. According to Arch Daily, the Tij Observatory, a birdwatching lookout in Swellendam, the Netherlands, was made using recycled posts and planks. The wood was milled offsite and then assembled on location. When the observatory is no longer needed, the components will be disassembled and reused elsewhere.

The idea of reducing waste and repurposing materials is a factor in developing a circular economy, an economy that focuses on the continual renewal of resources. Reversible architecture is just one part of a larger initiative represented in the Save Our Seas 2.0 Act, which was passed by the U.S. in 2020. The law seeks to reduce trash and waste that finds its way into our oceans by stopping the problem at its source, and one way it’s achieving that is by repurposing construction materials.

In addition to repurposing materials, reversible architecture focuses on transforming a structure’s primary use. That’s where some protocol guidelines developed by Buildings as Material Banks can help. During a reversible building’s design phase, provisions are made to transform its future use. For example, when designing an office space, it could be planned to transform the space into a classroom or apartment when the office is no longer needed.

While most examples of reversible architecture are large commercial structures, DIYers can bring the same design principles home by building projects with components which can be disassembled and repurposed later. For example, screws are easier to remove than nails (and more often functional) when deconstructing a shed or doghouse. Dry-stacking stones for a raised flower bed rather than using mortar to position them can make it much easier to salvage and reuse the rocks later. Reversible architecture and other sustainable building practices make a difference at any scale, and considering the future of what you build today is an essential mindset in an era of unsustainable waste.