How to Grow Salvia

Proper salvia care produces tall stocks of vibrant, long-lasting flowers in the garden from spring through fall. Pollinators love these fragrant beauties, and so will you. 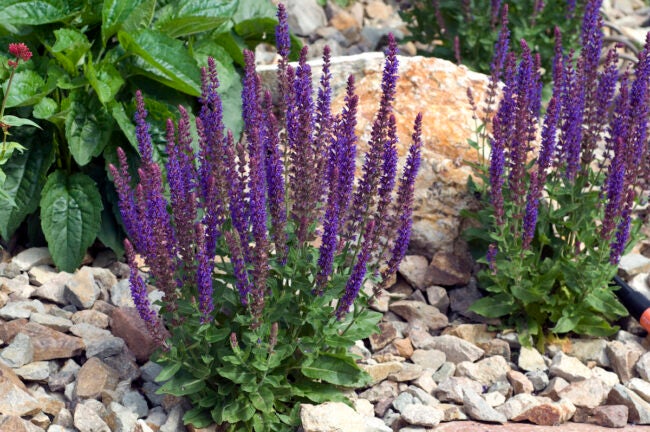 Salvia, also known as sage, is a member of the mint family that produces tall, brightly colored spikes of tubular-shaped flowers on square stems. Its velvety leaves are highly fragrant, acting as a deterrent to deer and rabbits, but its aromatic and densely packed flowers attract bees, butterflies, and hummingbirds.

Of the more than 900 species of salvia, the most common colors are red, purple, white, pink, and salmon. There’s even a blue salvia. The sun-loving, drought-tolerant salvia plant produces an abundance of flowers from spring through first frost and needs little attention once established, making salvia care easy.

RELATED: 14 of the Best Plants for Your Drought Tolerant Garden

Growing Salvia at a Glance

There are perennial salvias and annual salvias. Annuals tend to have scarlet, purple, or peach flowers. Perennials are often blue, purple, or white. Both produce tall, columnar stalks of densely packed, vibrant flowers. The long-lasting salvia flower opens from the bottom of the square stem first, progressing up to the tip.

Blue-green velvety foliage is a reminder of its kinship to sage, just as its aromatic leaves signify its relation to mint. Fragrant flowers attract pollinators while the aroma of the leaves tends to repel pests.

A Mediterranean native, the more common ornamental and culinary salvia (sage), known as Salvia officinalis, is known for its easy care, drought tolerance, and healing properties for some types. Salvia divinorum is a relative in the mint family that hails from Mexico and Central and South America, where it was used for medicinal purposes as well as for ceremonies due to its hallucinogenic effects.

There are more than 900 types of salvias in both perennial and annual form, from the common red salvia to more unusual varieties.

When is the best time to plant salvia?

The best time to plant salvia is in the spring after the danger of frost has passed and once the soil temperature reaches at least 55 degrees Fahrenheit. If soil amendment is necessary, plant salvia after that has been done. Because of their size, salvia plants do better in garden beds than in containers.

Where can salvia grow?

Salvia needs well-draining soil, but it can grow in dry, poor, or rocky soil. It fares best in warmer climates and should receive at least 6 to 8 hours of sun per day, although it can grow in partial shade. Those with too much shade won’t produce as many blooms. Salvia likes a south-facing exposure and plenty of space to spread.

How do you plant salvia?

Most salvias are planted as seedlings or small potted plants. The steps are simple and similar to those for most flowering plants.

Can you grow salvia in containers?

Salvia can be grown in containers, but because it is a large plant, a sizable container should be selected. Clay pots are best to allow drainage so roots don’t sit in soggy soil. Container depth should be a minimum of 8 inches, but perennial salvias may still need to be transplanted to a bigger container as the plants grow. Use a loamy potting mix, with 20 to 25 percent compost added. Place the pot in a sunny spot where the plants will receive an average of 8 hours of daily sun, and water regularly.

Because salvia is drought-tolerant, it doesn’t require a lot of water once established. The soil should dry out between water; salvia doesn’t like wet feet. Although it can endure dry stretches and is known to bounce back from periods of drought, salvia does better with consistent watering. Look for signs of stress indicating that plants are too dry, such as shriveled leaves, dry or cracking soil, or stems leaning over. Water at the base of the plant, preferably in the morning or afternoon to help the soil dry enough to reduce diseases caused by overwatering.

As a low-maintenance plant that tolerates poor soil, salvia is known as a light feeder that doesn’t typically require fertilizing. It can, however, benefit from adding compost or a general-purpose fertilizer that has equal parts nitrogen, phosphorus, and potassium to the soil when planting in the spring. Plants don’t usually require fertilizing during the summer, although a monthly half-dose can encourage blooming. Another way to encourage blooming is to deadhead salvias after flowers are spent.

Annual salvias don’t require pruning, but perennials can benefit from it each spring. Deciduous herbaceous salvias will die back in the winter. Using sharp shears, cut the old stems back at the lowest shooting node. If the stems have completely died off, cut them back at the base.

Hardy, shrubby salvias need pruning to keep them from becoming straggly. To maintain a compact form and provide a base for new growth, prune about one-third of the plant after new growth appears near the ground in spring, cutting just above a pair of leaves. They can be cut back to the lowest nodes for a hard pruning.

During the summer, deadhead spent flowers and trim for shape.

Some varieties of salvia self-seed and will return every year. Otherwise, salvia is usually propagated through cuttings or by division.

Take cuttings from non-flowering branches that are around 3 inches long. Strip the lower leaves and trim each cutting below a node before placing them in a pot of compost. Cover the pot with a plastic bag and set in a cool greenhouse with protection from the sun.

Perennial salvia grows wide and forms new plant shoots that can be divided. The plant should be allowed to grow for 2 to 3 years before dividing.

In general, salvia is considered nontoxic to people and pets. However, some ornamental varieties, such as Salvia splendens, contain a small amount of toxins that can harm pets if ingested. They can act as an anticoagulant, according to studies done on dogs.

Other varieties have hallucinogenic properties when chewed, smoked, or steeped in tea. There haven’t been studies done yet about the detrimental effects, but some people may experience neurologic, cardiovascular, or gastrointestinal side effects. It can impair long-term memory or induce a panic attack. It does not seem to cause dependency. Culinary salvias are safe herbs to eat.

Salvia is not particularly prone to diseases, but can suffer from:

Salvia is a perennial in Zones 4-8 and should come back every year. Perennial salvias don’t require special care to overwinter, although the deciduous herbaceous salvias can benefit from being pruned by one-third or even all the way to about an inch above the ground in late summer to mid-fall. They will do fine without pruning.

Potted perennial salvias should be planted in the ground for winter protection from the cold in all but the warmest growing zones. Annual and non-hardy varieties should be removed from the garden in winter.

Looking for more low-maintenance plants? Check out our guides on growing 30 plants for your easiest garden ever and 25 no-effort plants for a foolproof landscape.

The 9 Easiest Plants You Can Buy on Amazon

27 Gorgeous Plants That Attract Hummingbirds to Your Garden

12 Gorgeous Plants to Attract Hummingbirds to Your Garden