Powdery Mildew: How to Prevent and Treat This Common Plant Problem

When your plants look as if they have been powdering their faces—or, rather, the faces of their leaves—you might have a mildew problem. 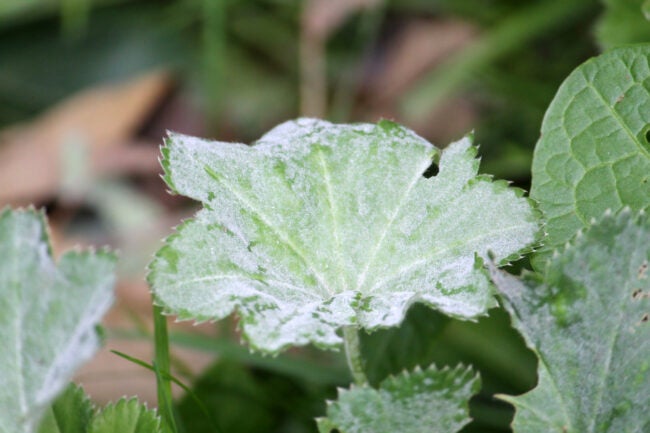 Powdery mildew on plants is most common during spring or autumn when nights may become significantly cooler and more humid than days. At those times of year, flower or vegetable beds sometimes become literal gray areas.

Powdery mildew is most likely to affect species already weakened by poor care or conditions, especially plants that aren’t getting their fair share of sun or space. That means the best way to prevent powdery mildew is to keep your plants as healthy and happy as possible.

RELATED: 10 Common Garden Problems—and How to Fix Them

What Is Powdery Mildew?

There are actually a variety of powdery mildews, not just one. Diseases caused by fungi whose spores spread from plant to plant via wind or rain, some types of powdery mildew are specific to certain fungal species and others to certain plant families, while still others are less picky.

The lilac powdery mildew (Microsphaera syringae), for example, affects only lilacs, while rose mildew (Podosphaera pannosa) also affects briars closely related to roses, such as blackberry and raspberry. However, Podosphaera xanthii, which affects a variety of cucurbits like cucumber and squash, also can spread to unrelated flowering plants like calibrachoas and petunias.

Powdery mildew on leaves generally isn’t harmful to people—except those sensitive to molds and mildews, in whom it may cause allergy symptoms.

Watch for white spots on leaves in spring or autumn when warm, dry days—with temperatures up to 80 degrees Fahrenheit—are followed by cool, humid nights that drop down to 60 degrees. Powdery mildew is most likely to affect species that are overcrowded or aren’t receiving enough sunlight.

Characteristics of the Fungus

When in full “bloom,” mildews typically cause plants to look as if they’ve been dusted with gray or white powder. In some species, though, these diseases will manifest as red or yellow “burn” marks on leaves rather than a white coating.

Powdery mildew often makes its first appearance as tiny white spots on plant leaves. If that initial “pox” isn’t noticed, the white spots might spread via wind or rain-borne spores to coat the entire plant and other nearby ones. After leaves drop in the fall, fungi can linger in their debris to infect more plants the following spring.

In addition to the unsightly white powder on plants that it creates, this fungal disease sucks much of plants’ vitality from their foliage and flowers. Powdery mildew symptoms can include discolored or distorted leaves and blooms and burnt or dead-looking tissue, which often prevents affected flowers from opening at all. In vegetables, the shape and flavor of fruits may also be adversely affected. Infected trees may lose some of their resilience and succumb to winter weather or “wake up” (leaf out) later than usual in spring.

RELATED: How to Get Rid of Fungus Gnats: 4 Remedies That Work

Some plants are especially prone to powdery mildew, especially those set closely together in the shade. Garden phloxes, for example, frequently end up in less-than-sunny beds since they can tolerate and bloom under such conditions. As those bushy perennials usually have many stems all crowded together, powdery mildew spores travel quickly among their foliage.

The same holds true for bee balms, which also tolerate shade but are apt to be healthier and more flowerful in full sun. A good rule of thumb, then, is to give plants as much sun as they can tolerate rather than too much shade. These plants are especially prone to mildew:

How to Prevent Powdery Mildew on Plants

The best way to prevent a powdery mildew problem is to only grow plants that have been bred to resist it. Also, make sure that species described as preferring full sun receive at least 6 hours of sunlight a day and that all plants are spaced out widely enough to allow for good air circulation. Reduce relative humidity on plants by watering at ground level beneath the plant instead of from overhead.

Avoid over-fertilizing plants and keep all suckers trimmed off of trees, since an overabundance of new soft growth makes them especially vulnerable to disease. A fresh mulch applied around plants in the spring may help to keep powdery mildew in soil from reaching the plants’ leaves.

How to Treat Plants Infected With Powdery Mildew

As for powdery mildew treatment, there’s actually no method for affected foliage, which sadly cannot be “cured.” However, you can prevent the spores from traveling to other leaves on the same plant or nearby plants by cutting out the affected leaves and spraying the others regularly with a fungicide. First, though, you’ll want to consider whether the outcome will be worth the time and effort.

Decide whether your plants require treatment.

Many mildew-prone deciduous plants, such as lilacs and peonies, are infected in the autumn when it almost is time for their leaves to fall, anyway. In those cases, instead of applying a powdery mildew spray, you might as well just wait for the foliage to drop. Then, gather it up and dispose of it to prevent the plants from getting reinfected in spring.

If the mildew occurs in spring instead, on species that need to look their best throughout the summer, trim off all of the affected foliage. Don’t place that foliage in your compost pile, which might not heat up enough to kill the spores. Instead, either burn it or bag it and place it in the trash. Afterwards, thoroughly disinfect your pruning shears.

Spray your plants with a fungicide.

With all of the affected foliage eliminated, spray nonaffected foliage with a fungicide, preferably an organic one that won’t adversely affect bees and other beneficial insects. Clemson Cooperative Extension suggests a home remedy for powdery mildew that includes 3 tablespoons each of light horticultural oil and baking soda mixed with 1 gallon of water. Don’t apply this during the heat of day; rather, apply it during late evening after bees have returned to their hives.

Continue to apply fungicide regularly, but be careful about mixing different types.

Whether you use the baking soda spray or another organic spray such as a sulfur-based fungicide, you will need to apply it as frequently as is recommended—usually either weekly or biweekly—for it to be effective. Never apply sprays when the temperature is above 90 degrees, and don’t combine sulfur with horticultural oil or attempt to rotate those two fungicides, which don’t “play well” together.

Keep an eye on mildew-prone plants.

In subsequent years, keep an eye on plants prone to powdery mildew during spring and autumn. (The disease is less prevalent during the heat of summer.) If the plants appear overcrowded, thin them out by pruning to allow better air movement. Also, check the surfaces of their leaves occasionally so that you can catch and eliminate mildew early while it’s still at the white spot stage.

How to Grow Peas

How to Grow Bee Balm

11 Reasons Your Houseplants Are Dying

How to Grow Zinnias

How to Help Your Houseplants Survive the Winter