What’s the Difference? Mold vs. Mildew

Though these two potentially harmful household fungi are often talked about in the same breath, they each have unique traits that can help you tell them apart. 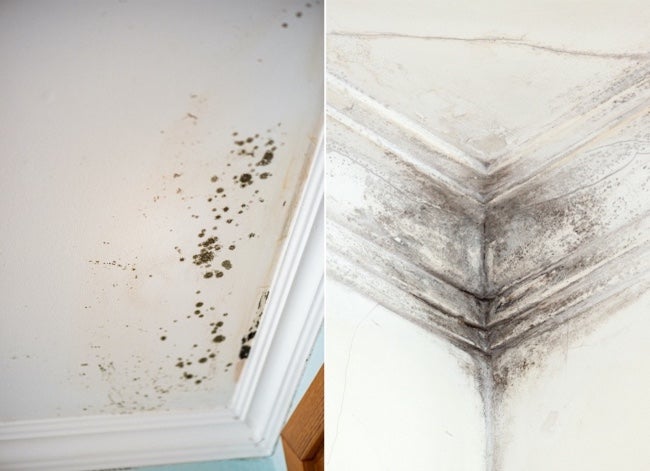 There’s a lot of confusion about the difference between mold and mildew, likely because of how much these two organisms have in common. In fact, mildew is simply a particular type of mold. Both mold and mildew are fungi that thrive in moist environments, and both often are found in the home, especially in damp areas that have been subjected to water damage.

While mold and mildew have many similarities, some key characteristics also differentiate them—and dictate how to get rid of them. Read on to learn more about the differences of mold vs. mildew.

Don't Leave Your Health to Chance
Mold testing and removal pros are just a click away. Get free, no-commitment project estimates from experts near you.
Find a Pro

Mold looks slimy or fuzzy, while mildew is powdery.

It’s important to figure out whether you’re dealing with mold or mildew, and luckily the two types of fungi differ in appearance, making them easier to identify. Mildew usually looks white or gray and dry, or even powdery. It always appears flat. Mold, on the other hand, often is raised and can be green, red, blue, or black. Plus, it generally looks either slimy or fuzzy.

Another way to identify the difference is by smell. Mildew has a milder, musty smell that some compare to damp socks, but mold smells stronger and more pungent. The reason mold has a more powerful odor is that as it grows, it produces microbial volatile organic compounds (MVOCs).

RELATED: 14 Surprising Places Where Mold Hides in the Home

Mold burrows, but mildew grows on the surface.

Both mold and mildew can appear on natural materials like wood, paper, or leather. In the home, they’re most likely to show up in damp areas like basements, bathroom walls, and anywhere with past water damage. Mildew, in particular, thrives in humidity—a relative humidity between 62 and 93 percent is ideal for growth—which is why you’ll see it in shower stalls and on windowsills.

Need Mold Removal?
Mold removal is best left to the pros. Get free, no-commitment project estimates from experts near you.
Find a Pro

Temperature also matters, with mildew generally reproducing when temperatures range between 77 and 88 degrees. Mildew is a surface fungi, so it’s easy to spot in those moist areas, and leads to less damage. Mold, on the other hand, is more insidious and burrows underneath the surface, making it harder to eliminate.

Mildew can cause some health effects but effects from mold—especially black mold—are more severe.

Health risks some with the presence of both mold and mildew, but the effects of mold—especially black mold, or Stachybotrys chartarum—are much more severe. People can suffer mild respiratory problems, sore throats, and headaches from mildew. Mold, on the other hand, can affect the nervous system and result in memory loss, headaches, mood changes, and depression. Mold also can cause skin and eye irritation, congestion, respiratory illnesses, and general aches and pains. Because of this, eliminating both mold and mildew as soon as they’re detected is essential.

RELATED: 3 Steps to Remove Mildew from Your Home Exterior

Mildew can be removed with household products and cleaners, but removing mold is more complicated.

A major difference between mold and mildew is how to eliminate each. Standard household cleaning products and a scrubbing brush work on mildew, which exists on surfaces. Once a fungus has been identified as mold, however, it’s important to establish what kind of mold it is because the procedure for removing it varies depending on the type. Some types of mold can be removed with bleach or specialized cleaning products while wearing protective gear like a mask and goggles. Others, namely Stachybotrys chartarum, require hiring a mold removal professional.

Some jobs are better left to the pros
Get free, no-commitment estimates from mold removal experts near you.
Find local pros

The 6 Best Home Improvements You Can Make in Allergy Season

How to Test for Mold in Your Home