Solved! What to Do About a Stinky Sink

If your kitchen sink is raising a stink, neutralize the situation with one or more of these seven fresh solutions. 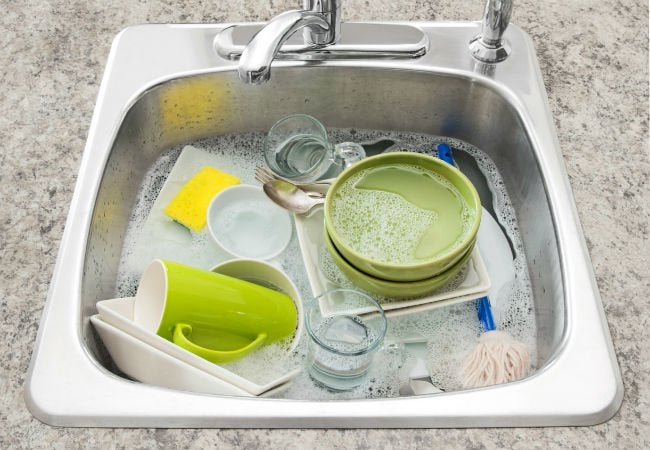 Q: There’s a rancid scent in my kitchen that makes meal prep and cleanup miserable—and I’ve traced it to my stinky sink. What’s causing this offensive odor and how do I get rid of it?

A: Sink odors most frequently emanate from food remains that have stuck on or inside one or more components of your kitchen sink plumbing system and begun to decompose. Until you find and clean the exact component where the food debris resides, the odor will persist in your sink. Read on to learn about which parts of a sink plumbing system are the most common sources of odor, then find out how to properly clean each one to restore a fresh-smelling sink.

Soak the sink in soap and water.

Sink stink sometimes stems from food residue that has dried on the base or sidewalls of the sink basin after soiled dishes have been left too long in the sink. To get your sink basin squeaky clean and odor-free, you’ll need to soak it: Insert a sink stopper into the sink drain, and fill the basin halfway with hot water and one teaspoon of dish soap. Use a gloved hand to swirl the contents of the basin until the soap has dissolved in the water, then let the solution dwell in the basin for 10 minutes to help loosen the food residue. Remove the sink stopper and turn on the garbage disposal (if your kitchen sink has one) to flush the loose debris down the sink drain.

Remove obstructions from the sink drain or garbage disposal blades.

If your sink still stinks, check for a utensil or hard food scrap (e.g. bones) that may have dropped into the sink drain. If lodged in the drain or between the blades of the garbage disposal, utensils can trap other food particles and prevent them from passing through the garbage disposal. Left to rot, these trapped foods will emit odors until removed.

Before removing these obstructions, unplug the garbage disposal at the wall outlet (and, if there’s no outlet, cut the electricity to the circuit powering the disposal from the breaker box). You don’t want to risk the disposal turning on while your hands are lower down in the sink! Then, shining a flashlight light into the depths of the sink drain, look for any obstructions in the sink drain or around the blades at the top of the disposal unit. If you find something, carefully pull it with a pair of needle-nose pliers.

Scour the stinky sink drain with baking soda and vinegar.

The walls of the sink drain can accumulate stubborn grease and grime with every use of the disposal. While you can’t reach all the way down the drain with a bristled brush, you can still scrub away this gunk with a combination of baking soda and white vinegar.

The metal sink flange located at the top of the garbage disposal where the disposal meets the sink drain is a common repository for food debris. This gunk is not easily rinsed away and therefore requires scrubbing to remove it. Start by unplugging the garbage disposal at the wall outlet (or cutting power to the disposal from the breaker box). Then, squeeze a few dollops of liquid dish soap onto the scrub head of a dish wand, lightly wet the bristles with tap water, then lower the wand into the sink drain to scrub the top of the sink flange. After scrubbing the sink flange, run the cold-water tap for 30 seconds to flush out any loose debris from the flange.

Sanitize the disposal blades and impeller plate with ice and salt.

Since the blades of the garbage disposal and the rotating impeller plate to which the blades are attached are all involved in macerating food, they easily accumulate food residue that can eventually emit noxious odors. Get the blades and impeller plate clean by dropping two cups of ice cubes into the sink drain followed by one cup of table salt. With the cold-water tap running, turn on the garbage disposal and run it until the ice has been crushed completely. The abrasive action of the ice and salt should loosen and lift any food debris and residue on the disposal blades and impeller plate. Down the drain goes the food residue—and its nasty smell.

Sometimes, pulverized food particles fail to escape the garbage disposal and instead get stuck on the walls of the disposal unit. There, they’ll rot and produce an unpleasant sink odor. Citric acid found in the peel of oranges, lemons, and other citrus fruits can dissolve food residue from the walls of the disposal and the sink drain, not to mention replace an unpleasant odor with a sweet fragrance. Drop three to five citrus peel fragments into the sink drain and run the garbage disposal for 30 seconds to grind the peel, release the acid, and deodorize the sink. Save the unused fruit peels in an airtight container in the fridge, and you’ll have a supply of this sink freshener on hand the next time it’s needed.

If the cleaning the sections of your sink listed above doesn’t wipe out the smell, it may be that food debris has congealed into foul-smelling sludge even further along in the system, where the main drain pipe that connects to the sewer. To clear this pipe, you’ll open the plumping through the elbow-shaped P-trap directly below it.

Start by ensuring that the disposal is disconnected from power. Then, donning gloves, place a plastic bucket beneath the P-trap and use a wrench to unscrew it from the main drain pipe. Next, insert a rubber pipe plug (which you can find at home improvement stores near the aisle of PVC plumbing) into the open base of the main drain pipe; in order to properly plug, it will need to be the same diameter as your plumbing.

Run the hot water tap until the water level rises to the top of the sink drain, then pour in a quarter cup of powdered oxygen bleach (view example on Amazon). Let the bleach dwell in the sink for an hour to disintegrate the sludge in the main drain pipe before removing the pipe plug. The loosened gunk in the pipe should flow out into the bucket below. Once the main drain pipe has emptied, use your wrench to reconnect the P-trap. Then, plug in the garbage disposal and run it for 30 seconds with the hot water tap on to flush the pipe of any loose gunk and remaining bleach powder.

The best way to prevent foul sink odors from forming? Make a habit of running cold water through the sink drain for at least 30 seconds before and after food disposal to flush lingering food remains out of the sink plumbing without inadvertently causing them to congeal (as hot water might). Additionally, stick to grinding soft foods in the disposal and avoid dropping hard food waste (bones, egg shells, fruit cores, etc.) into the sink drain that can get stuck and trap other food scraps traveling through the sink plumbing. Finally, never leave soiled dishes in the sink to harden overnight; food debris can harden in the sink basin and lead to odors.

14 Things You Should Always Keep Near the Kitchen Sink

Solved! What to Do About a Smelly Dishwasher
Advertisement

The Cheapest Ways to Make Your Home Look Brand-New Again