Which type of water heater would be best for your home? As it turns out, the answer's not that simple. Find out what considerations you'll need to weigh to find the most efficient and cost-effective water heater for your needs. 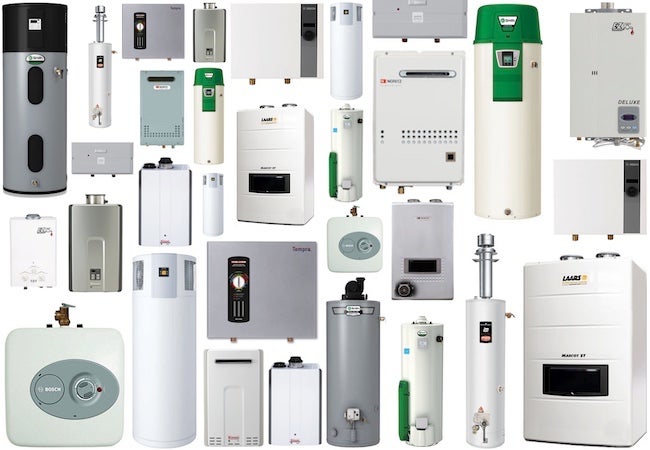 If you pore over the energy bill each and every month but rarely give a thought to your water heater, you’re missing something critical: there’s a direct relationship between the two. Believe it or not, the average household devotes more than a quarter of its total annual energy spending to the water heater alone, which means that the water heater is more expensive to run than almost any other home appliance—only heating and cooling cost more.

Under the circumstances it literally pays to weigh the options and crunch the numbers before purchasing a replacement water heater. The good news is that, largely in response to consumer demand, manufacturers now offer a range of water-heating technologies designed to maximize efficiency and minimize ongoing costs. As a result it’s a good time to be in the market but given the busy landscape, it’s also a confusing one.

Consult a pro
Find licensed plumbing experts in your area and get free, no-commitment estimates for your project.
Find Pros Now

Make no mistake: If you’ve had the same water heater for a decade, you’re probably spending more than is strictly necessary for essential daily tasks like bathing, laundry, and dishwashing. But while upgrading to almost any brand-new, energy-smart water heater would save you money on your monthly utility bill, it would be foolish to choose your next unit blindly. Why? Efficiency matters, yes—but operating costs make up only part of the value equation. It’s also critical to assess the purchase and installation costs of a new water heater. So if you’re surveying a field of water heaters, all of which are more efficient than your current model, settling on just one requires figuring out which would do the most for your bottom line over the long term.

Of course to be in a position to pick one model above the others, you must first narrow in on the type of water heater you want. Other options exist, but homeowners typically consider only two technologies—conventional storage tank water heaters on the one hand and innovative tankless water heaters on the other. Read on for details on the pros and cons of each type, and the considerations involved in making a selection.

According to Daniel O’Brian, a technical specialist with SupplyHouse.com, “traditional tank-style water heaters are far and away the most commonly used.” Uncomplicated, unfussy, and deeply familiar to their installers and repairmen, storage tank water heaters remain in use in part because old habits die hard in the building industry, but also because this tried-and-true technology has reliably served generations of homeowners.

Whether powered by natural gas, electricity, propane, or oil, storage water heaters function in pretty much the same way. The unit heats and reheats a volume of water stored within an insulated tank (typical residential tank sizes range from 20 to 80 gallons). When a plumbing fixture or water-using appliance calls for it, hot water exits the tank from the top, while cold water enters from the bottom to replenish the tank.

Conventional water heaters operate around the clock, whether you need hot water or not. Sounds inefficient, right? It is. When water in the tank cools down below a certain threshold, the appliance reheats the same water, effectively wasting energy in the process. That said, with more insulation and less standby heat loss, tank-style units now waste a lot less energy than they used to. Some even boast an Energy Star rating!

“If you have a gas water heater and you’re replacing it with a gas water heater, you can expect installation to cost about as much as the unit itself—around $300 to $500,” O’Brian says. Switching from one fuel type to another—say, from electric to gas—inevitably adds complexity and cost, but not as much as you might think. The reason? Storage tank water heaters don’t usually require any wiring or piping modifications.

There’s one chief complaint levied against storage units: Because their tanks are finite and their water-heating process isn’t instantaneous, it’s possible to run out of hot water temporarily. As O’Brian points out, “if you always seem to be running out of hot water, that suggests you need a bigger unit.” In other words, so long as it’s properly sized to meet peak demand, a tank-style unit doesn’t run out.

Tankless water heating isn’t new per se. Just look at the point-of-use tankless heaters that have been popular for many years, especially in Europe and Asia. In the United States, tankless, whole-house water heating caught on only relatively recently. But now more and more manufacturers seem to be producing more and more tankless units—and the professional service community has adapted—all to accommodate rising homeowner demand.

Dramatically smaller than traditional water heaters—small enough to mount on the wall—tankless units live up to their name. Rather than constantly maintaining a standby supply of hot water, they heat water “on demand,” as O’Brian puts it. Cold water enters the tankless unit then exits a split second later, fully heated to the target temperature by either a gas burner or electric resistance heating coils.

By virtue of their clever design, tankless water heaters operate up to around 30 percent more efficiently than their tank-style cousins. Wow! But note that tankless units command a premium price, double or even triple that of conventional units. In other words, before a tankless unit starts saving you money, its efficient operation needs to make up for its elevated up-front cost.

In addition to being more expensive up front, tankless water heaters also cost more to install. “Think of it this way,” O’Brian says, “when you’re installing a conventional unit, you’re typically hooking it up to the home as is. But when you install a tankless unit, modifications must be made.” The upshot? Whereas traditional water-heater installation costs around $500, tankless installation costs double, or more.

If the tank in a conventional water heater places a limit on output, then units without tanks promise limitless hot water. Complicating matters is that, as O’Brian puts it, “Never running out of hot water isn’t the same as always having enough of it.” If demand spikes—if you hop in the shower at the same time that the dishwasher’s running—the relatively low flow rate of a tankless water heater may not be able to keep pace.

Choosing the right water heater for your home and your family ultimately involves weighing a surprising number and range of considerations—”everything from how much water you use to how long you plan to stay in the home,” O’Brian says. Which type of water heater delivers better energy efficiency? That’s easy—tankless. Which would be the most cost-effective choice in your situation? Well, that’s a much harder question to answer. “Unless you do the math,” O’Brian concludes, “you won’t know for sure.”

Consult a pro
Find licensed plumbing experts in your area and get free, no-commitment estimates for your project.
Find Pros Now

How To: Get Rid of Every Carpet Stain

The Most Popular Home Renovation Projects in America—And How Much...