In search of a tree that looks good all year long? Colorful leaves come and go, but white tree bark is striking no matter the season. 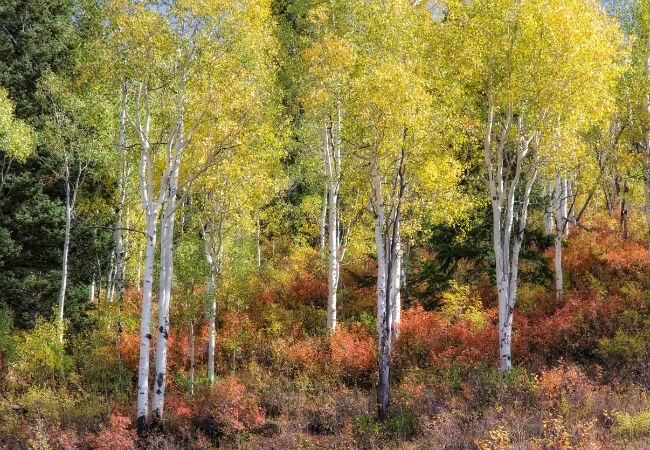 Often, trees are selected and grown for their foliage, fruit, or flowers—seasonal features that blossom and fade over several months. However, it’s not impossible to find deciduous trees (those with leaves that drop over the winter) capable of delivering beauty year-round. The key is to narrow your search to trees with white bark. Even in winter months, when barren, uniquely alabaster branches offer a striking contrast against dark siding, a backdrop of evergreens, or even against the winter sky.

While trees with white bark are not rare, they’re not as common as other trees for two reasons: Certain varieties require particular growing climates, while others are subject to disease and insect infestation. Before choosing a tree, make sure it’s suitable for your geographic region by consulting the USDA Plant Hardiness Zone Map, which indicates the coldest average winter temperatures by region.

Keep in mind that some white trees have additional geographical requirements on top of hardiness zones, such as altitude limitations, so do your homework to determine which trees to grow and which trees to avoid. The following six types of trees are among those most commonly chosen for the beauty of their white bark.

The 6 Best Trees with White Bark

While their growing ranges are limited in scope, the following trees thrive in specific regions and under particular growing conditions. Planting a white bark tree will add visual interest to the landscape and help increase the property’s value.

You may be familiar with some species of birch that have beige or brown bark, but a select few species of Himalayan birch (Betula utilis var. jacquemontii) feature creamy white trunks and limbs. Native to the Himalayan region, these birch trees prefer cool, well-drained soil and full-to-partial sun exposure. These birch varieties grow best in zones 1 through 7, although areas where summer temps regularly exceed 80 degrees Fahrenheit can be detrimental to their growth. If you live in northern areas of the contiguous United States, Canada, or Alaska, check out the following trees with white bark—though very similar, each has a few unique qualities.

While the trees, themselves, love full sun, the ground around their roots should be shaded. This can be accomplished by adding a layer of hardwood bark mulch around the trunk. Additionally, Himalayan birch trees are prone to infestation by sawflies and aphids, and they can develop diseases, such as rust and leaf spot. For the best results, have the tree checked annually by a tree professional (arborist) and treated as necessary to keep it in top health.

For fans of colorful autumn foliage, nothing beats the brilliant gold and orange show put on by a grove of Aspen trees on the side of a forested mountain. The American Aspen (Populus tremuloides), also known as “quaking aspen” or “trembling aspen,” produces a smooth–bark white tree trunk that can reach 80 feet at maturity with a narrow crown spread of only 20 feet. American Aspen’s striking white bark will develop contrasting black markings as it matures, which add to its visual interest. In optimal conditions, American Aspen is a quick grower, growing as much as four feet per year.

This soaring tree grows best in zones 2 through 7, and while it likes full sun, it doesn’t care for summer temperatures that regularly exceed 85 degrees Fahrenheit. It also will not abide low elevations: American Aspen rarely grows at elevations less than 2,000 feet, and grows best at elevations between 5,000 to 12,000 feet. By entering your city and state on this interactive elevation map, you can determine if an American Aspen is suitable for your area. (Bonus points if you’re in the right elevation range and located near banks and streams, as these trees with white bark thrive with plenty of water and well-drained soil.)

With its tall, lean stature, American Aspen is well-suited to growing in clumps, and when planted three to five inches apart will produce a multi-trunk effect. It’s just as attractive when planted individually along fences and property lines, or anywhere else a statuesque border is desired. Aspens spread by root shoots, so a few clumps of aspen could become a spectacular grove in 15 to 20 years.

Reaching an average height of 100 feet at maturity with a similarly wide crown spread, the white bark American sycamore (Platanus occidentalis) is a dramatic addition to a large landscape. It grows well in zones 4 through 9, averaging two to two-and-a-half feet of growth per year. It produces insignificant yellow-red flowers in spring that give way to large green leaves (up to nine inches wide) in summer. Brownish non-edible fruit balls develop in summer and eventually dry out, bursting open to release downy seeds. Its mottled white bark, which starts out brown and turns creamy white after 10 to 12 years, makes it a favorite in the winter landscape.

Due to its large size—the average mature trunk measures three to eight feet in diameter but has been known to reach as wide as 16 feet—it needs plenty of room to grow. Historically, the trunk of this tree with white bark was favored by Native Americans who would hollow it out for canoes.

American sycamore is best suited as a single specimen tree in a large area where it can reach its full growth potential. It thrives in well-drained, moist soil that’s high in organic matter. The largest American sycamore specimens are found along waterways, so plant this tree near a pond or stream for the best results. While American sycamore prefers a location where it receives full sun, it will tolerate light shade.

If you live in zones 9 and 10 and are looking for a fast-growing, white bark tree that won’t lose its foliage during the winter months, consider planting a Ghost Gum (Eucalyptus pauciflora). Native to Australia, the Ghost Gum, also called “snow gum” and “white sallee,” has made a name for itself in warmer regions of the US. With its ability to grow up to three feet per year, it doesn’t take Ghost Gum long to become a specimen in the landscape.

It reaches 45 to 50 feet in height with a crown spread of 25 to 30 feet at maturity. In addition to its creamy colored smooth bark, Ghost Gum features attractive gnarled branches, and the tree emits a faint but distinct aroma of eucalyptus. From October through December, Ghost Gum blossoms cover the tree in an explosion of delicate white flowers that offer a striking contrast against its deep green waxy leaves.

This variety grows in all types of soil, won’t mind drought, and flourishes in full sun (although it will tolerate partial shade). Perhaps unsurprisingly, it also thrives in salty coastal regions. Its rapid growth rate and tough demeanor—resistant to smog, insects, and diseases—also make it a good choice for planting in urban neighborhoods. It grows well in various soil types—from loamy to sandy but is susceptible to damage from beetle borers and root rot. Ghost Gum makes an excellent single specimen tree but is just as attractive when planted in groups of three or more.

Native to Europe and Central Asia, White popular is now grown in many countries, including zones 3 to 8 in the United States, where can become a remarkable focal point in the landscape. White popular produces silvery-green foliage, and at maturity, it reaches 50-75 feet, with a crown spread of up to 75 feet, making it well-suited for growing on large open lots.

The bark on white poplar produces a light green tinge when the tree is young but will mature to a white base with contrasting black patches and dark furrowed ridges. White poplar needs a sunny location with at least 6 hours of direct sun per day, and it prefers well-drained soil. However, it is tolerant of high moisture levels and will even withstand occasional flooding conditions.

An attractive specimen in the winter landscape, the tree is popular with nesting songbirds and squirrels. For all its positives, although, white poplar is not without challenges. The tree propagates itself quickly through sucker growth, so surrounding grounds should be carefully maintained to keep new suckers from growing.

Related to American aspen and grown for its silvery-white bark that’s delightfully interspersed with patches of golden yellow, European poplar is commonly found in New England. It will survive as far north as USDA zone 2. Its bark remains smooth its entire life and the tree is often harvested for use as a veneer on high-quality wood furniture.

European popular grows quite tall, reaching 130 feet and producing a dense crown spread of up to 33 feet. The trunk base itself can reach 3 feet in diameter at maturity, making the tree well-suited to large lots and parks where its shimmery foliage can be enjoyed in summer and its stark white bark admired in winter.

The European poplar does best in a sunny location and thrives in moist but well-drained soil. It can be planted as a single specimen tree or in groupings of three or more in borders or privacy screens.

FAQ About Trees with White Bark

White bark trees are alluring and beautiful in the winter landscape when their trunks and branches provide a stark contrast against buildings and gray skies. For those looking to incorporate the beauty of white bark trees in the landscape, some questions are to be expected.

What type of trees are white?

Among the most common types of white bark trees are varieties of aspen, birch, poplar, sycamore, and gum species.

What kind of tree has bark that looks like paper?

A type of birch, paper birch (Betula papyrifera), produces peeling white bark that resembles sheets of paper flaking off the trunk and branches.

What is the tree with large white flowers?

Several trees produce large white flowers in spring, with two of the most common being Southern Magnolia and White Dogwood.

Also called “Silver Poplar,” the white poplar grows as tall as 75 feet with a crown spread just as large. At maturity, its white bark develops contrasting black ridges that offer a visually interesting design element in the landscape.

While most deciduous trees can be quite dull in the winter landscape, with their brownish-gray trunks and branches, white bark trees produce a stark contrast against houses, buildings, and gray skies. However, getting the right one requires researching the species to ensure it will thrive in a specific region.

6 Types of Maple Trees You Might Find on Your Property (Including...
Advertisement

Solved! Why Are Trees Painted White?

9 Types of Mulch to Keep Your Landscape Lush

The Dos and Don'ts of Landscaping Around Trees